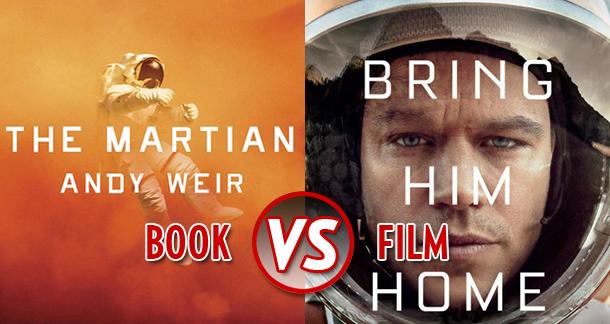 I knew I was in for something a little different with the film, The Martian, when it started with the complete mission crew on Mars. It makes sense chronologically, starting at the moment just before crisis, when Mark Watney is abandoned, but it is a subtle and significant change from the novel, which starts with Mark all alone, filling in the backstory. This focus continues throughout the film, with Mark as an important (probably the most important) member of the team, but NASA and its astronauts remain a significant part of the story.

Essentially, the film is a much more external experience than the book is. The book is told in first person narration, through Mark’s diaries. That POV allows us to be right there with him, in his head, experiencing his frustrations and his triumphs. While I think that would be possible to capture in a film (think of Moon, as an example), Ridley Scott makes the decision to tell a bigger story, set against the wide backdrops of Mars, and that works well for this kind of movie.

The trajectory of the film is also interesting. The arc of the book sits everything on Mark’s shoulders. As mentioned, even with the diversions to show us Earth and what’s happening with NASA, Mark is the central character, and his successes and failures provide the emotional moments in the novel. Even when NASA does something (or fails at something), it matters because of how it’s going to affect Mark.

The film, on the other hand, switches gears about halfway through. It shows Mark on the receiving end of instructions from NASA. NASA tells him how to hook everything up for his rover ride and they tell him how to reconfigure the MAV. Then it’s the rest of the mission crew that have to intercept him. In the novel (spoiler alert), an accident fries the relay that Mark uses to communicate with Earth (upping the tension) and then he’s on his own again.

So many of the plot points of the book are present in the movie, but how they’re presented is slightly different. Back before the movie came out, I wrote an article talking about things the movie would need to have in order to accurately capture the spirit of the book. While writing this, I thought why not use that as a scorecard to see how it really matched up.

As I previously mentioned, the book helps draw us in by making Mark Watney likeable. How does Matt Damon stack up? In the interest of disclosure let me say that I’ve never really been impressed by Matt Damon. I don’t necessarily dislike him, but I feel that he’s inherently bland.

Maybe that’s why I felt that Damon’s Mark Watney was just...generic. In the book, Mark’s personality has to do a lot of the work. The film almost seems to wipe its hands and put most of that burden on Matt Damon’s public persona, as if we should like Mark because we like Matt Damon. Mark is essentially Matt Damon, the botanist astronaut. It’s not a bad idea, I suppose, and he ends up being likeable, mostly due to the humor (see below), but I missed the more sassy Mark of the book.

The film is funny, which is good. They mostly take the humor directly from the book, maintaining a “if-it-ain’t-broke-don’t-fix-it” approach. But it helps that they have an amazing cast. Actors like Chiwetel Ejiofor, Donald Glover, and Michael Peña, in addition to Matt Damon, help deliver the lines that make us laugh.

That being said, I felt that the film focuses more on the darkness inherent in Mark’s situation. In the book, a lot of that lurks behind Mark’s words, and sometimes behind his levity. In the film we see far more of it plainly. Luckily, there’s enough humor to balance out those moments (though I would have appreciated even more).

The film does focus on Mark’s use of science to solve his problems, but it’s something we’re mostly told rather than shown. The science is streamlined and dumbed down so the audience is given the gist without having to go through the details. For example, rather than explanations of molecular chemistry — used, for example, in generating water  — we get a simple explanation about burning hydrogen and then we see water being made.

In many ways, the film is about the outcomes. Mark does science and grows potatoes. Mark does science and builds a communications rig. The book focuses far more on the process. We see it being worked out and we’re there with Mark as he attempts it. The extra real estate in the book allows us to stay close to him throughout all of this, whereas the film must depend on the tried and true Hollywood shortcut — the montage.

The film also emphasizes determination over scientific knowledge. The credit for Mark’s survival in the book (oops, spoilers) goes to his scientific abilities and later NASA’s. Every triumph that happens is because science helped show the way.

In the film, however, the science is minimized and Mark’s survival, both on Mars and coordinated from Earth, comes about because he is determined to stay alive and the people at NASA are determined to save him. This is, of course, something that’s easier to show on film and something audiences are more familiar with. Even the ending of the movie, in a scene absent from the book, stresses this idea. It’s not a bad one, but I preferred the book’s focus on science.

As I predicted, this is one of the areas in which the film outdoes the book. Seeing the visuals of Mars — huge and barren — helps show us, truly show us, Mark’s dire situation. The images are stunning. And seeing Mark, all alone, sitting on a Martian rock as he contemplates his death, does so much work in just a couple of minutes.

An aspect I didn’t expect is that watching Matt Damon move boxes and crates around and go in and out of the airlock to set up his farm helped to translate the tediousness of that kind of work. It’s something that’s there in the book, but in the film I felt it more somehow. And that one night as a Martian storm rips the surface and Mark has only a thin plastic cover on one side of the HAB was truly frightening.

Thank god they kept the disco. In the book, Mark listening to disco serves a few purposes, but perhaps the most poignant is that it shows him trying to connect to something human, to another person, Commander Lewis, through her belongings. The film essentially keeps the entirety of this thread, with the added benefit of being able to play us appropriate songs. But in the film it’s mostly relegated to comic relief. And if anything, it does more to develop Commander Lewis’ character than it does Mark’s. In a moment lifted from the book, Lewis gets a message from her husband back on Earth showing her a vintage disco album on vinyl that he found and bought for her. On the screen, it’s a more powerful moment, but it is Lewis’s moment. That works for the film because she’s a larger presence. We also get a few references to Happy Days, but unfortunately no Three’s Company or Dukes of Hazard.

Ultimately, what the film does well is what the book does well. It puts Mark in a seemingly impossible situation and then gives him, and others, the opportunity of trying to get him out. For each success, too, there are further complications so that the tension and the stakes keep getting more severe. In the film, there’s more of a team feel, but thankfully the tension doesn’t suffer. The film also cuts a few crises (a couple of which I missed—- the exploding HAB, the shorting out of communications) but still manages to keep the viewer on the edge of their seat.

In the end, the film is about perseverance and tenacity whereas the book is about ingenuity. It’s a subtle difference, but a significant one.

If you’ve seen the film and read the book, I’d love to hear your thoughts on both and which you preferred in the comments.

I haven't seen the film yet, but I'm actually glad to hear it focuses more on the darkness of his situation.  I really liked the book, but what really bugged me (among a couple other things) was that there was no sense of gloom.  On one hand, that's not the type of book Weir was setting out to write (and the book he set out to write, he wrote very well); on the other hand, the gloom is such an inherent part of his situation, it didn't feel like a complete story without it.

On the third hand (magic hand), because Mark's story was told through journal entries, it is totally probable that he only presented a certain version of himself.  And after all, the entries were there to track the science above everything else, so the upbeat attitude during the entries, as a character who is stoked on the science, is fitting as well.