Book vs. Film: 'A Christmas Carol' vs. 'Scrooged' 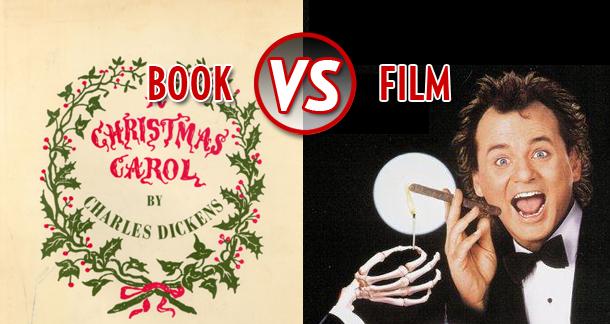 Charles Dickens’ A Christmas Carol has had more film adaptations than just about any other book in the English language, beginning all the way back in 1901 with a silent short titled Marley’s Ghost.  Ebenezer Scrooge has been reinterpreted not only by live actors, but by Mickey Mouse, Mister Magoo, and the Muppets. Anyone who’s ever watched television around the holidays is likely to already have a firm understanding of the story, as well as who Ebenezer Scrooge is and what he’s supposed to look like.

So, all of this begs the question: is it even possible to create a unique retelling of a story that’s been rehashed so many times? After viewing the 1988 production, Scrooged, I have to admit that there might be hope (if hope looks like Bill Murray in the ‘80s and wears a greasy mullet).

Be prepared for some character changes, first of all. Murray plays a modernized version of Scrooge, a television mogul who goes by the name Frank Cross instead of Ebenezer.

It oozes ‘80s cornball, and yeah, I’m pretty sure the Ghost of Christmas Present was on crack cocaine, but this movie definitely has its heart in the right place.

Murray’s character is manic and narcissistic, whereas Dickens’ Scrooge was a bit more of a crotchety, understated workaholic. The original Ebenezer wanted money, sure—that’s one of Scrooge’s most dominant traits—but he also sought solitude and isolation, locking himself away in a cold and empty house after work. Alternately, Frank Cross is comfortable hamming it up on an awards stage and flattering the pants off people he secretly loathes. He’s an incredibly arrogant and disingenuous human being. To be honest, he makes Dickens’s original Ebenezer look almost modest by comparison.

But the most intriguing aspect of Scrooged, to my mind anyway, is that it’s the only version of A Christmas Carol I’ve seen which utilizes so many elements of metafiction. The majority of the story takes place in a television studio, on the scene of another production of A Christmas Carol. It’s so self-referential, even Frank Cross can’t always tell when the people on set are real spirits or actors that he hired in costume. The decision to make the ominous Ghost of Christmas Future's face a television is also very interesting, especially given that a lot of what we view on American TV gravitates around death (a consistent theme that's explored throughout Scrooged).

It bears mentioning that Scrooged doesn’t skimp on the darker parts of Dickens' original—it is technically a ghost story, after all. Many versions tend to leave out or tone down these aspects of the story, since they don’t fit in with the feel-good vibe of a homogenized Christmas special. For instance, mankind’s emaciated offspring, aptly named Ignorance and Want, are often discreetly edited out.

Also unlike Ebenezer, Frank Cross has the benefit of the 200 years of Scrooges who came before him, so there are moments when his suspension of disbelief drops, and he’s able to put together the pieces of what’s happening to him and why. But even still, he’s not immune to it, as the spirits point out when he tears up after seeing his mother—“Niagara Falls, Frankie angel.” I love the idea that this is a recurring setup, that a “Scrooge” is not just one man, but a man that just about all of us know in some facet of our lives.

A major part of why Dickens wrote A Christmas Carol in the first place was to draw attention to the plight of the lower classes, with whom he continued to sympathize even throughout his rise to fame as a literary star. A consistent interpretation of Scrooge’s character is that he stands as a symbol of the cruelty of the aristocracy.

Many modern adaptations have a tendency to get caught up in the trappings of the story, and part of the brilliance of Scrooged is that the movie actually points this out, going so far as to chastise the audience for not turning the screen off to enjoy Christmas. A glitzy live TV production with celebrities, scantily clad dancers, and a hyper-aggressive advertising campaign just about hits the nail on the head. The real problem is that the social issues of Dickens’ London have not gone away; they’re as prevalent as ever.

And for that, if nothing else, Scrooged is a pretty successful adaptation of the original tale. Of course, details are different. But with a story that’s been redone so many times, it's almost necessary at this point. It might not be for everyone; it oozes ‘80s cornball, and yeah, I’m pretty sure the Ghost of Christmas Present was on crack cocaine, but this movie definitely has its heart in the right place.

Book Brawl: A Christmas Carol vs. How the Grinch Stole Christmas

THANKS!  I pulled all my DVDs to put in a case to take to Christmas this weekend with my side of the family and forgot about Scrooged.  LOVE that movie.  I only wish my dad could get me a slab of veal this year.

Scrooged is definitely an 80s movie when it comes to hairdos and tech, but it's also timeless in that it criticizes American greed, celebrity culture, and the wonderful but slippery invention of television. It's very true to Dickens's original text both in atmosphere and theme, but it jolts in some comedy and forges its own path.

And yeah, the cabbie is totally cracked out.