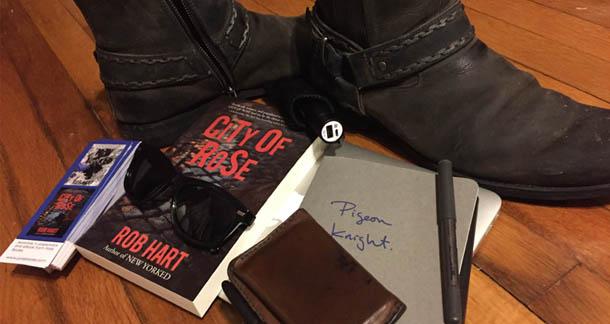 I am both thrilled and horrified that, in a few days, I'm embarking on my first book tour.

Horrified because, what if no one shows up to my events? What if a LOT of people show up and I do something stupid, like trip and fall on my face? What if a stranger offers me candy and I accept because what kind of lunatic says no to free candy, and I end up getting tortured in some basement in the middle of nowhere?

There is a lot to consider here.

A lot of authors are skittish on book tours—it's a big investment of time and money. The number of books you sell might not be enough to cover the overall cost.

Personally, I think it's worth it. First, because I love traveling, and also burritos, and the West Coast has awesome burritos. Second, because I'm right at the start of what I hope will be a career. It behooves me to go out and meet some new people. I am going to miss my wife and my daughter terribly. This is the longest I will be away from either of them, and that kind of sucks. But, this is the game.

LitReactor has been kind enough to let me do a book tour diary. So for the first entry, I wanted to share how the tour came together, what I'm planning to pack, and what my goals are for the trip.

A lot of authors are skittish on book tours—it's a big investment of time and money. The number of books you sell might not be enough to cover the overall cost.

The only reason this is happening is because both Powell's and Seattle Mystery Bookshop asked that I come out and do events with them. And good god damn it is nice to be wanted. Since I was going to be on the West Coast anyway, I figured it would be good to try for events in San Francisco and Los Angeles, since I know a bunch of people in both cities.

My publisher tried to set up bookstore signings, and found two things: They were either booked up way in advance, or they weren't interested because I am not a celebrity or best-seller. We could have kept soliciting bookstores, but honestly, I feel good with the itinerary—I was able to jump in on a Noir at the Bar in Los Angeles, and Joe Clifford was kind enough to set one up in San Francisco, since fellow crime guys Johnny Shaw and Owen Laukkanen will be roaming the coast to promote books at the same time.

In total, I've got five events in four cities. I need to get some writing done in between, plus allow for travel, plus make time for drinks and grub with pals. This feels like a good, manageable mix.

I'm not going to talk the exact cost breakdown, but I will say that, since the bookstores in Portland and Seattle requested me, my publisher is picking up that portion of the travel tab. I set up the stuff in San Francisco and Los Angeles, so I'm paying for those legs myself. This, honestly, was a big surprise to me. I had been socking away cash for this trip, so I was already in pretty good shape, but it's incredibly encouraging to be with a publisher that's open to an investment like this.

Even though I'm not doing bookstore events in California, it's good to get out in front of readers, and Noir at the Bar readings are a good place to do that. I'll have some books to hand sell and plenty of bookmarks to give away.

And, most importantly, I've got a plan for my reading that will, hopefully, leave an impression.

(You don't actually have to RSVP to any of this stuff to attend. It's just that headcounts are nice.)

Here's the stuff I plan on bringing with me. Why am I telling you this? Because I love those goofy "go-bag" posts on sites like Lifehacker. And I like gear.

11-inch MacBook Air: I need to stay on top of MysteriousPress.com and LitReactor stuff, as well as write diary entries for this site, plus work on the final draft of my third novel (due to my publisher March 1), plus a big secret project that’s due March 14, plus whatever else pops up between when I leave and come back. This is a working vacation.

Anker PowerCore+ mini 3350mAh Portable Charger: For when my iPhone is running down and I can’t find a place to charge it.

Bose QuietComfort 25 noise-cancelling headphones: Seventeen hours of flight time. This might be the most important thing in my bag.

Good boots: Less formal than dress shoes and more formal than sneakers. I wore these boots one day at AWP, where I walked the equivalent of six miles over twelve hours. They were comfortable from beginning to end. Plus, they’re easy to get on and off going through airport security. I would marry these boots if I could.

Kindle: Lots of reading to do while I’m away. Here’s my reading list—research for the next Ash book:

Wallet with built-in pen: This is the Charette Wallet from form.function.form. It has a space pen built into it, in case I find myself in a situation where I need to sign a book underwater, or in zero gravity. It also comes with a mini Moleskine, but I took that out. The important thing is: You will never find yourself without a pen again.

Moleskine notebooks: Currently working on notes and outline for the fourth Ash McKenna book. I like the slim, floppy Moleskines. I keep a different one for each project.

Cool sunglasses: So I look like a cool guy.

Second is, with all the time I'm going to spend sitting in airports or on planes or just generally by myself, to do one more hard pass on South Village, the third Ash book. I'd love to get it into my publisher by the time I get home. I think I'm almost there.

So besides keeping up with work stuff, I'll be doing a lot of editing. And the tour diary for this site. Which, I don't know what it'll be about. We'll see!

Anyone out there got any travel tips to share? Stuff I should see? Places I should eat, with an emphasis on burritos? Questions about the process? Comments? Am I wasting my time?

And if you're in or around any of these places at the same time as me—I hope you come out.

Well, I'd definitely stop by the Portland one. Unfortunately, I'm out in the middle of the Pacific ocean. But good luck and good touring!

Interesting column, Rob, thanks for sharing it with us. Good luck with your tour :)