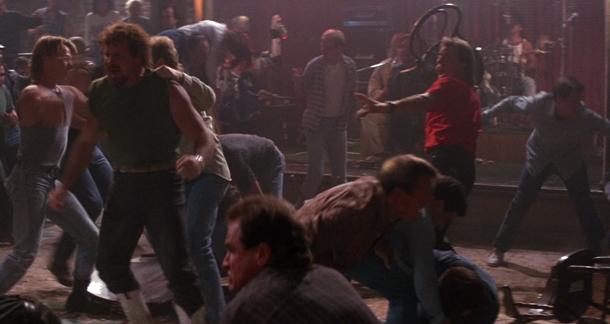 The experiment takes place over Memorial Day weekend, a converged idea of four different authors in various stages of their careers. It’s at the behest of Phil Jourdan, founder of Perfect Edge Books and touring author of the recently released Praise of Motherhood, that the remaining trio of us (Brandon Tietz, Caleb J. Ross, and Gordon Highland) are left to devise a couple of live readings: one bar, one bookstore.  Both in the Kansas City area.

Naturally, when setting these things up comparisons come to mind, the advantages and disadvantages of a particular venue and its amenities. The author tends to choose these the same way they would a restaurant or local watering hole. It’s a certain criterion of need and a much longer wish list of wants. After it’s determined that there will indeed be a stage from which to speak and chairs for an audience to occupy, the inner-diva of the author rears its ugly head in the form of frivolity and technical requirements. We’ve surpassed simply getting up on our soapboxes and saying what we want to say; the soapbox should have Wi-Fi. It should run on the 4G network and take HD video. We can’t just get up there and read; we need a live Twitter feed and corresponding hash tag to go with it (in this case: #shitauthorssay).

Much like the game of literature itself, the art of the live reading has evolved. We have to go bigger, be bolder, and it may be to the point where the local bookstore can no longer contain these youthful ambitions. So let us compare:

The Thursday night venue is Czar Bar, an almost hole-in-the-wall dive that pours heavy on the drinks and serves up some of the best greasy food in the city. It’s a long dark room capable of holding about eighty people, bar on one side and then many chairs and tables throughout. The vinyl seating is slashed and duct taped. Most of the tables wobble. It’s reminiscent of the Bat Cave, but filled with hipsters and chicks who drink Stella and Newcastle because “PBR is out.” At the far end of the bar, the house lights beckon for an author to get their ass up there and put on a performance, but as I always tell people, “These things never start on time.” So we drink, occasionally stepping out onto the patio for a cigarette while we go over our prose pieces one more time. People mingle or get reacquainted, the din of conversations getting louder as the audience files in two or three at a time.  And there’s a tension that builds in the air unlike that of a normal author event. I never, not once hear the word “reading.” Everyone keeps asking, “When does the show start?”

The Saturday venue is Prospero’s, a literary staple here in Kansas City as far as independent bookstores go. You can read LitReactor’s Indie Bookstore Spotlight article about it HERE. Of course, this article only covers the main two floors where consumers can pick up books, movies, and vinyl records. There’s a semi-secret third floor to Prospero’s, a performance space that’s only open to the public when authors are laying down live prose. It’s charmingly unfinished: the door to the bathroom is actually an industrial curtain, wood shavings everywhere, shop tools are pushed against the walls. The space is very much a work in progress, and unyieldingly hot as there’s no air conditioning set up for this particular area of the building. There’s no stage per se, but the designated area in which the author reads is apparent by way of the plastic folding chairs and how they’re angled off. Patrons file in, some of them stowing cans of beer in the oversized sink filled with ice. There’s no off-the-street foot traffic or randoms like there was on Thursday. Everyone knows exactly why they’re here and what they are about to see. It’s a literary reading, your classic “stand up and recite what’s on the paper” kind of affair.

is abundant (45-50) and a bit rowdy with the beginnings of a beer buzz already turning on, so the author must rise to the occasion. Attention will not simply be handed over; it must be earned, and this instills the feeling of being on some kind of proving ground. We can’t simply walk under the bright lights and spit words. We have to perform. We have to win the crowd over like some literary version of Gladiator. If there was ever a time to turn on the charm, the charisma, if only for the sake of being engaging—it’s here. So we push the buttons of the audience with a Lane Bryant talent search cold opening, with poetry that smokes, and readings about mothers who’ve passed on that make a table of girls cry their mascara off. We do skits and give away drinks. We read, but only what we think will garnish the most attention. For a place like this, the piece that looks good on paper isn’t always the best option. Sometimes you have to consider what’s going to entertain or emote a wave of laughter.  Bottom line: you have to put on a show.

the crowd is thin…about ten people total. It’s quiet. Compared to the din of bar noise and loose talk, the silence is a bit disconcerting. The audience plays by movie theater rules: they turn their cell phones off, sit quietly, and sip their beverages in a way that generates the least amount of noise possible. It’s complete submission to the author and what they’re about to do, and so the performance changes. There’s opportunity to be a little bit more complex and deep. The stories don’t have to jump out and grab the audience by the balls. We’re off the proving ground, having inherited a ready-made, attentive audience simply by showing up. There’s no battle or competing for anyone’s ear. The reader reads; the crowd listens. Prospero’s is not only a safe environment where it feels like nothing can go wrong, but it’s also nurturing of the literary art form.

Although my contemporaries would probably disagree, a large part of me has always believed that live readings should do more than what the prose does on paper alone. It is the difference between simply buying the album and going to the concert. Therefore, we should not simply read. We should perform. We should do the things we can’t do in print, and the bar reading appears to be more encouraging of that. Or perhaps I’ve become desensitized to the unnerving nature of getting up in front of a crowd of strangers and am now compelled to up the ante. As filmmakers and musicians take more risks, so must the author, it seems.

This isn’t me saying that the bookstore reading is dead. Far from it. But the game has most definitely changed from how it was ten years ago. The emerging author doesn’t have the luxury of having a tour laid out for them. They have to book their own gigs, and sell it in a way that goes beyond “come watch me read stories.” We’re integrating Twitter and prizes and booze. A certain amount of showmanship is required to get the people onboard. This is a literary affair, but one with a party-like social element to it. Coming off stage and having an audience member buy you a whiskey shot or ask for a photo to put on their Instagram feed is not uncommon. In the book store we’re authors, but in a bar, we’re a little bit closer to rock stars.

Of course, this is a ‘different strokes for different folks’ type of scenario. Some live readers relish the quiet, submissive audience hanging on their every word. Others long for the social experience of the bar after being locked away in the writer’s cave for so long. Each venue has its own advantages, but when we examine the statistics, one of these clearly worked better than the other: the bar had more people, we sold more books, we got better footage, and I think I can safely assume that we had more fun. When I wish to simply read literature, I think of the bookstore. When I want to celebrate the written word, I head to the bar.

Though, in defense of the bookstore . . . one of the attendees did offer to smoke me up beforehand. The only offers I got in the alley behind the bar were of the gear-schlepping-help variety.

I agree that the bar readings are more fun. Certainly from the audience standpoint. It's more inviting for the kinds of people who mightn't usually attend such highfalutin events. But I also feel pressure to "entertain" there, rather than present myself as the serious writer I claim to be. Like I'm competing with everyone's texting and pic-posing and assgrabbery. So my gunslinger mentality comes to the fore there, wanting to best anyone else who steps on that stage, the same way an opening band tries to blow away the headliner. I'll also heckle your ass in a bar; fair game.

At a more literate location like a bookstore, I can read whatever I want, feeling like the audience is willing to be challenged. Plus, those are the kinds of people I can actually hold a conversation with afterward, comparatively-speaking.

Regardless of the setting, any anxiety I feel (usually not much, anyway) will be inversely proportional to the size of the audience. If it's going to be in a bar, I'll take the diviest, grimiest one: something with a little history and character hewn into the walls.

I've only been to bookstore readings, and they are nice. I'd love to go to a more raucous reading and have a few beers. Look, books are cool. Reading is fun. Authors and readers can be cool and fun, too. Let's combine all the awesome stuff about life (people, good beer, books, music) and go to town!

I wouldn't say we should do away with the quiet bookstore readings, because they have their audiences, and the authors who prefer them, and I've been to some awesome ones--where the author takes the time to make it engaging and interesting--but I'd love to see more readings where the social aspect is amped up.

Bar readings are always better unless writers have to read over loud people who are just there to hang out rather than to attend a reading.