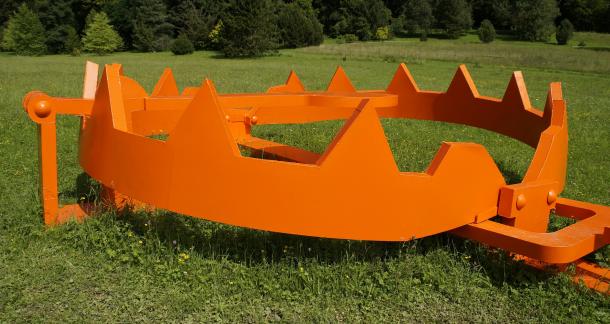 Is there anything better than the story of a scam? I've got one to get us started.

My mom, to reduce her sewer bill, came up with a scam.

My mom’s sewer bill for the entire year is calculated by the city tallying how much she puts into the sewer for one month. They get that number, multiply by 12, bam, sewer bill set.

What the city didn’t count on was someone willing to go pretty far to save a few bucks. If my mom put as little as possible into the sewer during her bill calculation month, she’d save some dough.

She bought extra socks and underwear so she wouldn’t have to do laundry. She showered at the gym. All to save, eh, probably a few bucks.

Unfortunately, her scheme came crashing down when she discovered the bill wasn’t calculated from the first of the month to the end. The tracking period straddled two months, starting on the 15th of the first month and running to the 15th of the second month. So my mom spent the first half of her measurement time using as little water as possible, then the second half using way more than normal. The bill evened out and she would have to wait another year to give it a second go.

Selling and promoting books through good, honest work is great. But there’s something to respect about a workaround, a scheme. A good ol’ scam.

Besides, even when it doesn’t work out, it’s fun to tell people about later.

This one comes to me from a relative who was mentoring a young person entering college.

Imagine you’re a doctor who wrote a memoir/advice book. One way to move copies would be to write a great book and promote the hell out of it.

Another option: Slap some pages together, open up a monthly scholarship, and require that the students who want the scholarship write an essay on your book. Okay, it’s certainly operating at a loss. And, alright, this is just the smallest, tiniest step from paying someone to read your book. But the upside is that you look like a real charmer. You’re giving out a scholarship! Who can talk shit about that?

The Rounding Out the Resume Fast One

Want to be known as more than an author of crap?

Plenty of books in public domain.

Charles Dickens with an introduction by you? Why not?

Annotated Shakespeare with annotations by you? Couldn’t hurt.

If you credit yourself with a “translation” of The Dream of the Rood, will many people know that this is originally in English?

This is especially good if you’re in academic-y, literary circles trying to get taken seriously. Provided you’re not such a buffoon that people (correctly) assume you’re full of shit and set out to prove it.

You can get that little orange “#1 Seller” banner on Amazon without too much trouble if you use your head. Or your foot. This guy did it with a book that was just a picture of his foot. Now, we need to recognize this is the internet, and perhaps a foot picture is more in demand than a novel of self-discovery. But if you can rally maybe a dozen people to buy your book on the same day, and if you can put your book in a fairly unpopular category, and if you make sure and release your book NOT on a Tuesday, and if you shoot for July when there’s not a lot of book action going on, BAM, you’ve got a bestseller on your hands. Or feet.

Let’s say I fancy myself a Chuck-Palahniuk-alike as a writer.

I buy up a bunch of copies of Fight Club. Those movie tie-in copies that nobody wants.

Then, I get some info about my book printed on cardstock with one of those mailer cards, like the kind you find in magazines. Get some text like, “If you loved Fight Club, this is the book for you.” Make it look like a publisher-created thing. Glue that shit into the end of your Fight Club copies, sell them cheap as hell on Amazon, watch the sales roll in. 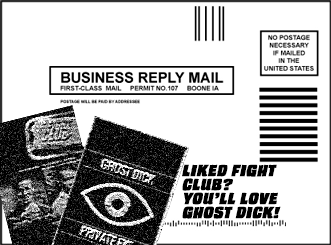 Casper Mattress does this one with their 100-day “sleep on it” trials, which you’ve heard about if you’re a podcast listener. I’m sure Casper will in fact take back the mattress after 100 days if you don’t like it, but for the most part, all of us are too lazy to return a mattress unless the thing is HORRENDOUS. It could be filled with beer bottles, but most of us would say, “I mean, the bottles are intact, so it’s not, like, jagged.” To undress a bed, carry it down the stairs, and re-box it? I mean, c’mon. If you have that kind of energy, you’re obviously using crank, in which case you don’t need a bed.

Sell your books with a money-back guarantee. Hell, in the fine print you can even put that it has to be returned in the original packaging, that you’ll only return the proceeds, not the full cost. This makes people feel like they aren’t taking a risk when in truth they’re taking the greatest risk of all: Pitting their laziness against their cheapness.

David Blaine’s puzzle was allegedly solved (I'm using the word "allegedly" a lot here, you'll notice), though I question the whole thing. A $100,000 prize buried on an estate that seemed to be rented, in perpetuity, for this purpose? And book sales would even this out? Fishy. Strauss’ stuff is still out there, and I guess if you want to trust the journalistic integrity of the person who wrote The Game, that's your choice.

This scam is very easy to manage. Just claim that your book is the guide to something of far more value than whatever shit you wrote. Shouldn’t be difficult to clear THAT bar!

There are three simple ways out:

One, when people can't find the treasure, you can always say that the interpretation of your cryptic clues is incorrect. If that doesn’t work...

Two, you can always say, “Some kid must’ve found it.” Everyone believes the story that some bastard kid wrecked everything for everyone. We’ve all been there. If that doesn't work...

Three, you bury a treasure of “great value,” without letting everyone know it’s of great value TO YOU. A picture of my beloved grandma? How dare you say it’s not valuable!

What would get students to actually study SAT vocabulary? What if there was SAT vocab embedded in erotica?

The grandma scam is where you call someone’s grandma, pretending to be her grandson, and ask for money to get out of a jam.

The reverse grandma involves Tidbits. You know Tidbits, that little “newspaper” that you can get at diners? The one old people love that tells you facts about America that probably aren’t true, but...you know what? I’m not going to attack the journalistic integrity of Tidbits.

You take out an ad in Tidbits, claiming to be a grandmother whose grandson wrote a book. You say how much you love your grandson and want him to succeed. So you bought a ton of his books, and you’d like to give them away to people who pay the shipping. Boom, your book is on old peoples’ bookshelves all over the country, just waiting to become death donations to Goodwill.

Set up a shitload of online dating profiles that drop your book's name here and there. For this to work, you probably have to pretend to be an attractive woman. Pro tip: Public libraries in small towns are a great resource for old yearbook photos.

Involving physical copies you donate to thrift stores or little free libraries, you add an exorbitant price to your book’s jacket, making it seem to some that they must be getting a great deal.

And/or: Make sure to add copies of your “rare” book to Abebooks.com and other rare book sites, eBay, what have you, and list a ridiculous price. Then, make one outlet where they can be had for a “steal” aka “actual price.”

If you’re a writer, chances are you know a writer who teaches. All they have to do is add your book to the curriculum, either as required or a list of “suggested” texts.

I know, even SUGGESTING that someone in higher ed would do this is ridiculous, right?

Tell that to the prof I had who, if you messed up anything grammatically, would force you to buy his comb-bound, home-printed “textbook” of grammar exercises. You know what, Ben? You're a jerk who’s class I hated when I was in it! Where are your grammar exercises now!?

Okay, your book lived its life, did its sales. How can you pump it up for another round?

Repackage it as an SAT vocabulary study!

Did you know that novels with SAT vocabulary words help students retain those words 78% better than flash cards?* Hopefully you answered “No” just now, because I made that up. I even put an asterisk there like it refers to something. It definitely doesn't. Turns out you can just push SHIFT+8 and boom, there it is.

I always had an idea for this, BTW. What would get students to actually study SAT vocabulary? Erotica. What if there was SAT vocab embedded in erotica? They’d be sure to read and retain everything. Now, this obviously hits a pretty hard and reasonable brick wall because it’s basically selling pornography to minors. But hey, if they’re old enough to take the SAT...eh, I won’t finish that.

You start by establishing yourself as an explorer of something, like abandoned houses. THEN, you mysteriously keep finding old copies of the same book. Why is this book at all these locations? What’s the connection? People will have to read and find out. Wink.

Want people to talk about your book? What’s better to generate chatter than fucking up on purpose?

Title with a misspelled “You’re”? Sounds like a ticket to a Buzzfeed list. Essay about how William Faulkner’s experiences shaped his novel For Whom the Bell Tolls? Sounds like a win.

It’ll crush your soul, but being wrong on purpose is sure to buy you attention.

Get Eyeing the Flash: The Education of a Carnival Con Artist by Peter Fenton at Bookshop or Amazon

Get The King of Confidence: A Tale of Utopian Dreamers, Frontier Schemers, True Believers, False Prophets, and the Murder of an American Monarch by Miles Harvey at Bookshop or Amazon