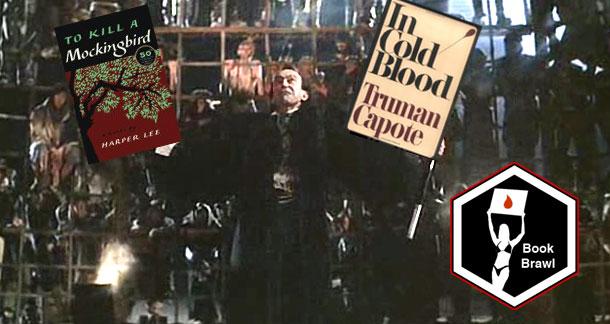 Each month I throw two books, related in some way, into the Book Brawl ring to fight it out for the coveted title of literary champion. Two books enter; one book leaves.

This month the pugilistic tomes are by childhood besties Truman Capote (In Cold Blood, 1965) and Harper Lee (To Kill A Mockingbird, 1960). How could we be so cruel as to turn lifelong friends against each other? Well, Book Brawl is a vicious beast, dear readers.

’Shoot all the bluejays you want, if you can hit ‘em, but remember it’s a sin to kill a mockingbird.’

That was the only time I ever heard Atticus say it was a sin to do something, and I asked Miss Maudie about it.

To Kill A Mockingbird is one of the great titles of American literature. The title overtly refers to the naiveté of Tom Robinson, Boo Radley, and the cruelty they each withstand at the hands of a society that does not understand them. It also implies the loss of Scout’s own innocence as she learns that the wide world is not as just and honorable as her father, Atticus. Finally, it’s a beautiful turn of phrase that rolls off the tongue with melodic ease.

In Cold Blood is starkly elegant, harsh in its simplicity. It also doesn’t stand a chance against To Kill A Mockingbird, so let’s just move this show along, shall we?

Round One goes to… To Kill A Mockingbird!

The cover of To Kill A Mockingbird is genuinely lovely, with the green leaves making a bright, striking contrast against the burgundy sky, quick brush strokes that together create an iconic image. The typography, almost like calligraphy, is sophisticated and graceful, and the color scheme is unexpectedly whimsical.

In Cold Blood has what I like to call a turn-out cover, meaning that I will always keep this book turned outward on my shelf to display its front cover to the world. The cover is dramatically uncomplicated, with the title taking up half the space in blunt, simple font. The pinprick of blood is all that indicates the horror of the tale inside, but the austerity of the cover makes it clear that In Cold Blood is serious business.

Round Two goes to… In Cold Blood!

To Kill A Mockingbird tells the story of six-year-old Scout Finch, who lives with her brother Jem and father Atticus in Maycomb, Alabama during the Great Depression. Scout, Jem and their friend Dill (a character modeled after Truman Capote himself!) are terrified of their reclusive neighbor, Boo Radley. Atticus, an attorney, defends a black man accused of raping a young white woman, and racial tensions rise as Scout learns that events--and her neighbor--are more than they seem. The novel is a classic Bildungsroman, as Scout comes of age in a dramatic way during the three-year span of To Kill A Mockingbird. The plot allows for racial and social commentary as well as a mirror into Lee’s own childhood; her father defended two black men accused of murder in 1919, for instance.

In Cold Blood is one of the first true crime books, a “non-fiction novel” (meaning non-fiction work that reads as a cohesive narrative with the storytelling techniques used in fiction). It’s about the 1959 murder of the Clutter family. Capote (along with Lee, who helped him with his research) spent six years researching the crime and interviewing the killers, Dick Hickock and Perry Smith. Many think Capote invented the forms of true crime and non-fiction novels; at the very least, he was certainly a pioneer in the infant genres. The premise is titillating, but it didn’t exactly spring from Capote’s imagination, so…

Round Three goes to… To Kill A Mockingbird!

Round Four: What A Lovely Language

To Kill A Mockingbird is often hailed for Lee’s singular style, with her remarkable gift for narration enriched by the earthy language and childlike observations of her Southern six-year-old narrator.

But I must have been reasonably awake, or I would not have received the impression that was creeping into me. It was not unlike one I had last winter, and I shivered, though the night was hot. The feeling grew until the atmosphere in the courtroom was exactly the same as a cold February morning, when the mockingbirds were still, and the carpenters had stopped hammering on Miss Maudie’s new house, and every wood door in the neighborhood was shut as tight as the doors of the Radley Place. A deserted, waiting, empty street, and the courtroom was packed with people. A steaming summer night was no different from a winter morning.

Capote’s lyrical language in In Cold Blood is shocking, simply because he sets a poetic scene as backdrop to hideous violence. And yet when the time comes for him to describe the actual crime, he speaks plainly, letting the dreadful story speak for itself.

After drinking the glass of milk and putting on a fleece-lined cap, Mr. Clutter carried his apple with him when he went outdoors to examine the morning. It was ideal apple-eating weather, the whitest sunlight descended from the purest sky, and an easterly wind rustled, without ripping loose, the last of the leaves on the Chinese elms. Autumn rewards western Kansas for the evils that the remaining seasons impose: winter’s rough Colorado winds and hip-high, sheep-slaughtering snows; the slushes and the strange land fogs of spring; and summer, when even crows seek the puny shade, and the tawny infinitude of wheatstalks bristle, blaze.

Round Four… is a draw!

Round Five: The Authors’ Influence On Each Other’s Books

Truman Capote, Lee’s childhood friend, was thinly disguised as the character of Dill in To Kill A Mockingbird.  Like Dill, Capote lived next door to Lee every summer vacation, and he entertained her with his vividly imaginative tales. Dill’s friendship with Scout is a charming, crucial element of To Kill A Mockingbird; he offers a fresh, big city perspective on the small town events in Maycomb. A quote from Capote decorates the dust jacket:

Someone rare has written this very fine first novel: a writer with the liveliest sense of life and the warmest, most authentic humor. A touching book; and so funny, so likeable.

Harper Lee was an integral part of the writing of In Cold Blood. She accompanied Capote on his trips to Kansas to investigate the crime, and together they interviewed residents and compiled thousands of pages of research notes. Capote acknowledges her on the first page of the book, with the words:

For Jack Dunphy and Harper Lee, With My Love And Gratitude.

Round Five… is a draw!

Round Six: Impact and Implications

Few novels have influenced American literature as deeply as To Kill A Mockingbird. Lee brought up themes of class, morality, gender roles and racial injustice with as much courage of her convictions as her own Atticus Finch. The novel was unabashedly progressive in its themes and in its frank discussion of rape and racism, but also deeply influential in its style. Lee reinvented the coming-of-age novel, and no Bildungsroman since has been untouched by it.

Capote’s use of story narrative in a non-fiction book was highly original at the time of publication, and true crime books were very nearly unheard of. He essentially invented an entire genre, and that’s quite a feat. Authors such as Erik Larsson, Ann Rule and Sarah Vowell have all been greatly influenced by Capote’s style in In Cold Blood. That said, the book simply cannot boast the all-encompassing impact of To Kill A Mockingbird.

And the winner is…To Kill A Mockingbird! The crowd goes wild!

This was a close bout, ladies and gentlemen, but in the end nothing can stand against the great American novel.

Do you think it was a fair match? Who’d you like to see in the ring for future battles?

EricMBacon from Vermont is reading The Autobiography of a Corpse January 13, 2012 - 8:23pm

To Kill a Mockingbird could also be one of the most overrated novels. In Cold Blood is so completely underrated, and there was nothing quite like it in its time. It was a misguided attempt at empathy journalism (sort of), and the story behind the story is even more amazing. Harper Lee is probably only still so famous because To Kill a Mockingbird was it for her. No interviews, no more major releases. In fact, her attempt at a second book sounds a lot like what Truman Capote had attempted with In Cold Blood.

In my opinion, Truman Capote is also the better writer.

Don't listen to me though, I am biased. I never got To Kill a Mockingbird.

As always, the article was well done.

edsikov from New York by way of Natrona Hts PA is reading absolutely nothing January 14, 2012 - 8:32am

Well done! Except totally wrong!  While TO KILL A MOCKINGBIRD is quite obviously a great novel, IN COLD BLOOD is a great novel that broke new ground - the "non-fiction novel," and all that. That gives it major points. It also wins the "Page Turner" round, which I just made up.

BTW: As far as film adaptations go, MOCKINGBIRD wins by a mile. Robert Mulligan is a great director; Richard Brooks, not so much.

I teach AP English in a small school district.  May I have your permission to adapt your article into an assignment?  We will read this particular article first, so I would give you full credit for the idea (I harp on the evils of plagiarism--ha!).  I simply love this idea of pitting two books against each other.  I would use this with my 10th grade pre-AP as a way to help them make deeper comparisons between books.  Thank you for your time.

Certainly! Please be my guest, and thank you for asking!

I am so happy I stumbled across this cite.  It's brillant.  Thank you.