Book Brawl: A Christmas Carol vs. How the Grinch Stole Christmas 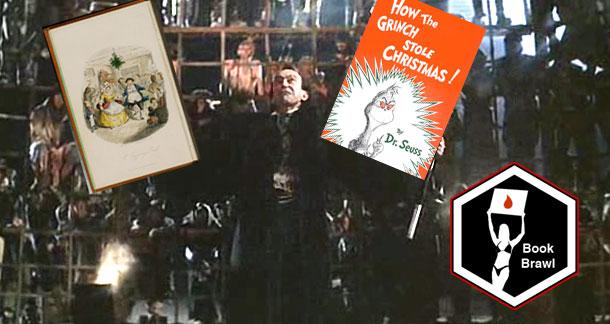 We haven’t had a good ol’ Book Brawl round these parts in quite some time, but I think the holiday spirit demands a little merry pugilist action. In the ring today, we have the two most classic tales of Yuletide: Charles Dickens’ A Christmas Carol and Dr. Seuss’ How the Grinch Stole Christmas! Who shall prevail in a display of brute strength and glad tidings? Let’s find out!

I’m sorry, Dick (mind if I call you Dick? Oh you do? How about Chuck then?), but A Christmas Carol is a rather dry name for your thrilling novella. I mean, this book has ghosts! Miracles! Lost love, time travel, redemption! It’s juicy stuff, and I wish you’d bestowed on it a title that reflects that.

Let Dr. Seuss show you how it’s done. (He is a doctor, after all.) How the Grinch Stole Christmas! is a captivating and mysterious title. Who is this Grinch? Why did he steal our most cherished holiday? And most importantly, how? Big questions, those.

Round One goes to…How the Grinch Stole Christmas!

Round Two: Groove Is In The Art 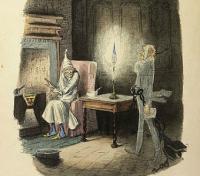 I’m definitely into John Leech’s original artwork for A Christmas Carol, with its sketchy details and gothic lines. It’s the perfect combination of cute and creepy, and it serves the narrative quite well. 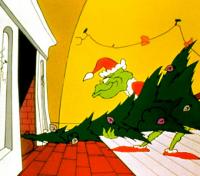 The art for How the Grinch Stole Christmas! is perhaps a bit less subtle, but I love it for that. Dr. Seuss’s illustrations are some of the most iconic and indelible images from our childhoods, and they therefore triumph over Leech’s more subdued creations.

The premise of A Christmas Carol is thus: rich, crotchety old Ebenezer Scrooge glares at everyone on Christmas Eve, including his poor, put-upon assistant, the kind Bob Cratchit. That evening he’s visited by the ghost of his old business partner, Jacob Marley, who precedes three other ghostly visits: the ghosts of Christmas past, present and future. He’s reminded of what a gentle soul he once was and how he screwed it all up, he sees and sympathizes with the plight of his family, employees and nearby poors, and he realizes how tragically his life will end if he doesn’t change. So he does! On a dime! And his story has a very happy ending, with a fat Christmas goose and lots of love.

How the Grinch Stole Christmas! follows a similar arc for a bah humbugging old grouch. The Grinch hates Christmas, mostly because his heart’s too small. He hates the noise and the singing, so he dresses up as Santa and sneaks into every Who’s home to steal their gifts. Yet the next morning, when the Whos sing and make merry even though they don’t have any presents, The Grinch’s heart grows three sizes and he carves the Christmas roast beast himself that day! Still, Dickens came up with the idea first, and there aren’t any cool ghosts with chains in The Grinch, so…

Round Four: The Petulant Protagonist

Both A Christmas Carol and How the Grinch Stole Christmas! offer an interesting take on the hero/villain dynamic, in which the villain is the protagonist. Ebenezer Scrooge rails at poverty-stricken children, forces his long-suffering employee to work late on Christmas Eve, breaks the heart of the beautiful young woman who loved him, and is single-handedly responsible for the continuing illness of Tiny Tim, due to his unwillingness to pay Bob Cratchit a reasonable wage. Yet when he learns his lesson, he learns it big time, becoming merry, generous and loving overnight.

The Grinch is a pretty big jerk, for sure. I mean, he steals presents and Christmas trees on Christmas Eve! Not to mention the fact that he’s a terribly demanding dog-owner. He also comes to his senses in a rewarding way, participating during the Who’s Christmas feast, but his plight is neither so compelling nor his redemption so gratifying as Mr. Scrooge’s.

Round Five: What A Lovely Language

Dickens may be known for his beautifully precise characterizations and impassioned defense of the poor, but his language is what I’ve always loved best about him. This passage never ceases to give me chills:

‘Oh! captive, bound, and double-ironed,’ cried the phantom, ‘not to know, that ages of incessant labour by immortal creatures, for this earth must pass into eternity before the good of which it is susceptible is all developed. Not to know that any Christian spirit working kindly in its little sphere, whatever it may be, will find its mortal life too short for its vast means of usefulness. Not to know that no space of regret can make amends for one life's opportunities misused! Yet such was I! Oh! such was I!’

‘But you were always a good man of business, Jacob,’ faultered Scrooge, who now began to apply this to himself.

I have no complaints with Seuss’ love of language. The man was a joyous wordsmith who delighted in the uncommon twisting of syllables and manic alliteration.

And the Grinch, with his grinch-feet ice-cold in the snow,
Stood puzzling and puzzling: ‘How could it be so?
It came without ribbons! It came without tags!
‘It came without packages, boxes or bags!’
And he puzzled three hours, `till his puzzler was sore.
Then the Grinch thought of something he hadn't before!
‘Maybe Christmas,’ he thought, ‘doesn't come from a store.
Maybe Christmas...perhaps...means a little bit more!’

And what happened then...?
Well...in Who-ville they say
That the Grinch's small heart
Grew three sizes that day!
And the minute his heart didn't feel quite so tight,
He whizzed with his load through the bright morning light
And he brought back the toys! And the food for the feast!
And he...

...HE HIMSELF...!
The Grinch carved the roast beast!

Much as I love that passage, and giggle every time I read “till his puzzler was sore,” it doesn’t quite induce chills the way “Mankind was my business” does.

Round Six: The Lesson Imparted

Both stories have given us a word for those who hate Christmas. Don’t be a Scrooge. Don’t be a Grinch. Don’t mistreat the poor and don’t steal presents. Worthy lessons, both, and far be it from me to rate either over the other. The commendable moral here: don’t be a Scrooge OR a Grinch. They both suck.

Round Seven: The Cultural Impact

A Christmas Carol has been adapted into countless theatrical productions, films, television and radio series, operas, graphic novels and parodies. It’s also inspired such reputable stories and films as It’s A Wonderful Life, Scrooged and How the Grinch Stole Christmas! itself. The book established the phrase “bah humbug” and popularized the now ubiquitous exclamation of “Merry Christmas!” Furthermore, the story paved the way for pirating laws and is credited with reinstating a sense of frivolity and cheer to the holiday in both America and Britain. Those are some heady claims.

While How the Grinch Stole Christmas! is also a respected and pervasive standard every Yuletide, with adaptations in the form of an animated special, musical recording, plays and films, Dr. Seuss didn’t actually invent modern Christmas the way ol’ Chuck did, doctor or no.

And the winner of our Holiday Book Brawl is…A Christmas Carol! The crowd goes wild! It’s hard to achieve victory over a book that actually created Christmas as we know it, but The Grinch put up a solid fight.

What do you think, bloodthirsty readers? Was this a fair bout?

Book vs. Film: 'A Christmas Carol' vs. 'Scrooged'

Great brawl!  I wonder who would win a fight between Tiny Tim and Cindy Lou Who?

Meredith from Houston, Texas is reading His Dark Materials by Philip Pullman December 21, 2012 - 9:49am

That is such a good question! I'm so mad at myself that I didn't include a round devoted to that. I have a sneaking suspicion lil Cindy would emerge victorious.

Joshua Chaplinsky from New York is reading a lot more during the quarantine December 21, 2012 - 9:57am

Yeah, the smart money is on Cindy Lou.  And for good reason, she's courageous and healthy.  However, if Tiny Tim were permitted to use his crutch as a weapon I'd say that would even the odds.

Meredith from Houston, Texas is reading His Dark Materials by Philip Pullman December 21, 2012 - 11:53am

Cindy has that giant Christmas tree ornament, however. It's a tough call.

I really enjoyed this battle. Two holiday favorites so beloved it's hard to argue with either one's being the victor. I'd say Meredith made the right choice, but she's right: solid fight.

Great battle. I only have one question: what's up with that cover of A Christmas Carol in the Amazon link?