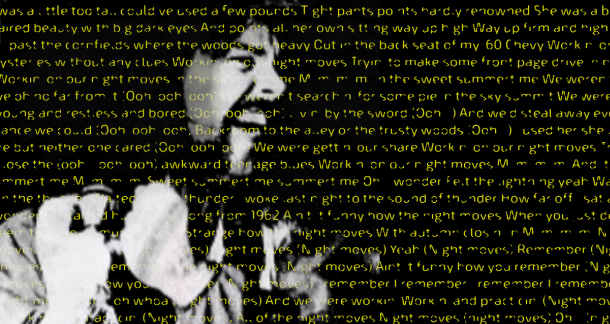 What you don’t know is that it’s a great writing lesson that even YOU can understand, you dopey bastard. Allow me to explain.

“Night Moves” starts out as an average classic rock song. Describe some Midwest-y characters, a little bit about the decade, that sort of thing. It was the song that moved Bob Seger from “local boy done good” to international rock star.

It’s all pretty standard on the surface. You might've heard it a dozen times and have no idea what's really going on underneath the hood.

“Night moves” is a ridiculous term for making out in the back of a car. An overly-serious term that a young man might use to describe his sexual prowess, right? The kind of young guy who has really thought about nicknames for his penis.

Sidebar: Most women I know have named their cars. Is this a male/female split? Guys name their junk, women name their vehicles? Also, sidebar is a pretty good penis name.

“Night moves” is a very burnt term. Meaning: it’s a term spoken with a burnt tongue. Meaning, it’s the kind of phrase that you notice, that sort of thing that makes someone’s speech special.

Being “burnt” means the term “night moves” brings two big things to the table: One, it has some life to it. You remember it. And two, it tells you a little about the storyteller. And only a ridiculous kid would use a term like “night moves.” Someone in that awkward stage where your loves are so intense that you get a little lost in thinking about them. But see, Seger doesn't have to explain all that shit. He just uses a term that explains it for him.

The term “night moves” is repeated in the song enough times to get you used to it. A minute in, between the musical qualities and the repetition in the song, you’re settled into the words and their meaning. “Night moves” starts to become furniture, something that can be in the room without you really noticing.

Then the song changes. Most of the music drops out. The pace slows. It’s just Seger singing with a couple small musical elements at key points. It turns from a loud song to a quiet one. And this is where we get the twist:

We got used to "night moves" meaning one thing, basically a noun about making out, and then it becomes a verb phrase about getting old. The transition from youthful love to loneliness, it’s utterly heartbreaking.

You've got a much better chance with Seger than you do with Hemingway.

Turning something silly into something serious can really punch up the impact. If the listener is thinking, “This is kind of goofy,” then they’re totally open to the gut punch that comes after. Think about that contrast in your work. That high/low, silly/serious shift can buy you a lot. A shift from serious to...a different kind of serious might not be as effective.

The twist with “Night Moves” demonstrates repetition with escalation. If you want to write a repetitive phrase or chorus into your work, you should think about how it can ratchet up the tension as it’s used throughout. Simply repeating the same phrase means it becomes furniture, right? But just when it becomes normal, you ratchet it up just a tiny bit, and now it’s something different. Something filled with meaning.

Most songs have a chorus, and that chorus means the same thing. A repeated message the band bangs into your head. But Seger found a way to escalate the tension.

Keep It The Same

“Night Moves” follows the rule of keeping the repeated thing (object, phrase, etc.) the same. The words are the same. Seger doesn’t flip the words or do something clever like that. The meaning changes, but the words themselves stay the same. This is really important. If you’re using repetition, say an object that shows up over and over, it’s important that the object stay the same. If it changes, it’s not really repetition, and instead of having momentum, instead of building up meaning, it starts from scratch every time your reader sees it. Don’t change it, change what it means or change what it signifies.

The song and the words are easy to understand, which lets the listener see immediately what’s happening in the song. Which means the listener is along for the ride rather than puzzling around with what’s going on. If the listener is trying to figure out what’s going on, they’re not listening anymore. Seger is saying something very simple, and he’s using simple words and phrases to do it. He’s not trying to dazzle you with big words or high-concept ideas. He’s talking to you like a real person.

You're writing a book. Or a story. Either way, you've got a couple thousand words where Bob Seger had about five minutes. If he can squeeze this into five minutes, you can damn well do it in an entire book.

YouTube comments are poison. BUT, if you read comments on Bob Seger songs, there are tons about people remembering their fathers singing Seger's songs. Crying in the car.

Maybe he's not your favorite musician, but before you dismiss Seger, remember that he connected to the hardass dads of the 70's. These were not dudes you often caught with a tear in their eyes.

I'm not saying that you will write something that connects if you pay attention to Seger. But I'm saying you've got a much better chance with Seger than you do with Hemingway.