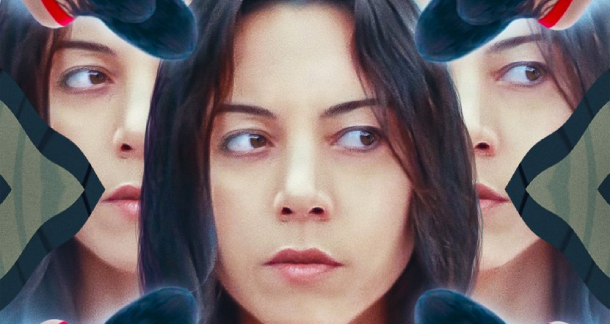 Her character is named Allison.

Allison makes movies.
She's headed to upstate New York to write.
She may be difficult to work with.
She may be married.
She's confident and sexy.
She has swagger.
She definitely lies a lot.

A couple named Gabe and Blair (played by Christopher Abbott and Sarah Gadon respectively) own the house the dock is attached to.
They are about to have a baby.
He's a sort of former musician (though as he says, "you don't stop being a musician").
She was once a dancer.
They drink and fight over gender roles and whether he's attracted to Allison.

There may be sex and violence.

There may also be a bear. At least the threat of one.

It's all super uncomfortable to watch and things end badly.

That's Part One - The Bear in the Road.

We are viewing the ongoing process of writing a narrative that may be lies, may be truths, may be violent, or sexy, or angry, or funny—but at all times comes back to the author’s singular vision.

She's still named Allison and is the lead in a movie being filmed by her husband who is Gabe.
Gabe is egging her on to be better, show more emotion, dig, something.
He's fucking horrible.
She has no confidence or swagger.
She's a mess.
Her co-star is played by Blair.
Blair is light on her feet, ethereal and eager to please.
Gabe and Blair pretend to be in love to get more from Allison (though given the way Blair looks at Gabe, one of them may not be pretending very much at all).
Allison drinks too much.

While Part One is always on edge, the music ominous, and you feel bad for Blair at all times, Part Two is more slapstick, the music bouncy and punchy. The movie shifts from a three-hander to a more expansive cast. A film crew is now present. They're always in motion, high and sick, spilling coffee and looking to get laid. And now you feel bad for Allison as they try to shoot the final emotional scene of the movie within a movie they’re trying to finish.

The effort and emotions required to shoot that scene spill out across the remainder of the movie.

There may be sex and violence.

There may also be a bear. At least the threat of one*.

*(One should note, that Allison endearingly refers to Gabe as Bear during her final tumultuous post shoot breakdown.)

It's all super uncomfortable to watch and things end badly.

That's Part Two - The Bear by The Boathouse.

Scene: Aubrey Plaza is in a red piece bathing suit sitting on a dock somewhere in upstate New York.

She walks into the house and starts to write. A scene that we also see in Part One.

And then we're done.

I can definitely tell you what I saw as I watched Black Bear.

Which I have and this is a review and I owe you that.

Full-disclosure though, I don't know if I can make sense of it for you.

Which may mean something to you, or the writer/director of Black Bear, or even me. What's my responsibility here?

I don't know, but I also don't know how to answer this question in the same way I can't explain someone else's creative process to you.

Who can do that?

That said, I can definitely say a lot about the creative process and what Black Bear has to say about all of that.

At one point in Part One, Allison says, "It's not like I have any big ideas." She also says, "With my scripts, I start with a simple premise."

Which may be all we need to know about what Black Bear wants us to know.

As artists we have a simple idea, a premise, something that may come from life, ours or someone else's. We ruminate on that idea, we see where it might go, we craft a story, adding layers and details, dialogue, and conflict. We look to ground our characters in something real, backstory, actual lives lived. We strain for emotional impact and authenticity, and we keep telling ourselves that story from every possible side, approaching it one way, then another. We shave down rough edges, add others, maybe a hook. We build-in callbacks to the story itself and we keep molding it, adding more layers, pain, humor, history, tightening it until it looks like a story we want to tell. In our voice. Personal and alive. 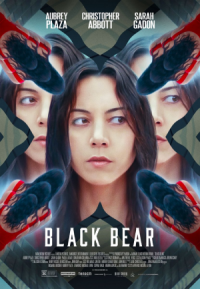 Which is another thing, Black Bear is always alive.

The performances are all terrific, though Aubrey Plaza is the center of all the kinetic energy present—good, bad and otherwise. She is a live wire and terrifying in her ability to suck everything happening around her into her performance. Consuming it and making the story her own at every turn.

Which is a further thing.

Allison is always engaged in the act of creation. Part One is one version of the story. Part Two another. We are viewing the ongoing process of writing a narrative that may be lies, may be truths, may be violent, or sexy, or angry, or funny—but at all times comes back to the author’s singular vision.

We are asked to believe that the creative process is boring, solitary and insular. But that's the actual making of something. What goes on in the author’s head is anything but any of that, though. Instead it's everything we’re thinking and experiencing all at once, chaos and cacophony, waiting to be captured and crafted into something we love and the public will want to consume.

And you will consume Black Bear.

5 Storytelling Lessons You Can Learn From the Films of 2013