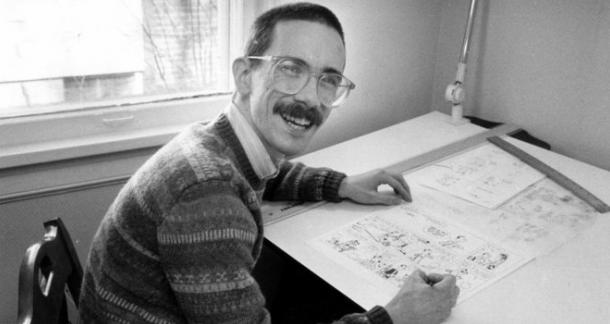 My dad and I have what you might call a “cordial” relationship now that I’m (ostensibly) grown and out of the house. Superficially, we don’t have a lot in common, which means much of our day to day (or month to month, as is often the case) conversation is relegated to political arguments—something I attempted to put to bed on my last visit home—and discussions of culture. As far as shared experiences go, however, these days, they’re mostly limited to family gatherings and the occasional movie screenings I force on him.

Which makes me all the more grateful for Bill Watterson, and his incredible achievement, Calvin & Hobbes.

I wanted to start this column with something along the lines of “Calvin & Hobbes is of course a comic strip that needs no introduction,” but I’m not necessarily convinced that’s true anymore. In this brave new world that has a billion apps for consuming comics via iPad and in which iconic strips like Blondie, Garfield, and Family Circus have been cranked out for decades, Watterson’s masterpiece, which ran a comparably scant ten years, seems less likely to endure in the popular consciousness. I hope that I’m wrong, because Calvin & Hobbes is a work of art that taught me not just a lot about stories, characters, and humor, but about the importance of values and beauty.

I think that’s what my dad reacted to when I was a little kid, and what cemented the nighttime ritual of Calvin & Hobbes readings in place of the traditional bedtime stories. As a painter and an architect (note: before you ask, yes I feel like a woeful underachiever when placed next to my dad), I suspect he responded to Watterson’s steadfast observation of his own artistic and ethical codes, something that wasn’t really made public until the strip ended in 1995.

Calvin & Hobbes is a work of art that taught me not just a lot about stories, characters, and humor, but about the importance of values and beauty.

We’re getting ahead of ourselves, so let’s regroup, and get back to that introduction. Calvin & Hobbes is about a mischievous six-year-old named Calvin, his stuffed tiger, Hobbes, and their various cartoonish mishaps (the fact that the two leads are named after a theologian and a philospher should point to this not being an normal comic strip). In the early days the strip was more or less confined to the usual three or four panel, episodic stories that ruled the world of newspaper comics, but Watterson found room to flex his artistic chops on Sundays, creating more intricate backdrops, both visual and narrative, with the extra allotted space. Over time, Watterson’s evolving style and refusal to back down from his career-long battle with his publisher would take the strip into groundbreaking visual territory, throwing off what the cartoonist once referred to as “the tyranny of panels” in favor of free-flowing, borderless, juxtaposed images and incredibly detailed artwork. Collected editions of the strips went one step further to include beautiful, large-format watercolors, often accompanied by original poetry.

As Calvin & Hobbes evolved, Watterson’s storylines became more complex and serial, and his humor became more dynamic as a result. Secondary characters like Susie Derkins (Calvin’s next-door neighbor/arch-nemesis), Spaceman Spiff (one of Calvin’s many alter egos) and Calvin’s parents all got a much bigger share of the limelight. While much of the strip’s world continued to focus on problems more organically associated with childhood (Calvin’s constant failures at school, Hobbes disappearing following a burglary), Watterson also began to use the characters as mouthpieces for his own viewpoints on merchandising, art and art criticism, and popular culture. His wit is blisteringly dry and needle-sharp, often deployed against persons in society he perceives as unadventurous pearl-clutchers, as well as uncultured louts. Television is so viciously mocked and caricatured, it makes one wonder what Watterson might have to say about the Internet and social media, and other curiosities of modern society.

As alluded to earlier, the artist’s primary struggle during the run of Calvin & Hobbes was merchandising, a practice Watterson abhorred on principle, and one that he nearly quit the strip over, despite being in no legal position to retain control over the work or even prevent his publisher from hiring a replacement artist/writer. In a recent interview with Mental Floss, Watterson described the predicament he was in:

I was truly scared I was going to lose everything I cared about either way. I made a lot of impassioned arguments for why a work of art should reflect the ideas and beliefs of its creator, but the simple fact was that my contract made that issue irrelevant. It was a grim, sad time. Desperation makes a person do crazy things.

Of course, these sentiments were never flatly explained until the publication of The Calvin & Hobbes 10th Anniversary Book in 1995. A valuable entry for anybody looking for the inside scoop from Watterson himself on the various controversies and the development of the strip, it contains detailed character summaries, discussion of influences, and evolution of techniques. As a small child, I couldn’t pick up on any of these sentiments, nor grasp what exactly Watterson was saying through some of his more complicated strips even if I tried, but I suspect my dad respected Watterson not only for his artistic skills but his firm commitment to the values of self-reliance and development, hard work, and personal ethics, common bonds that were probably strengthened by their shared Midwestern heritage (my dad grew up in Missouri, Watterson in Ohio). These same qualities of the work came to me in a revelatory fashion as I grew older and re-read the tattered copies in my childhood bedroom during visits home.

Calvin & Hobbes is available in several collections and treasuries, the first run of which were titled The Essential, Authoritative, and Indispensable Calvin & Hobbes. As Watterson would later remark, he chose these titles because, in his mind, the publications were obviously completely unnecessary (with most of the content having already been published in earlier, smaller collections). Each volume contains beautiful original artwork and enough heartwarming and hilarious goodness to kill an entire afternoon. Any of these are a great way to get started, but the real prize for a true and seasoned fan (Christmas is coming up…just saying) is The Complete Calvin & Hobbes, a collection of beautifully bound hardback volumes published in 2005. As advertised, the collection features every strip ever published, and a new introduction by Watterson himself.

I wouldn’t describe myself as an overly sentimental person. My very first column for LitReactor was a diatribe against people who were out to character-assassinate eReaders, after all, but as a premature grump who yearns for “the good old days” of fifteen years ago, I’d urge anybody who appreciates humor, art, and beauty to seek out Calvin & Hobbes, and to read these books not on the many digital options available these days, but the way a traditionalist like Watterson would want them to be read. And of course, I have to stress that if you have children, these books are a great way to bond and teach about the value of individuality, imagination, and appreciation.

beautiful piece - thanks for the reminder. I think I'll get the complete collection for my dad.