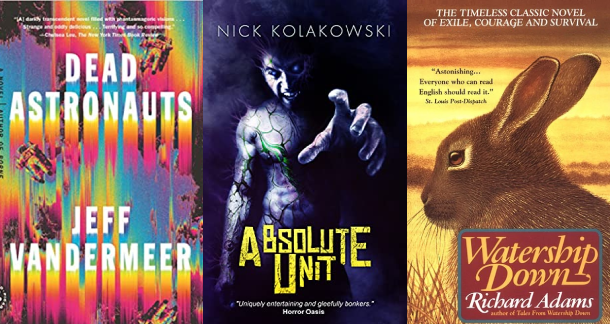 A couple years ago, I had the idea to write a novel from the perspective of a sentient, sarcastic parasite living in the gut of a corrupt public health inspector. I figured a non-human narrator would have some interesting things to say about humanity. The final product, Absolute Unit, is a combination of body horror and crime fiction; the parasite gets tired of living on scraps and decides to use its budding telekinetic powers to conquer the world.

While I was working on Absolute Unit, I watched a lot of parasite-themed horror movies (The Thing, obviously, but also a lot of stuff by David Cronenberg and James Gunn) and read a lot of books told from the perspective of insects, rabbits, robots, and more. I discovered a few things that might aid your own process if you decide to embrace a non-human narrator (especially in an apocalyptic setting). Here are the books whose ideas and lessons stuck with me.

Jeff Vandermeer has made a career out of shifting narrative perspective away from the human. While some critics have deemed him an “apocalyptic” writer, it might be fairer to say he’s more hopeful than that—his works often focus on that point when humanity will inevitably transition to whatever’s next.

I read Vandermeer’s Dead Astronauts—which features human, post-human, and non-human characters within the shadow of a ruinous city—during the first days of the COVID-19 pandemic, as I was beginning to refine the messy first draft of Absolute Unit. There are a lot of great passages (the prose breaks into something close to poetry at many moments), but there’s one that struck me with an electric jolt when I first read it:

These versions they turned their backs on slowly, after days in their contamination suits, careful not to breathe the air. You could regroup in such a place, but you would find no sanctuary, nor an adversary. You could be lulled, or culled, and a lull was like death in the end. Woken from a dream of blossoms into a swaying disintegration… For that was what bodies wanted: To come to rest. To know no more.

Outside, the ambulances shrieked down empty streets and through the walls I could hear my neighbor coughing, coughing, coughing, coughing. That April, we all seemed to verge on disintegration; the idea of coming to rest, to silence, had a bleak appeal. At the time, I was debating how exactly to end Absolute Unit. I have to admit I’m a sucker for a happy ending, but I also realized that averting the apocalypse had been done far too many times. You expect humanity to survive on the last page, because humanity deserves it, right?

I asked myself: Why not push beyond humanity? After all, Vandermeer did it. He made it work. If you opt to not save the world (or at least your story’s version of it), you might end up with something even more interesting.

Get Dead Astronauts at Bookshop or Amazon 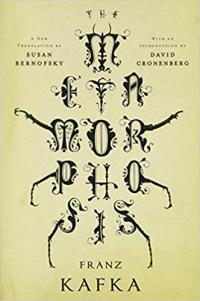 "The Metamorphosis" by Franz Kafka

The Metamorphosis is an essential work if you’re trying to write something that takes the perspective of a non-human (or a former human, in this case) into account. Kafka’s incredible trick is eliciting sympathy for a man-sized bug.

Plus, this opening sentence: “One morning, when Gregor Samsa woke from troubled dreams, he found himself transformed in his bed into a horrible vermin.” How can you beat that? If you’re writing something from the perspective of a non-human, revisit Kafka to see how his vivid descriptions of emotions and fears make you feel intense pity for something that appears revolting on the surface. He’s not afraid to dig in. Speaking of fear…

Get The Metamorphosis at Bookshop or Amazon

"Watership Down" by Richard Adams

Part of me wanted to revisit this iconic book. Part of me was still traumatized from when I read it as a kid. Bunnies are cute, and we hurt when they hurt. Once I re-read it (after steeling myself sufficiently), I took away a good lesson: with books told from a non-human perspective, anthropomorphizing your non-human narrator as much as possible is key—that’s how the audience connects. That’s how you make them laugh, and cry, and care. This is wisdom you can also take from Kafka and his big bug, but with Watership Down, Adams showed how to do it at book length.

Get Watership Down at Bookshop or Amazon

""The Things"" by Peter Watts

The Things is an adaptation of John Carpenter’s iconic film The Thing (itself an adaptation of John W. Campbell’s famous short story “Who Goes There?”), told from the perspective of the alien as opposed to a bunch of Antarctic researchers. The story’s narration is weird and terrifying (“I shared my flesh with thinking cancer,” is how the alien summarizes taking over a human host). It’s the opposite of Kafka or Adams—a perspective that you grow to understand, but instead of feeling empathy for it, you experience a rising fear. It’s essential reading for anyone writing horror.

Read "The Things" at Clarkesworld

It might sound like a bit of cliché, but the key to crafting the ideal non-human protagonist is to embrace whatever humanity (good or bad) you can find at their core. Otherwise, the result is possibly too alien for your reader to identify with—especially if your protagonist is trying to conquer the world.

Get Absolute Unit at Amazon

Vandeemeer is a great writer, I have recently collected his novel 'dead astronaut' which is different from his other writings. Many young writers have been following his way of writing style about a specific subject to write. Being a content write this https://ulive.chat/fr/p site, I always try to provide valuable helps for the readers. I have gotten many useful points from your writings. Thanks for sharing this post with us.

Death astronaut is a great novel  and new writers could learn a lot  for writing better. I have been working as a senior advisor and help people with casadoscontos eróticos for having a wonderful moment. Thanks for letting us know about this novel and the way of writing.

Thank you for talking about that. I remember the first time when I read Franz Kafka's story "Metamorphosis", then for the first few days I walked as if enchanted and constantly thought about the story that was depicted there. Most of all, I was probably struck by the speed of the changes that took place with the main character and the hopelessness of this situation. It seems to me that such literature is absolutely necessary for us so that we gain more knowledge and understand that it is possible to find a way out of almost any situation that has occurred. So I love this novel.