Bearskin: A Fast Read 20 Years in the Making 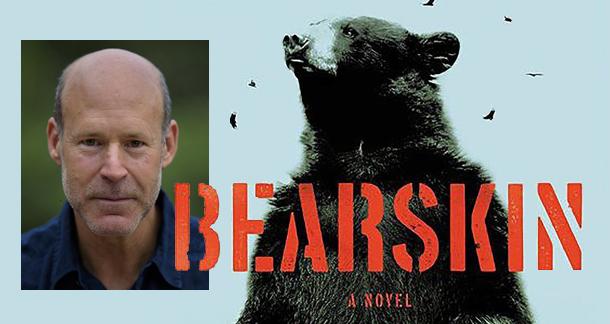 When I was twenty-eight years old, I quit a perfectly good job as an associate at a law firm to "become a writer.” Kind of early for a mid-life crisis, but a writer is what I’d always wanted to be, and life was passing by so quickly. I was nearly thirty years old, for god’s sake. I drove around out west for a couple of months, then returned to Virginia, took a part-time legal job, and started applying to graduate writing programs.

A year or so later, I was about to start at the University of Virginia, scratching around for something to write about for the first workshop, when my cousin told me about a hitchhiker he’d picked up on a back road in the mountains of western Virginia. Apparently the guy made his living gathering things like ginseng and whatever mushrooms were in season, so he spent a lot of time walking around in the backcountry, and he told my cousin he’d been finding bear carcasses left out in the woods. The carcasses had been mutilated, their paws cut off and the gallbladders removed.

I’d never heard of this sort of poaching. When I looked into it, I found the mushroom picker had stumbled on the local fringe of a global phenomenon: bears all over the world were being killed and their gallbladders and paws sold on the black market, mostly exported to southern and eastern Asia for use in traditional medicine and cuisine. I learned bear paws are a delicacy in certain cultures, a prized and prestigious dish—the front paws are supposedly more tender than the back paws, but all four get eaten. The other thing people are after is the bile in the bears’ gallbladders, which has been used for a couple thousand years to treat various disorders.

There may not have been a quicker way to do it, exactly, but I do hope the next book’s gestation period will be a bit shorter.

By the mid-nineties, Asian bear species had become extremely rare, and around that time, somebody noticed there are a lot of bears in the United States—hundreds of thousands of them—all with perfectly good paws and gallbladders. So what the mushroom picker was seeing in the mountains—all those mutilated bear carcasses—was the result of a sudden spike in demand: black marketeers were paying poachers a few hundred bucks for a set of paws and a gallbladder, which they would then export to Asia and make a ten-fold or better profit. Given those margins, it was hardly surprising that various organized crime organizations had moved into the bear parts market.

All of which struck me as a rich backdrop for fiction. I started wondering what you would do if you found bear carcasses on your property, and what might happen if you encountered these profit-motivated poachers. That turned into the opening scene of a story for my first workshop at UVA, which I kept extending in subsequent workshops until it had to be a novel. I finished Bearskin 1.0 for my MFA thesis, but it was kind of an obvious first novel. The main character was named Billy, and Billy was a lot like me; i.e., he was boring, and the book was not interesting to agents or editors. I suppose I was trying to write to some vague idea of a “literary” novel, where any action or thrilling elements were just a little bit tongue-in-cheek.

I set that version aside and worked on another novel; I wrote essays and stories. I worked as a lawyer part-time. My wife and I moved out west. I was able to publish a few short pieces here and there. I joined a friend who had started a small business in land conservation. I wandered around in the mountains with our dog, telling myself I was gathering wisdom and experience.

Then, about ten years ago, a friend suggested I go back to Bearskin and try again. I decided to give it a month of work, see what happened. I stripped the novel down to the only elements that were any good: the mountain, the bears, the poaching. I threw out the main characters and came up with a completely new protagonist, someone with a past, someone who could be dangerous. The shell of the original novel was like an elaborate dollhouse: all the furniture was in place, and I knew where everything was. When I dropped new characters in, they developed quickly. I finished the first few chapters and decided they could stand alone as a long story. The Missouri Review published it as a novella in 2008.

Thanks to that publication and later winning TMR’s Peden Prize, I had a handful of emails from agents and editors asking if there was a novel. Almost all of the old book was unusable because the new characters were so different, but I still had that shell, and I was curious about what would happen to Rice Moore. I decided to pick up at the end of the story and keep going, to extend the novella into a novel. Shouldn’t take long. Ha!

One complicating factor was I had to keep updating the research. A lot of time had passed, and my plot had become more complex, so I had to keep diving into entirely new rabbit holes. A backstory in southern Arizona meant I got to visit the border country. I read books about old growth forests, Mexican cartels, snipers, gunfighting. I found a few experts on things like herpetology and federal law enforcement and emailed them questions. And not having been in a fight since grade school (my record was 1-1-1), I worried about my ability to depict violence realistically. I took lessons in Muay Thai and Krav Maga, which was fun as hell but led to rotator cuff surgery.

Finally, in 2014, I sent a new draft to the folks who had contacted me after the TMR publication, but once again, nobody liked it. I revised for another year and lucked into Kirby Kim, my fantastic agent. Another year of revisions followed. Then we found the amazing Zack Wagman and Ecco/HarperCollins. Another few months of revisions and presto: a fifty-four year old’s debut novel. Twenty-plus years of writing, revising, letting it sit, then rewriting and re-revising…there may not have been a quicker way to do it, exactly, but I do hope the next book’s gestation period will be a bit shorter.

Column by James A. McLaughlin

James A. McLaughlin is a native of Virginia who lives with his wife and large dogs in a canyon east of Salt Lake City, Utah. He holds law and MFA degrees from the University of Virginia. His essays and fiction have appeared in The Missouri Review, River Teeth, and elsewhere. His novel Bearskin is available from Ecco/HarperCollins. He’s currently working on two novels related to Bearskin and set in Virginia and the American Southwest. James is an amateur photographer whose interests include wildlife, landscape, and human ecology. His photographs have appeared in numerous publications including Virginia Wildlife, the Richmond Times-Dispatch, and The Missouri Review. His writing and photography can be found on the internet at jamesamclaughlin.com and on Instagram @jamesamcl37.

I'm gonna keep my eyes peeled for this one, want to read it!