Be Smarter Than a Toddler: 5 Ways To Avoid Reading Books to Your Kids 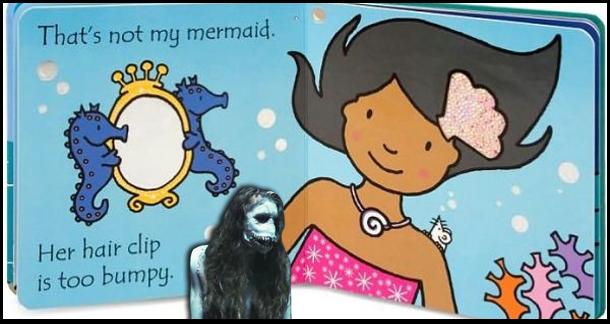 Every parent of young children knows the experience. Your kid has started to read and you’re so proud, but they’ve also latched on to a few certain books. This could last for days or weeks or even months, and as a 33-year-old individual there’s only so much you can take—reading it to them every night, every day, sometimes all day. You’re the adult, you’re responsible for this little creature’s upbringing, so you know you’re doing the right thing. But inside your head you’re screaming and dying a little.

In the last six months this has happened with my two-year-old daughter and with one book in particular. It’s called That’s Not My Mermaid. Written and illustrated by Fiona Watt and released in 2005, it’s a board book for very young children, part of their popular Touchy-Feely series created by Watt. If you’re not familiar with board books, they have the pages pasted to heavy cardboard, making them easy to grip and harder to destroy.

That’s Not My Mermaid is one of many, many Usborne Books with the premise of “that’s not my…”, with each page showing different kinds of creatures from the title, in this case mermaids. Each page has different patches of texture on the mermaid designed to develop sensory awareness and language awareness in toddlers. The idea is that the kids touch each page to study the mermaids until they get to the last page that is, in fact, their mermaid, with a mirror for the child to look in.

It’s your sanity at stake here, folks. You can’t look at those cherubic mermaid faces one more time. You know every page by heart and it’s murdering your soul.

In the Bishop household there’s also That’s Not My Snowman, That’s Not My Reindeer and That’s Not My Monkey. They're pretty big with the kid. The mermaid book, however, is at the apex of a perfect storm in the development of my child.

See, she also loves The Little Mermaid because her mom and aunt love the movie too, and introduced it to her very early on. “Part of Your World” is the song my wife sings to our eldest daughter every night, and we also got her an Ariel doll that sings and can go underwater. The result is my daughter insists that while in the bath she’s a mermaid, and splashes around like a mad woman.

It was all very cute…at first. Compounded with the fact that she also watches the TV show Sofia the First and one of the titular character’s magical abilities is to transform into a mermaid, it was the culmination of several events.

Now I know what you’re thinking: this guy lets his daughter watch way too much TV, and that TV needs to consist of much more than Disney. But don’t be so quick to judge, my friend. Before kids you have high standards about “screen time,” but just wait until the infant is screaming and the toddler is repeating “Ariel Ariel Ariel Ariel Ariel Ariel Ariel Ariel” 50 times in a row. You’ll break. They all break.

So the insult to injury is this mermaid book that she wants to read every night after six months of it. And I have a few suggestions for you if you find yourself in a similar situation on how to outsmart the two-year-old.

This one is almost guaranteed to fail. First of all, there’s the aforementioned fact that kids have more willpower than you, and will never give up when it comes to insisting on getting their way. See the chant of “Ariel” up above. If you hide a book that your kid wants, they won’t catch on that you hid it from them. They won’t suspect that foul play is afoot. But they will incessantly seek out that book until the end of time, and they’ll bring you along with them.

That’s when you realize you’re faking ignorance as to the location of the book that you hid. But you’re also helping your toddler look for said book. It all comes crashing down that this is what you’ve been reduced to. But even though, as already stated, they don’t realize you’ve pulled a fast one on them, you still feel compelled to come up with an elaborate way to act like you found the book. As if they would know any better.

2. Turn them on to Other Books

This is probably the best alternative. I have many ambitions for introducing my two daughters to my interests somewhere down the line. For instance, I have the entirety of the amazing graphic novels series Bone by Jeff Smith, all nine volumes lined up on my toddler’s book shelf. But at least for the moment it’s hard to sway her in a direction away from her natural inclinations. If you say, hey honey, why don’t we read this tonight, she’ll throw up her hands and say no no no no no , mermies (her word for mermaids).

But luckily there are natural occurrences of life that may push them in a certain direction. For example, last year my wife was pregnant with our second child, who is now a three-month-old infant. Our toddler, as far as I could tell, seemed to grasp the concept of another baby on the way but probably didn’t feel its full weight. This came with a whole new set of emotions, namely jealousy and resentment. So we brought in a few new books.

The New Baby, written by Anne Civardi, illustrated by Stephen Cartwright and also from Usborne books (my wife has a friend that sells them), tells the story of the Bunn family. They are a traditionally nuclear family, with a little girl and boy, welcoming a new baby to the world. The grandparents come over to watch the children while the mom and dad go to the hospital, then they return with a baby girl. The rest of the book follows the transition of having the baby around, with bathing her and in a nicely progressive image the mother breastfeeding.

And for whatever reason this book really connected with my daughter. Perhaps it was because the family in the book very much resembled our own. Perhaps it’s because she was clinging to a way to understand the changes in her world. But it worked as an educational tool and as an emotional salve. At least for a while.

Because eventually she went back to mermaids.

3. Spice Up Your Reading Performance

This really should be a prerequisite for all readings of books. There’s a certain rhythm built in to most children’s books anyway. They are either designed to rhyme like Dr. Seuss, or have a certain sense of setup and payoff from page to page. These things are only about a dozen pages long most of the time anyway.

So this book in particular has about a dozen mermaids, each with distinctive fashions and skin colors and settings. So mix things up a bit. Imagine that one of them is Irish and one of them is Jamaican. Go for a pirate voice and really bellow out those highs and whispers those lows.

The kid can sense blood in the water. They don’t want you phoning it in. And the more you enjoy it, the more they enjoy it.

This one may not score you points in the marriage or relationship department, but there’s always steering the kid toward the other parent. There’s no feeling in the world better than the love and admiration of your child…but it is nice to have some peace and quiet to yourself for a brief respite. So plant the seed in their head that your significant other, their other parent whether it be mommy or another mommy or another daddy, is the one that reads the book the best.

They do the best voices, they do the best faces and they have the best lap for sitting in. It’s dirty pool, and of course you’re sympathetic to the inner battle the other parent is going through in relation to the kids. If the mom is breastfeeding, for instance, she may be not just emotionally but physically exhausted on an actual caloric level.

But it’s your sanity at stake here, folks. You can’t look at those cherubic mermaid faces one more time. You know every page by heart and it’s murdering your soul.

5. Accept and Embrace Your Cruel Fate

You’ve lost and now you’re resigned to your fate. You’ll be reading this book to your kid five times a day for the rest of your days. Or at least until they move on to The Very Hungry Caterpillar or something like that.

So entertain yourself. Start writing fan fiction about these mermaids in your head. Cross them over into the Marvel Universe. Ship them with one another. Or my personal favorite is imagining that they’re trapped within the pages of the book and are trying to get you to touch them in a vain attempt at escape.

Yeah, I’ve read these books one too many times.

You may think I’m horrible, and you’re probably right. But if you have kids you know that on the one hand you have these tiny bundles of joy that you would sacrifice everything, including your, life for but on the other they’re kind of little screaming sociopaths and you’re not sure if they’re trying to kill you.

6. Can you read it to me? Sit back while the toddler adorably shouts random words from the book.

7. Facilitate its destruction Kid wants to read book. Offer water in a "big girl glass". Let water spill all over book. Oh no! Book is broken! Bye-bye book! (I have only done this once. I felt a little bad, but not really.)