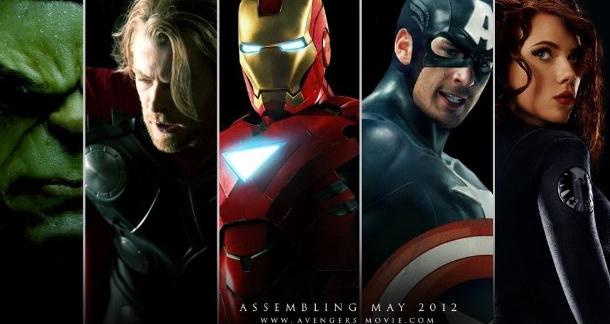 And there came a day, a day unlike any other, when Earth’s mightiest heroes found themselves united against a common threat. On that day, the Avengers were born—to fight the foes no single superhero could withstand!

The Justice League might have been first, but the Avengers has always been the cool superteam. The Justice League was a job, rules and duty. It was the army. The Avengers was more like a side gig. It was an amazing band formed when all your favorite musicians got together to jam for one crazy festival weekend. Remember the Infinity Gauntlet tour back in ’91 when the Incredible Hulk threw down with Thanos the Mad Titan? Classic.

Now, led by Joss Whedon, the heroes have assembled to create the biggest, most awesome summer superhero blockbuster ever. While it remains to be seen how successful the Avengers’ Hollywood Adventure will be, it will undoubtedly cause a much-deserved spike in book sales. Their revolving-door membership policy has kept them consistently relevant and interesting throughout their publication history. It also makes the books incredibly easy to pick up for the newcomer—the team changes so often that there is no shortage of starting points. If you want to know more about them before you see the movie, or just want to read some great Avengers books you might have missed, I have compiled a summer reading list.

Of course, if you really want to begin at the very beginning you can pick up The Avengers, Volume One, available in a nice trade paperback collection. Witness the original assembly, when Iron Man, Ant-Man, the Wasp, and Thor united to stop a rampaging Hulk, only to discover he was being manipulated by Loki. Sound familiar? Like many volume ones, it is full of firsts—the revival of Captain America, the Avengers’ first clash with the Masters of Evil, and the debut of Kang the Conqueror, their first original villain. It’s a fun read for the collector and the completist, but it’s not absolutely necessary to understand anything that comes after it, as Marvel villains all seem to share a talent for expository monologue. For those interested in the classic Avengers, I also recommend Kree/Skrull War, Bride of Ultron, and Operation: Galactic Storm.

To continue the rock band metaphor (and why not?), the Avengers have had more than their fair share of breakups. Some were epic, like when the Scarlet Witch had a nervous breakdown and turned reality inside out. Others, like the Skrull scheme to use impostors of the founding members to disband the team only to have it re-assemble as soon as the originals heard the news, were almost mundane. The biggest, nastiest, most brutal breakup was 2006’s Civil War. Although its consequences spanned all of Marvel’s titles, the Avengers were at the very heart of the conflict. Captain America and Iron Man both had different opinions on the ethics of the Superhuman Registration Act, and that disagreement came to more than words. For the first time it wasn’t some new society of supervillains that sundered the Avengers, but a disparity of ideology. Both sides were confident they stood on the side of right, and soon Earth’s mightiest heroes were battling each other instead of the bad guys. The result was the kind of mean and dirty war only two best friends could fight—families were betrayed, lives were destroyed, allies were killed, and the survivors were forever scarred. Civil War was a potent metaphor for how an honest intellectual debate devolves into a petty personal argument, until, as Cap says, we’re not fighting for anything anymore, we’re just fighting.

Of course, just like any legendary rock band, the Avengers have had as many reunions as breakups. Eternal teenage sidekick Rick Jones, who called the first assembly, often reminds his heroes that they work better together, and sometimes the government puts together a new team of former supercriminals. Occasionally, one of the founding members decides to hit the road and get the old band back together, but the best Avengers reunions happen on a day unlike any other, against a common threat. New Avengers: Breakout starts with a jailbreak at ultramax security prison, The Raft. The only reason eighty supervillains didn’t escape that night is because a random group of nearby heroes banded together to do what had to be done. When Iron Man and Captain America announce the Avengers are back, SHIELD Director Maria Hill tries to shut them down for being too awesome, only to discover Cap has full champion license, granting him the authority to assemble any team he wants for any mission he wants because he is far more awesome than she could have imagined. Spider-Man finally joins the Avengers, making Daredevil the hero to refuse membership the most times. Brian Michael Bendis writes some incredibly natural dialogue between supernatural people, and it looks like Whedon has a similar tone for the movie.

Avengers: The Initiative introduces a whole new generation of young superheroes in training, like the waves of cover bands that any massively popular rock group leaves in its wake. Not all of them have what it actually takes to be rockstars, and the road is unforgiving. Many are damaged along the way, and some are senselessly lost, but a few find their moment and finally discover their inner hero. The Initiative uses superhero fisticuffs to dramatize the alienation of the gifted child, and it does so in a consistently compelling way, with teenage characters that are more sympathetic than insufferable. Although an “Avenger Initiative” has been mentioned in the Marvel movies, it appears to only refer to the assembly of the film’s main characters. Which is a shame, because I think that people might go to see a movie about gifted children at a secret school learning how to use their amazing powers. What do you think?

Illuminati features one of the group’s more unique assemblages. After the Kree/Skrull war, an interstellar conflict that threatened to engulf the Earth (which would continue to happen with alarming frequency), six of the superhuman community’s most prominent leaders meet to discuss how they might better anticipate and respond to such epic perils. In attendance is Iron Man, a founding member of the Avengers; Dr. Reed Richards of the Fantastic Four; Professor Charles Xavier, leader of the X-Men; Dr. Stephen Strange, Master of the Mystic Arts; Black Bolt, the Inhuman King; Prince Namor, Ruler of the Seven Seas; and the Black Panther, King of Wakanda. Iron Man theorizes that if Earth’s defenders had been united, they might have prevented the Kree/Skrull invasion from happening. After some debate, the group agrees to meet in secret to proactively prevent world-dooming dangers, except for Black Panther, who says this is a terrible idea and it will lead only to disaster. From there, it’s a fascinating read to find out how right he was. Illuminati is ultimately a tale of super hubris. Five of the most brilliant and powerful men in the world, united with the very best of intentions, strive and fail to achieve any of their noble goals, and as this secret history of the Marvel universe unravels, we learn that they often made things worse. You know what they say about the best laid plans of mutants and men.

The team’s most bizarre lineup was called the Dark Avengers. Norman Osborn, former Spider-Man foe Green Goblin, killed the Skrull queen live on national television during her empire’s most recent invasion of Earth, becoming a war hero overnight. After Tony Stark’s failure to prevent the invasion, Osborn is put in charge of reforming the Avengers. In addition to a schizophrenic Superman and the actual God of War, Osborn assembles the most dangerous thieves, murderers and psychopaths in the world, disguises them as superheroes, and turns them loose with licenses to kill. Ironically, the Dark Avengers actually saved the world more times than the Illuminati before they turned on each other. Both of these stories are about the band that falls apart due to personality conflicts. The Dark Avengers cannot work together because they are all evil and self-centered, if not completely insane. The Illuminati could not function as a team because they were all leaders, accustomed to taking charge of the situation and giving orders. A great band needs a front man and a crazy guy or two, but if you have too many of one or the other, the personality conflicts begin to eclipse the true reason for getting together: to play music. Or save the world, if you’re the Avengers.

To put the final nail in this rock band metaphor, Avengers Forever is the greatest hits album. Not one of those pitiful 12-track compilation CDs they put out in the 90s, but a fully re-mastered limited edition package brimming with extra content that adds new layers to old favorites. Kang the Conqueror is at war with Immortus, a future incarnation of himself. Drawn into the middle is unlucky superhero pal Rick Jones and a team of Avengers assembled from various periods of the team’s past and future. What ensues is a grand time-travel opera that spans the entirety of the Avengers’ saga, a temporal civil war fought behind the scenes of history. Avengers Forever is a massively detailed and beautifully illustrated love letter to Earth’s Mightiest Heroes, a perfect gift for old fans and new.

Obviously, I’m beyond excited for the movie. I think The Avengers might be the superhero movie we need. The group has always been about vastly different people finding common ground and working together. Diversity has always been the team’s greatest strength, not just in battle, but also in publishing. The ever-fluid roster means that even if you don’t like a particular team it will soon change, and there tons of lineups to choose from in the archives. It also means that Marvel could potentially keep making these movies forever. Whether that will be a good thing remains to be seen, but in any event, I’ll keep reading the comics. I tried to highlight as many different incarnations of the team as possible, but be sure to let me know which of your favorite teams I left out in the comments.

No Great Lake Avengers?  I think that should be the next movie. Mr. Immortal is such a great character.

Damn it. And I thought I was so original when I came up with a character whose power was instantaneous resurrection. Look at me makin' a fool out maself.

I am beyond pumped for the Avengers film.

Maybe one day Disney will give us an animated film about Lockjaw and the Pet Avengers. Talking superhero animals seems like it would play to their strengths.