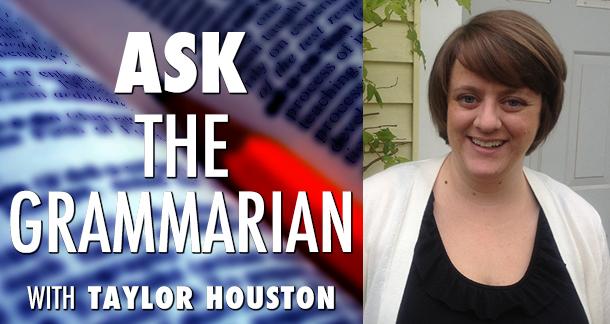 First there was Ask the Lit Coach, with Erin Reel. Then came Ask the Agent, with Bree Ogden. Now, LitReactor proudly presents: Ask the Grammarian, with the one and only, Taylor Houston. You've got questions about grammar and usage, she's got answers. Have at you!

First of all, thank you to everyone that submitted questions. Let’s get started:

When do you use a comma before "too" at the end of a sentence and when is it unnecessary?

I seem to remember having it drilled into my head in grade school English classes that when too was being used to mean also, there was ALWAYS a comma before the word if it came at the end of a sentence, and there were ALWAYS commas before and after it if it appeared in the middle of a sentence. Like so:

I, too, have taken up smoking.

I have taken up smoking, too.

Turns out, I can use commas like this, but I don’t have to. There is no rule that states I have to use commas to set off the word too when used to mean also in a sentence. Similarly, there is no rule that says I can’t either. The choice, it appears, is stylistic. If you want your sentence to read smoothly, forget the comma. For instance:

My job is so stressful that I have been drinking a lot, and I have taken up smoking too.

If you want to create emphasis, use the comma to add a little pause to make sure the reader realizes the impact that the too is making on the meaning of the sentence.

Is that a pack of cigarettes I see in your pocket, Bob? I, too, have taken up smoking.

The Chicago Manual of Style also says that commas can be used when you want to signal an abrupt change of thought:

Shirley knew she didn’t want to mow grass for the rest of her career, but she knew, too, that she never wanted to sit in a cubicle either.

Here’s is what grammar blogger/writer Bonnie Trenga (via Grammar Girl) has to say about it.

There is no right or wrong here. Comma or no comma after “too” is really up to you and the context of the paragraph where the “too” sentence is. If you want to emphasize your thought, you can add the comma to slow the sentence down. If no emphasis is necessary, then no comma is necessary.

So, Marie, it seems the choice is yours.

The next question comes from Leif:

Fragmented sentences can be used stylistically. Do you believe there is a point where this becomes confusing or turns off the average reader? How do you feel about using fragments?

Personally, I feel great about using fragments. I use them often, but, being a grammar columnist, I have been scolded more than once by my readers for committing such sins as starting a sentence with the words because or and.  To such criticisms, I typically respond with some snotty comment like, “If you are doing it on purpose, it’s ok.”

That said, fragmented sentences have their place. In creative prose, a limited number of fragmented sentences carefully balanced with complete sentences that vary in length and tone is perfectly acceptable. If you use them, use them deliberately to avoid appearing like you are just too lazy to string together a proper subject+verb combination. And don’t string together a bunch of half-assed sentences littered with periods, exclamation points, and question marks in an attempt to be avant garde or edgy. It just. Looks kinda? Stupid! Balance is the key to writing that is interesting to read.

In all other writing—for work, for grants, for strangers, for employment opportunities, etc.—it is best to avoid sentence fragments completely or, at least, keep them to a bare minimum. The reasons for this you listed yourself in your inquiry:

If you want to read more about what sentence fragments are, Grammar Girl offers an entertaining primer which you can read here. If you want to read about how to build complete sentences, you can check out my article Clause I Said So: A Refresher Course on Sentence Types.

Answering these next two questions might land me in a heap of doo-doo, but I do think there is an important issue that underlines each of them.

Why does it seem people on the political Right have a lesser grasp on grammar and the English language? Is this proof that Republicans are indeed less intelligent than the rest of their fellow humans?

Asker Leif from part two of this article had a similarly themed question:

How come people on the left use adverbs more than they should? Are they on the effeminate side when compared to average humans or are they really really interested?

While I can’t comment as to whether or not “Republicans have a lesser grasp of the English language,” nor can I comment as to whether left-leaners’ alleged abuse of adverbs means they are “effeminate” (mainly because that is preposterous and I think Leif is being facetious), I can say that both questions point to the most important thing any writer should keep in mind when stringing words together—RHETORIC. Rhetoric makes the world go ‘round. Every ad, every song, every story, every purveyor of news or information, every politician, every teacher, every business mogul, every salesperson, EVERYONE uses rhetoric to communicate a message.

1: the art of speaking or writing effectively: as

a: the study of principles and rules of composition formulated by critics of ancient times

b: the study of writing or speaking as a means of communication or persuasion

b: a type or mode of language or speech; also: insincere or grandiloquent language

The key word you might pay attention to here is “persuasion.” Not all rhetoric is meant to be pompous or insincere, but it is meant to be persuasive. Properly used rhetorical devices in writing (or speech) can be used to persuade the reader to see the writer’s (or speaker’s) point (and, hopefully, agree with that point). Furthermore, it helps if you tailor your message to your intended audience. Politicians, advertisers, media sources, evangelical preachers, kindergarten teachers, and anyone trying to get a message across is going to use language that best suits its intended audience.

Right, left, middle, moderate, north, south, east, west, progressive, regressive, inside out, upside down—rhetoric is something we all should pay attention to. It is NOT always WHAT is being said that makes the most impact on a reader, but HOW it is being said. Any entity in the business of convincing people to do or think anything (see media, advertising, business, politics, etc.) knows this to be true and use all the rhetorical devices in their power to convey the message INSIDE the message.

Got a question for me (preferably a question that is actually about grammar or usage)? You’ll get another chance next month! Submit your question via email to Taylor@litreactor.com.

What I find more troubling is when politicians (see also: corporations and military) use passive as a way to avoid ascribing blame to a subject, or even identifying one.

"That is being looked into."

"Negotiations have been ongoing."

Thanks for the advice on the fragments.  Just so you know I was without a doubt being a smartass and lacked seriousness with that comment.  His comment just screamed for a response to it.

Would love to ask how you would punctuate *****  Today I too am wondering why Charlie Pride has not receved a Kennedy Center Honor.  I placed commas after Today, I, and too, but was criticized for the placing of three commas in the sentence. I was stressing, in my mind, the "Today" and "too." I totally appreciate this site.

Great rhetorical response to the left-right questions, and the questions were great examples of stereotyping too.

This is a great post. I like this topic.This site has lots of advantage.I found many interesting things from this site. It helps me in many ways.Thanks for posting this again. windows 10 pro ราคา

I can set up my new idea from this post. It gives in depth information. Thanks for this valuable information for all,.. Digital Marketing

Thanks for the blog loaded with so many information. Stopping by your blog helped me to get what I was looking for. инженерные системы

Great things you’ve always shared with us. Just keep writing this kind of posts.The time which was wasted in traveling for tuition now it can be used for studies.Thanks virtual toys

I have read your blog it is very helpful for me. I want to say thanks to you. I have bookmark your site for future updates. RSFHOLDINGS

I've been searching for 한국야동 hours on this topic 무료야동사이트, and finally I found your post 무료성인야동, and I've read your post 일본야동 and I'm very impressed 무료야동. We prefer your opinion 성인사진 and will visit this site frequently to refer to your opinion 성인야동. When would you like to visit my site? 조개모아

Please continue this great work and I look forward to more of your awesome blog posts. เว็บtiger

Great content material and great layout. Your website deserves all of the positive feedback it’s been getting. Home depot health check

Everything has its value. Thanks for sharing this informative information with us. GOOD works! 토토커뮤니티

I visit your blog regularly and recommend it to all of those who wanted to enhance their knowledge with ease. The style of writing is excellent and also the content is top-notch. Thanks for that shrewdness you provide the readers! Jenna Bush

What is an outstanding post! “I’ll be back” (to read more of your content). Thanks for the nudge! Ross store