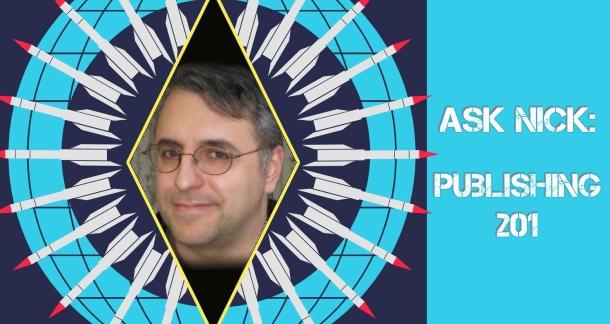 Hello, and welcome back to Publishing 201—an occasional column in which I'll answer your questions about writing and publishing, so long as they haven't been asked and answered a million times already. There is plenty of 101-level advice out there, and thousands of writers who can repeat it, but very little has been written for writers further along in their careers or aesthetic development. If you have a 201-level question you'd like me to answer, reach out!

Good question, this one, and the answer may cause you unending despair, forever!

Why do some authors have a book that tanks and never earns out and bounce back fine, while others are done forever thereafter?

Good question, Maggie! First, for any 101-types who may be reading this, let's quickly define "earning out." A book's advance is just that—royalties on books sold, paid in advance of the book actually selling any copies at all. So if one gets an advance of $5000 and a royalty of 10% of the cover price, or $2.50 per book, we can imagine that the publisher would like to print and sell 4000 hardcover copies of this book at $25.00. (There are many more factors that go into advances, pricing, royalty percentages and print runs, but this is just a simple example.) After selling 2000 books, the book is said to have "earned out" in that the advance has been paid off. So for that 2001st sale, huzzah, the author may one day receive a check for $2.50.

Many books never earn out their advance. However, a publisher with a reasonable handle on expenses will earn a small profit on some books that do not earn out. A royalty is a margin, and the publisher's own margin is usually higher than the royalty—it might be 12.5% to the author's 10% on a hardcover, for example. So failing to earn out is not the same, necessarily, as being unprofitable for the publisher, though no publisher would be happy with books that don't earn out as it means, from their perspective, that they offered too high an advance. They could have kept that money!

Now that we have done away with the assumption that a book not earning out is the same as a book not being profitable for the publisher, let's answer the question Maggie asks:

Publishing is less like simply taking the SATs and more like actually being accepted to a private college with competitive admission. College acceptance often includes the SATs as an "objective" measure of student quality, but much more goes into an acceptance than scores—musical or athletic talent, demographic/regional interests spread, parent donations, legacies, individual peculiarities, etc. The Publishing-101 Industrial Complex tends to obscure all these other factors, and instead focuses on the SAT-like elements of publishing: writing of publishable quality (not the same as high quality!), cultivation of social media followings and the building of a platform, inchoate demands for writers to be "professional" or even good "literary citizens" and other junk that's easy to replicate and systematize...and of course package and sell to aspirants. Basically it's all stuff any fresh-faced and talented provincial can pull off.

But there ain't nothing special there.

Publishing doesn't necessarily pay much, and the US industry is centered around New York. So how do you lure people to enter the field? You do so by paying them in intangibles—prestige and power. Publishing was once known as a "gentlemen's business", with the word gentleman meaning "a male alcoholic with family money." These gentlemen in turn recruit from leading liberal arts colleges that cater to students wealthy enough that of course their parents will subsidize their New York City rents. A segment of the cultured rich ran publishing for decades before being gobbled up by international conglomerates that even the dustiest of old money could never compete with.

And yet rents are still high and publishing is still a regional business. We all may roll our eyes at someone who moves to New York to become a writer in these days of email and Amazon, but it remains a reasonable strategy if you wish to be special. Publishers and editors are paid partially via prestige and power—they exercise that prestige and power on the part of writers they believe in. Special writers. Writers who become friends. Writers who deserve another swing at bat in the six-figure leagues. Over and over.

Are you special? Depends. Where did you go to school? Who did you meet there? Where do you live now? How close is it to the L? Who are your best friends; who do you date? Do they all have the same "publishing haircut" (asymmetrical bobs for women, Princetons for men)? Is exposed brick good or bad? Are you suspicious of anyone who can write a book in a year? Are you from a "good" family (which is different than a "good family")? Do these questions make perfect sense to you? No? You're not special.

Some authors are subsidized despite failures due to the reputational economy within publishing. While this is mostly a phenomenon in literary publishing (including literary non-fiction), it happens in genre publishing as well. Gene Wolfe was a thrilling talent and rightly considered one of the best science fiction/fantasy writers of the 20th century, but he published his share of clunkers and only occasionally made any money for his publisher—however, his editor was very prominent and thus Wolfe was protected from his own commercial failures. It's not bad that some people are special; you wouldn't want to enter a bookstore in a society where the accountants made all the decisions rather than just eighty percent of them.

Most people who get large advances and fail to earn out aren't special: they get to change their names, or write for much less money for smaller independent presses, or hit the writer's conference/college circuit, or marry well. Specials who fail will continue to be subsidized with reasonable-sounding excuses surrounding sunk costs. "Sure, nobody bought the book, but it was mentioned in the Times three weeks in a row, and librarians loved it, so if we can just use the name recognition the author already has..."

There are lower levels of specialness as well. If you stick around long enough, Maggie, you might become a minor-league special author. Some fraction of the college kids currently reading your books may enter the field and in fifteen years contact you about reprinting one. (This literally happened to me over the summer, and I also sold the same editor a second, new title thanks to a brief conversation.) Anyone who is solicited to write a short story for an anthology or magazine that might actually appear in a bookstore is already special in a vanishingly small way, as nobody reads short stories except for a small audience of die-hards and aspiring writers. Just like in college, by the time you're a junior nobody will care about the SAT score that got you admitted. If you're special they won't even care about your grades.

And if you're not special, you'd better keep hitting those books!

Why Six Figure Advances Will Destroy the Publishing Industry

Community Manager
helpfulsnowman from Colorado is reading But What If We're Wrong? by Chuck Klosterman October 23, 2019 - 8:55pm

I'm concerned that I'm not special. I had to google BOTH of those haircuts.

Good discussed the concept of "earning out" in the publishing industry, which refers to a book selling enough copies to pay off its advance to the author. Well described the factors that go into a book's success and the intangibles, such as prestige and power, that attract people to the publishing industry. About the publishing industry, before going into this industry, I went to college where https://myacademicprogram.com helped me with all my college admissions. Also highlights the importance of personal relationships and the role of being "special" in the industry.