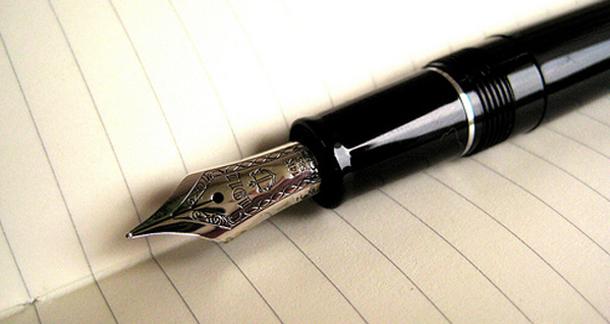 Even if you’ve read only a handful of books in your life, you’ve invariably stumbled upon an aphorism, those pithy and clever philosophical adages writers are prone to drop on the page if they want to draw attention or invoke reflection on a particular line of thought.

An aphorism (from the Greek apo (from), and horos (boundary)) is a poignant and memorable observation that petitions the reader to accept a universal truth. The ancient Greek physician Hippocrates — the same guy who gave us the Hippocratic Oath — gets billing for coining the term; and while aphorisms were initially used to catalogue medical maxims and science factoids, it wasn't long before philosophers and artists adopted the form to express moral principles or general observations about, you know, life.

I'm not an expert on aphorisms by any means — and I have a difficult time writing them — but they're great fun to read. Aphorisms fell out of fashion in the novel some time ago — and that's a shame, because writers like Twain and Steinbeck really knew how to use them well — but thankfully society still praises public figures for their ability to turn a phrase. Benjamin Franklin, Ralph Waldo Emerson, Oscar Wilde, Winston Churchill, Dorothy Parker and Truman Capote are just a few celebrated over the years for their aphoristic wit. There are entire communities online offering troves of classic aphorisms, as well as forums where writers can post and share their own. And if you’ve ever stumbled across the “Quotable Quotes” section of a Reader’s Digest, you're familiar with where grandpa steals his wisecracks. The fact is, we still love aphorisms. They're entertaining, and more important, studying these adages can teach you a lot about writing craft.

Here's a few of my personal favorites:

“Nothing is more humiliating than to see idiots succeed in enterprises we have failed in.”
— Gustave Flaubert

“Life beats you down and crushes the soul, and art reminds you that you still have one.”
— Stella Adler

“If money is your hope for independence you will never have it.”
— Henry Ford

“The history of philosophy is to a great extent that of a certain clash of human temperaments.”
— William James

“Liberty begets anarchy, anarchy leads to despotism, and despotism brings about liberty once again. Millions of human beings have perished without being able to make any of these systems triumph.”
— Honoré de Balzac

“Before you diagnose yourself with depression or low self-esteem, first make sure that you are not,
in fact, just surrounded by assholes.”
― William Gibson

In terms of structure, a few things are instantly noticeable here. First, the obvious: aphorisms are short. Moreover, it seems that, like sentences, they can be divided into a few structural camps. The most common is the shortest, the Declarative aphorism. This is an aphorism in which a simple, declarative statement showcases a proposition the writer holds as self-evident. “The rarer action is in virtue than in vengeance.” (Shakespeare, The Tempest) Second is what we might call the Compound aphorism. This is an aphorism composed of two independent clauses. “What can be said at all can be said clearly, and what we cannot talk about we must pass over in silence.” (Ludwig Wittgenstein, Tractatus Logico-Philosophicus) Finally, there’s the Two-Part Aphorism. This is a rarer form of aphorism in which the adage is composed over at least two sentences. “There are only two ways to live your life. One is as though nothing is a miracle. The other is as if everything is. I believe in the latter.” (Albert Einstein)

Aphorism expert James Geary wrote a fun book on the subject titled The World in a Phrase: A Brief History of the Aphorism. Geary refers to aphorisms as “literature’s hand luggage." They're compact stories, precisely honed to reveal an entire world in incredibly economical form. In his book, Geary claims all good aphorisms share five essential components: they’re brief, they’re definitive, they’re philosophical, they’re personal, and they have a twist.

I'll add another qualification to Geary's list: aphorism are poetic. They have a musical cadence; they abide by deliberate pattern-establishing pentameters. And if you’ll notice, the most common location for an aphorism — whether it’s a novel, essay, biography, speech or debate — is at the very end (or beginning) of a paragraph. Aphorisms succinctly sum up the sentiment and exemplify the meaning of the supporting text.

“Expect nothing. Live frugally on surprise.” — Alice Walker, Expect Nothing

While I'm at it, I'll add another qualification (though this is implied by Geary's assertion that aphorisms are philosophical): because aphorisms aim for universal truth, their currency is generals. In other words, you might not agree with the sentiment being expressed, but I guarantee you won’t come across an aphorism (at least not a very good one) that isn't intended to apply to everybody. Aphorisms are categorical expressions of the human experience. In other words, they’re profound.

“Love grows by giving. The love we give away is the only love we keep.
The only way to retain love is to give it away.” — Elbert Hubbard

I should mention this here: just because something sounds good — just because a phrase carries seductive power — that doesn't mean it's correct. The best aphorists understand that the axiom has to be as wise as it is witty. Johann Wolfgang von Goethe, one of the greatest thinkers of all time, famously said “the happy do not believe in miracles.” That sounds awfully good, I'm just not convinced it's true — and there are a lot of ignorant, ostensibly happy religious nuts out there to back up my assertion. Joseph Conrad once said "God is for men and religion is for women." Now, I loved Heart of Darkness and Nostromo, but that's just a dumb thing to say. In other words, just because the beats are there on the page, it doesn't make the statement any more prudent.

That reminds me of something else I’ve noticed about aphorisms: they have an attitude problem. In his introduction to The Oxford Book of Aphorisms, editor John Gross makes the astute claim that what separates the aphorism from your standard maxim is that the former seems uniquely subversive. Geary also brings this up in his book, noting that “aphorisms are not bits of uplifting text meant for passive consumption. They are challenging statements that demand a response: either the recognition of a shared insight … or a rejection and retort." Aphorisms are argumentative; there’s a noted smartassery in their content and delivery, and that’s why they’re often so humorous, self-deprecating, even mean-spirited. That’s also why comedians rely on them on them all the time. You may not agree what they're saying, but you're guaranteed to take notice.

“Every generation laughs at the old fashions, but religiously follows the new.” — Henry David Thoreau

“To be conservative at 20 is heartless and to be a liberal at 60 is plain idiocy.” — Winston Churchill

There’s one last thing I wanted to mention about aphorisms, and it addresses the final “twist” portion of Geary’s criterion. It seems to me that aphorisms are especially obsessed with contrast and contradiction. Specifically, the "arithmetic" inside many aphorisms often involves the practice of taking a word and playing it off an opposing quality.

In both cases, the “twist” lies in the use of one word that seeks to cancel another out. In the Nietzsche example, the meaning of “birth” is juxtaposed with the state proceeding death. In Einstein's, "imagination" is pitted against "knowledge."

“Believe nothing you hear, and only half of what you say.” — Mark Twain

“Moderation is a fatal thing. Nothing succeeds like excess.” — Oscar Wilde

Here, “nothing” is anchored as a consistent variable throughout, while “stop” and “help” are contrasted, and “right mental attitude” is dually contrasted with “wrong mental attitude.” The phrase “from achieving his goal” seems to dangle without a contrasting variable. The aphorism could go further and add “from failing” to the end of the sentence so as to neaten its closure, if the speaker wished.

The point is this: writers should strive to be judicious. Love them or hate them, I suggest all writers experiment with aphorisms in their spare time, if only for the sake of better understanding the tensions and alignments that exist in sentences and how the dual efforts of meaning and structure, form and function, co-exist to produce well-crafted syntax. There’s a mathematical strength to a good aphorism, so they're a great way to hone your argumentative skills. Of course, they're also a lot of fun.

Got any personal favorites? Paste them below!

edsikov from New York by way of Natrona Hts PA is reading absolutely nothing September 14, 2012 - 8:17am

Here's my favorite; I keep it pinned to the bulletin board over my desk:

"One of the symptoms of an approaching nervous breakdown is the belief that one's work is terribly important." --Bertrand Russell

Not too sure if this is considered an aphorism, but It just knocked me off my feet when I first read it. It's from Amy Hempel's Reasons to Live:

"Once I had food poisoning, and realized I was trapped inside my body"

A couple of my own:

The beautiful are not exempt from the need to be brave. But we treat them as if they are: it is how we destroy them.

We find relief in sport precisely because it has no meaning: its drama is expressed in numbers, and numbers contain no moral burden.

Interiority withdraws the body from the moment like a first step towards sorrow.

With thanks, Martin Langford (Australia)