Are You a Writer or an Author? 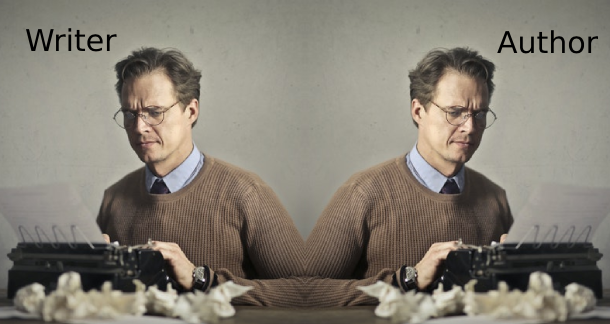 This isn’t really a debate, but it may present an internal conundrum for those seeking to create with words. It touches on the notion of identity and self-image. Wordsmiths at all levels of success discuss imposter syndrome, the idea that they don’t belong, that they are pretending to be something they are not. There is a question of worthiness this industry struggles with on a personal level. Identities among creators are so tied to their art that they constantly ask themselves if their work is good enough.

On the level of their basic definitions, "writer" and "author" mean essentially the same thing. They are interchangeable. They are generally accepted as synonyms. But when we dig down deep into who we think we are, sometimes we find we are more comfortable with one over the other, for a wide variety of reasons.

I informally asked several verbiage jacks at different levels of experience and success the question, “Are you a writer or an author?” and I got an interesting range of responses.

A lot of answers had to do with what word-slingers thought of themselves and the titles’ underlying meanings.

Identities among creators are so tied to their art that they constantly ask themselves if their work is good enough.

The clearest explanation of the difference between writer and author came from those who saw the two as graduated levels. Anyone can write, but authors are those who have published. People who subscribed to this distinction included creators who called themselves writers because they had yet to publish, and those who had been published who now considered themselves authors. Some went further to say the type of publishing mattered. Publishing in print verses ebook or on a website mattered to a couple. Others thought being published with a “real” press as opposed to self-publishing was significant to the definitions, but this was a small fraction of those who responded.

More than a few people responded with some version of the idea that "author" described someone who had completed the task of writing a work while "writer" was who you were while pursuing that goal.

A few people made the distinction that whether you did it as a “hobby” versus for pay was the dividing line. It wasn’t exactly that a person had to create full-time to truly be an author. No one specified a certain amount of income that defined an author—writers can pay electric bills while authors can pay mortgages—nothing like that. A few people, though, indicated that if you derived money from writing, that was a significant part of the equation in differentiating between the two.

Others defined writer more broadly than author. Writers could be anyone who writes anything including articles, blogs, screenplays, and more. Authors were people who specifically wrote novels, nonfiction books, and such. This was a much more common answer, and cut across all experience levels. As a number of creators have expanded their output away from prose stories exclusively, more and more of them are calling themselves writers to encompass everything they do. So, in that sense, all authors are writers, but not all writers are authors.

In other cases, how they used the titles depended on the circumstances of the discussion. Often, this had more to do with what other people thought than what the storyteller thought of themselves. Of course, this idea of what other people think of us always goes back to what we think of ourselves to a degree.

Author When It’s Time to Impress

One distinction for a few people was in correspondence with publishers, agents, or other professional communications. In these cases, a few pros indicated that they thought "author" was a clearer and more appropriate way to refer to themselves for the sake of clarity.

Most publishing contracts refer to the creator of the work as the author. I can speak to this from the perspective of ghostwriting too. In a ghostwriting contract, often the ghostwriter signs next to the title “writer” while the client paying for the work and eventually putting their name on it signs next to the title “author.” I’m sure there are all sorts of discussions that can spawn from this interesting fact, but that might be for another article.

With so much imposter syndrome among writers and authors, it serves us to understand why we struggle to define ourselves.

Newer scribblers were more likely to define a distinction between writers and authors. Maybe this speaks to the role of confidence or to the process of defining your own identity as you are still finding your voice. A number of them hesitated to call themselves authors or referred to themselves as aspiring authors. That aspirational aspect was clear in many answers. I’ve been a writer since I was young, but I aspire to be an author one day. I received various versions of this answer.

The most surprising thing I found was that the longer a person had been a scribe and the more successful they were at it—in terms of financial success or size of readership—the more likely they were to answer “writer” if they did in fact pick one. Many of these creators I would call authors without a second thought. They largely felt more comfortable with "writer," though. So many of them felt it described their work more clearly. “Author” was an accomplishment, but what they did every day was write, so they were writers. This might be the most significant finding when it comes to this question.

Too Busy Writing to Care

"I don’t know", "It doesn’t matter", or "They’re both the same", came from several people. Regardless of status, this tended to be the answer from the most prolific people of letters I asked. Those who were producing work in rapid succession due to being full-time, being self-published, or just being driven to create were too focused on the act of writing to worry about what they called themselves. Interestingly, many of them apologized after these answers to tell me they weren’t trying to be dismissive or rude. I told them it was fine. This answer was their answer. It defined them better than the titles of writer or author could.

Maybe the question doesn’t really matter. Wordy nerds are welcome to call themselves whatever they like. It might matter if the question troubles you, though. If one title makes you distinctly uncomfortable for some reason, it probably serves you to explore why that is, even if the title itself isn’t significant in the end. With so much imposter syndrome among writers and authors, it serves us to understand why we struggle to define ourselves.

Many people in many professions define themselves by their work. There are a number of ways that can be unhealthy and disrupt proper life-work balances. Writers and authors are often guilty of this imbalance in their lives, too. But there is something deeper going on with artists. Those who create with words have this idea of being a writer or an author digging deep into their identities. Many of them broke out of other identities because this notion of writing wouldn’t be stilled within them.

The gift of writing gives you great opportunities in life. Unfortunately, not everyone has such abilities. But there's no problem with that, as long as you can ask for help here https://cheappaperwriting.com/cheap-resume-writing-service/

Hi, when they ask me what service can really help you with any writing work, I always recommend top essay writing services uk. For a very nice price tag, you will get anything you want, everything you need. So give it a try!