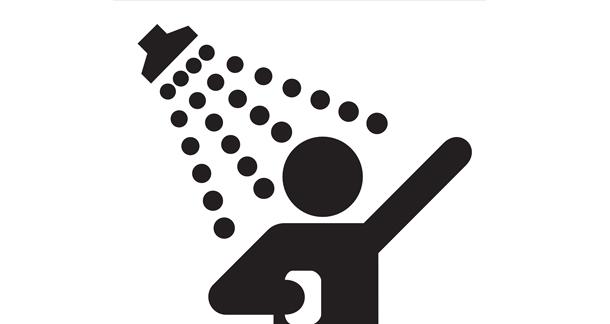 The shower is one of humanity’s greatest inventions. Okay, it’s not really an invention. We just ripped off nature’s idea—rain—but the shower is generally warmer, and it’s easier (legally) to be naked in the shower than it is to stand at the end of the driveway naked while it rains. Take my word on this one.

The shower is pretty good for cleaning the body, but it’s got a magical, second function. It’s the place where a lot of us get good ideas.

NASA engineer Jim Crocker solved a big-ass problem with the Hubble Telescope while in the shower. Archimedes figured out how to tell if a king’s crown was pure gold or partially silver while getting in the bath. This, by the by, was a defining moment for both science and first-world problems.

We’ve all done it. You’re thinking something over, you get in the shower, and BAM!—you’ve got a solution.

We could talk about why all day, but the real question is: How can you connect with the shower thinking part of your brain outside the shower? Because nobody carries a mini shower around. And who has time to take multiple showers in a day? Who has the money for those water bills? Whose hair can tolerate that much volumizing shampoo?

Your brain is like theater lighting: there’s one basic light with limitless filters.

The noise is soothing, the smells are refreshing (once you’re at least partially through, anyway).

When the body is comfortable, the mind is free. All the physical needs are being met, and the brain can ignore the basic survival stuff for a minute.

Let’s say you want to replicate that feeling outside the shower. Tend to your comfort via:

Temperature: If you could reach in front of you and change your body temperature with a dial, would you go warmer or colder? Adjust your clothing accordingly. Layer up, then layer down.

Space: The shower is both confined and free. It’s a limited space, but it’s not like a coffin. One whole side is just a flimsy plastic curtain, possibly with a Super Mario design if you’re at my house. Can you find a space that’s small and controllable without being claustrophobic?

Simple Pleasant Sensation: Do something that mildly pleases your tactile senses. Take off your shoes and make balls on the carpet with your feet. Just remember, if terrorists take over the building while you’re doing so, you’re gonna need them shoes.

Your brain is like theater lighting: there’s one basic light with limitless filters.

When you get to work, you’re thinking about things in a supervisor-approved, HR-approved, task-oriented way. When you go out with friends, your mind works differently. When you’re texting your mom,yet another filter applies.

You’re a little less inhibited in the shower. I could bring up the nudity again, but I’ve been hammering that one, so let’s drop it. Your thinking is a little looser. You aren’t as filtered because, hey, something you think to yourself in the shower doesn’t have a lot of meaning.

How can you find more unfiltered time in the day?

Writer Chuck Klosterman is an advocate of unstructured thinking time. Every day, get in a comfortable, dark place, sit or lay down, and just think about stuff. Set a timer for 20 minutes, and then...well, don’t do anything else.

Note that this is different from meditation. In meditation, you’re meant to avoid holding onto ideas. Let them pass you by, and don’t tinker with them.

In the form of freethinking suggested here, the goal isn’t to clear your mind, it’s to reframe the way you’re thinking about a problem or idea. It’s unstructured, uninhibited, and totally open to bad ideas. Let the ideas flow, and worry about filtering out the garbage later.

Many a writer will talk about a mindless physical task they engage in, which provides lots of time to think. But it’s not just the time that counts, it’s the manner.

The kind of thinking you do 5 miles into an 8 mile run is different than the kind you do in a chair in front of the computer. The places your mind goes while doing thoughtless labor are different.

Sometimes, the way to escape your body/brain connection is to busy your body. That’s why the shower is so great. You’re doing stuff, but it’s not stuff you have to think about. Your body is stimulated in a bunch of ways, but it’s more of an external stimulation than something you’re burning calories doing.

There are a lot of pricey ways that evil companies have attempted to give office workers a sense of physicality in their non-physical work. This is always disguised as being more employee-friendly, but rather than treadmill desks, weird topographic standing pads and all sorts of other stuff, wouldn’t it be easier to let your workers go for a walk?

I’m going to make three suggestions on this front, and they’re all cheap.

1. Get some exercise. It doesn’t have to be anything major. In fact, x-treme, hardcore stuff is not what we’re looking for here. But your body should probably move around at some point during the day. It doesn’t count if you’re looking at a screen or listening to something while you do it.

2. Find a way to make your writing just a little more physical. Stand if you can. Write by hand or, if you’re really committed, with a typewriter. See if you can make your body a bit busier while you write.

3. If you’re thinking, stop staring at a blank screen, pick up a deck of cards and start shuffling. Stack cards. Deal them into two piles, no counting. Keep your hands moving in mindless ways while you think. Engage the physical and wait for the ideas to show up on their own.

Time spent without multiple tasks vying for attention is what makes a shower such a powerful thinking tool.

The shower might be one of the few significant stretches of time we spend alone during a normal day. Maybe some of you get sexy in the shower, and if that’s your thing, rock on. But for the rest of us nerds, just being alone for a brief period makes a lot of difference.

Carve out some extra time to be alone during the day. Walks are really good for this. Parking your car somewhere and just sitting is another good one, although people think you’re either weird or work somewhere so horrible that lunch in your car is better than spending one more second in your hellhole office.

One Thing At A Time

The biggest advantage of the shower is that nobody is expected to do productive work in there. You’ve got one mindless task: Clean your body. Nobody expects you to stop mid-shower and do something “real quick.” Nobody is emailing from the shower, nobody’s managing spreadsheets.

Time spent without multiple tasks vying for attention is what makes a shower such a powerful thinking tool.

To get a similar effect without the shower, try what I call a Dump Notebook. Hang on, don't get scatological here.

When you sit down to write, have your Dump Notebook open next to you. Then, when you’re in the middle of working and think, “Oh, balls. I need to get 9 volt batteries for the stupid smoke detector,” immediately write it down in your Dump Notebook, then let it go.

By taking the extra nonsense swirling in your head and transferring it somewhere else, you can unload it, stop using your brainpower remembering it, and focus on the task at hand.

Do you do your best thinking in the shower? Or do you avoid them altogether? Maybe DON'T let us know in the comments.