Analyzing the Three-Act Structure in Tolkien's 'Fellowship of the Ring' 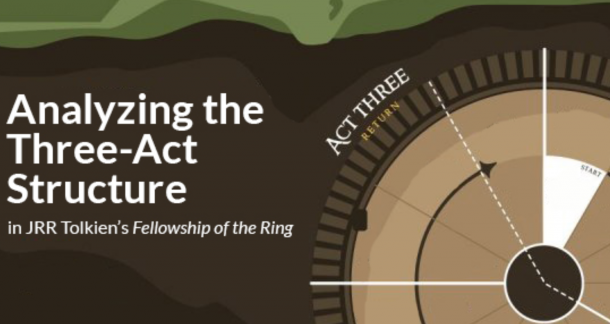 As the old adage goes, good things come in threes — and it’s no coincidence that this includes J.R.R. Tolkien’s famous Lord of the Rings trilogy.

To celebrate the publication of The Fellowship of the Ring in late July of 1954, we’re taking a look at how Tolkien used the three-act structure to create a masterpiece. There’s no author who towers over one genre like Tolkien does with fantasy — so we might as well analyze the best, right?

So get ready to put on your best Middle-earth hats, gulp down your second breakfast, and let’s go on an adventure in one, two….three.

Act One - The Setup

At this point this history begins.

This is where the author (you guessed it) sets things up. In Act One, we’re given basic information that we will need to understand the implications of later plot points.

In The Fellowship of the Ring, Tolkien starts us off with a birthday party — more specifically, the 111st birthday party for Bilbo Baggins, an old hobbit who’s about to say goodbye to his hometown. Right before he goes, Bilbo fatefully leaves behind a mysterious ring for his nephew, Frodo Baggins. Action stirring up? Check. That’s the inciting incident: the moment that thrusts Frodo, our hero, into the main plot of the story.

Our first plot point is when Gandalf reveals to Frodo that the ring is the One Ring of Power forged by the Dark Lord Sauron —  who, incidentally, wants to use it to envelop all of Middle-earth in a second cloud of darkness. A sign of trouble brewing on the horizon? Double-check.

Now that Tolkien’s successfully set the plot in motion, Frodo leaves the Shire with his friends, Sam, Merry, and Pippin, to journey into Act Two…

What shall we do with the Ring, the least of rings, the trifle that Sauron fancies?

Now the protagonist must encounter some minor obstacles (in Frodo’s case, this includes...being stabbed and ambushed by Ringwraiths). But, luckily for the story’s purposes, he and his friends still make it to Rivendell — a place where they hope to gain more clarity on the developing situation. This section is known as the rising action.

Tolkien makes the Council of Elrond that consequently occurs in Rivendell the midpoint of the novel. In a nutshell, Frodo gets himself into a bit of a pickle when he agrees during the Council to haul the ring all the way to Mount Doom in Mordor — the only place in Middle-Earth where it can be destroyed. Mordor also happens to be Sauron’s personal playground and where all evil things lie. Piece of cake. But a coalition of elves, humans, hobbits, and dwarves importantly forms to protect Frodo on his journey to Mordor.

So we're well into the story by now, but not totally sure of the outcome. Therefore, plot point two is the start of the Fellowship's journey to Mordor and Mount Doom. In terms of the three-act structure, this crucially makes our protagonist proactive in seeking their goal — the midpoint has occurred and they have to do something about it now.

Then shouldering their burdens, they set off, seeking a path that would bring them over the grey hills of the Emyn Muil, and down into the Land of Shadow.

As everyone knows, Act Three of The Fellowship of the Ring is only the end of the beginning, since the novel is but the first act in another three-act structure: The Lord of the Rings trilogy. But Tolkien cleverly makes this novel self-contained, too — so it still has all the trappings in its third act: a pre-climax, climax, and denouement.

Let’s re-join the gang as they head towards Mordor. The pre-climax occurs as the Fellowship travels South— they can’t make it through the icy Pass of Caradhras, so they change their route to go underneath the Mines of Moria. This leads to the Fellowship’s most intense moment yet: Gandalf fighting the Balrog on the bridge of Khazad-dun and falling into an abyss. This is a dramatic obstacle to Frodo’s journey, to say the least — the biggest (emotional) challenge he’s faced so far.

That is... until we reach the climax. The remainder of the Fellowship flees Moria, distraught by the death of Gandalf. They arrive in the woods of Lothlorien, home of the elf Lady Galadriel. As one might do with any evil instrument, Frodo frantically tries to offload the One Ring to Galadriel (and we can’t blame him), but she refuses. This is the climax because it signals the novel’s overarching conflict: Frodo must be the one to destroy the Ring.

The denouement is the famous aftermath that we all know today: the Fellowship travels downriver, Frodo walks into the woods for some peace and quiet, and Boromir tries to steal the Ring — but fails.

Thusly, the Fellowship is split up and the path of the next two books in the trilogy becomes clearer as Frodo decides to carry on the journey to Mordor alone with Sam. This just goes to show why ‘denouement’ is sometimes a better term than ‘ending’: here, our hero’s goal is redefined and made more solid rather than achieved — which is just as significant.

What does all of this go to show? The Fellowship of the Ring is a beautifully structured novel all in itself — and good things do indeed come in threes. Tolkien’s use of the three-act structure created a classic plot that still captivates readers 64 years later. At the end of The Fellowship of the Ring, we’re left reaching for the next two books in the trilogy. In Gandalf’s own words: “Even the very wise cannot see all ends.”