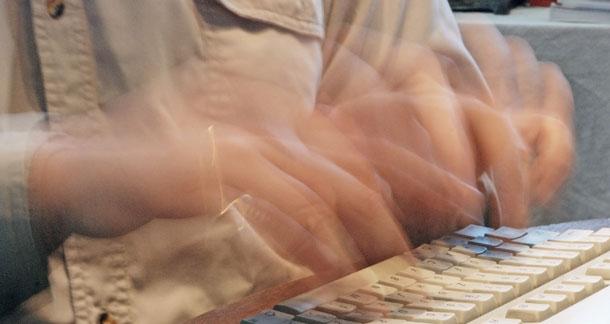 When I sit down to write, several things can happen:

1) A brilliant idea I've been holding on to with a mental death grip slips away the moment I set my fingers on the keyboard, and I’m left wondering what was so great about the idea in the first place.

2) I furiously whip out five or six ideas that I have been cooking up, but they all come out unfinished, still soft in the middle.

3) I start with nothing but a blank screen and a cup of lukewarm tap water, and I take the first particle of a thought and start writing; suddenly, I have 1000 words.

Strangely enough, the stories that I start on a whim or as part of a semi-random writing prompt go a lot farther and are less subject to my crippling writer’s block. Sometimes, I get so into it that I end up writing about something I really care about. It's like getting in the car and setting out in any direction, then realizing after a few turns that you know where you are, and the landscape seems so much more interesting than when you mean to go there.

That's why National Novel Writing Month is great; on November 1st (or 2nd), you sit your butt in the driver's seat, hit the gas, and drive as fast as you can in any direction. In case you aren’t familiar with NaNoWriMo (www.nanowrimo.org), it’s a brilliant development for the inspirationally-challenged writer. Every year during the month of November, thousands, maybe millions of people  sit down around the world and try to crank out a 50,000-word novel in 30 days. There are no real rules, just hit the 50k mark by the 30th of November and you win. The prize may only be bragging rights among your literary friends, but it's free and the motivation it provides is priceless.

In anticipation of National Novel Writing Month, my October columns will focus on novel-writing discussion and prompts that will help you warm up for the noveling marathon. Even if you don’t plan to run this year, you can follow along as all topics are general and applicable across genres and writing styles.

Ok, let’s get warmed up with a plot-generating exercise:

When I was a kid, I had a book that had a bunch of pictures of animals. Each page was split into three parts, and you could turn different sections of the page to create new animal hybrids. For example: an Oscoonphin (an ostrich head with a raccoon torso and a dolphin tail.) Or, the Plurtlephant (a platypus head, turtle torso, and elephant feet.) Mostly the creatures turned out awkward and sort of frightening, but every once in a while, a combination made a vague kind of sense; for instance the Owlorsver, a creature consisting of an owl head, horse torso, and beaver tail. I could see how something cunning, strong, and crafty might actually thrive. Even though I never would have put those elements together on purpose, it works.

Using the same kind of logic when generating a story plot can be useful. Consider the story as a creature consisting of three parts:

The head: the beginning or the inspiration for the piece
The torso: the middle or the guts, where the real work takes place
The feet and/or tail: the ending, the base upon which the story stands and stays balanced

Without all three, a story can’t survive. I've read plenty of stories with great ideas, but no guts; or that have a lot of fluffy exposition, but no inspiration; or (worst of all) that get off to a superb start followed by a strong middle, but inexplicably wuss out at the end. *Shudder* (We’ll cover endings in my next column.)  I find that keeping the whole story in mind while writing keeps me on track but still allows me to try different directions, so long as I bring it all together. Of course, this is merely a method and not a rule. You can always scrap any part at any time to make room for an even better idea.

Veterans of the writing workshop may have heard of the Exquisite Corpse activity. There are many variations, and it’s generally used in collaborative writing. In a version for small children, the kids work in groups of three, each drawing a section of a creature. The paper is folded so the artist can’t see the other two parts. At the end, the paper is unfolded to reveal the strange creature. For writers, three or more people can take turns writing a section of story knowing only a sentence or two of the previous section. At the end, the story is read beginning to end.

For the purpose of this article, I have modified the game to resemble the animal mix-and-match book from my childhood: I’ll provide a selection of heads (beginnings), torsos (middles), and feet (endings) which I either made up or stole from movies and books. (Extra points for identifying any of them, and there are likely multiple possible answers.) Select at random (or don't--I won't tell) one from each group and write a short story that combines the three.

Torsos
It’s discovered that the computer has a virus
The band has a fight
Parallel universe (metaphorical or actual, your choice)
A snowstorm
The car won’t start
Flashback to the 1950s
His/her face is horribly disfigured in an accident
A mysterious dog shows up on the porch & won’t go away
The new business venture is a smashing success

Stories can be posted here as comments or emailed directly to me at taylor@litreactor.com.

I'm using this! Thank you!

Vinny, that wasn't the one I had in mind, but that totally works. There are only so many literary tropes out there & this one gets used a lot. I'm not even sure if I had a particular story in mind....hmmm, what was I thinking about? Can't remember. :)

David, that's awesome. Let us know how it works for you, and feel free to share any results here. I always have better luck with "random" writing prompts. I think it forces my brain out of it's comfort zone.

cdregan from outside of Philadelphia is reading The Corrections November 25, 2011 - 3:49pm

Great idea for a website! Visitors would submit "heads", "torsos", and "tails" to participate (price of admission), then have the website generate randomized "bodies" as writing prompts and as a reward for participating.

Ooh! I'm excited. No, wait, it doesn't exist. Damn. Anyone out there good at javascript or flash actionscript? I'm willing to help design it if someone wants to build the template...