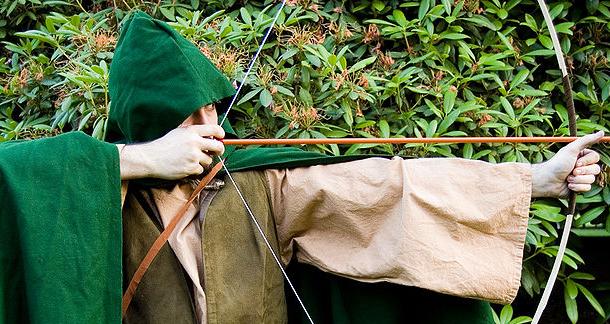 Robin Hood (or Robehod, or Robynhod— the variations are practically endless) first began appearing in ballads sometime back in the fourteenth century. In the many decades since, the myth of the famed outlaw has proven incredibly adaptable. Whenever an authority grows too powerful and begins to usurp the common people, Robin Hood-like characters start to appear in film and literature. From Batman to Katniss Everdeen, elements of the “social bandit” trope can be found in practically every genre and type of storytelling.

Rather than becoming less relevant with the passage of time, the medieval outlaw has been dragged through the midst of modern political squabbles...

It’s often taken for granted that Robin Hood was a real person, albeit one whose exploits have been greatly exaggerated by myth. The truth is the outlaw may never have existed in any strict sense outside of folklore. More likely, Robin Hood and his band of merry men are a compilation of several historic characters. Later chroniclers would pick and choose from the exploits of various individuals, eventually assembling the character that the world recognizes today.

The earliest mentions of Robin Hood were often more violent in nature than later retellings, with fewer admirable qualities on display in Sherwood Forest. Only in the nineteenth century would Hood become a romanticized do-gooder, his rise to heroism coinciding with the increased urbanization, poverty, and class division of that age. In a sense, he evolved into whatever was needed of him. But regardless of who told the tale or what details were changed, one element remained consistent from the Middle Ages up until today: the purpose of Robin Hood was to steal from the rich and give to the poor.

Perhaps the most fascinating aspect of the social bandit trope is its significance off of the pages and in real life. Rather than becoming less relevant with the passage of time, the medieval outlaw has been dragged through the midst of modern political squabbles, and the concept of “reverse-Robin Hood redistribution” has been tossed around by critics of Robin Hood’s motives and methods. For her part, Ayn Rand considered Robin Hood to be deeply evil, which seems cause enough by itself to celebrate him. Rand’s character Ragnar Danneskjold says of the famous thief:

He is the man who became a symbol of the idea that need, not achievement, is the source of rights, that we don’t have to produce, only to want, that the earned does not belong to us, but the unearned does.

A Pox on the Phony King of England (And Elsewhere)

Some titles are certainly more relevant to real social ills than others, but there is an undercurrent of the Robin Hood myth present in a lot of the dystopian fiction that’s been so popular over the past few years. The Hunger Games did more than sell t-shirts to teenagers at Hot Topic; the series also stirred something more serious in many of its readers. In Thailand, for instance, the “District 12” salute became a symbol of protest against a military coup that occurred in May. The surreal imagery that later appeared on social media and in the news teeters along the blurred lines of fact and fiction that Robin Hood characters tend to create.

A similar scenario can be cited in the popularization of the Guy Fawkes mask by Alan Moore’s V for Vendetta. Although not strictly stealing money from the rich to give to the poor, comic book and graphic novel heroes like V. and Batman still strive to shift the balance of power from the few to the many in what some have labeled a form of “chaotic good.” Moore’s character didn’t just strike a chord with audiences, he made an active and potent symbol of the Guy Fawkes mask— a piece of seventeenth century history that was appropriated by the very nonfictional hacktivist group, Anonymous.

Katniss Everdeen parallels the original bandit myth in more ways than one. Not only are both characters archers, but they both fight the authoritarian force in their respective worlds from within a forest, where more primal powers rule than human presidents and princes. Social Studies in Comparative Literature analyzes the significance of the bow and arrow in several cultures as being representative of the “polar balance of physical and metaphysical” that an expert marksman must exhibit in order to be successful. This concept neatly summarizes the core purpose of Robin Hood, and the fictional heroes that have followed in his footsteps; the social bandit is not always so much a thief of physical goods as an instrument of balance.

Now, who's up for some swinging with Phil Harris?

Interesting article, do you have a favourite adaptation of Robin Hood?

I wasn't a big fan of the recent Ridley Scott version, and I feel like a lot of adaptations of the story to film have been rather disappointing. Sean Connery and Audrey Hepburn did an interesting take on the characters in 'Robin and Marian' back in 1976.' I'm fond of the 70's Disney movie as well.

thanks for answering, I wasn't a fan of the Ridley Scott version either and have a soft spot for the Disney movie. One thing that is nice to view regardless of translation is that no matter how edgy the world thinks it is with its heroes/ anti-heroes, hope springs eternal. Robin Hood (and even his biblical and mythological forefathers) certainly embodies this.

When you are completing understudy direction, it is extremely vital that you do the activity on an individual premise reallyprofessionalessays custom writing This is on account of you need closer collaboration with the understudy for successful results. Bunch direction might be successful on the off chance that its on a typical subject.