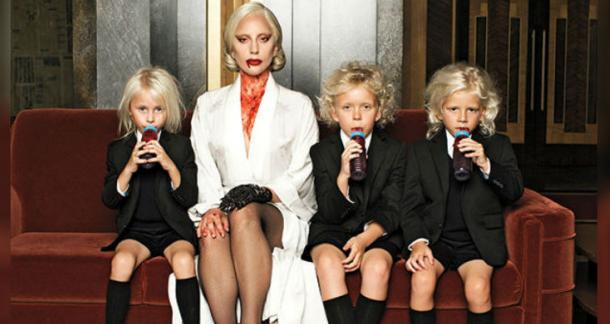 It’s no secret that Ryan Murphy’s popular horror anthology TV series, American Horror Story, is a mixed bag, from the beautifully grotesque second season, Asylum, to the consistently disappointing third, Coven. Still, as a huge fan of hotel horror and for the most-part the American Horror Story series, I had high hopes going into this season. Hopes that haven’t quite been met, but perhaps like last year’s outing, Freak Show, it will get better as the ‘story’ progresses. I put story in inverted commas because this is where the problems begin. American Horror Story: Hotel can best be summed up as ‘style over substance’. Visually beautiful, but lacking in intelligent plot and characters we care about. Whilst films like Only God Forgives can be forgiven (pun intended) for falling victim to style over substance when they look that damn good, it’s harder to justify in a television series that will suck up (another pun intended) around ten hours of your time.

Of course, I should have seen it coming. There were warning signs. The absence of the show's hands-down biggest star, Jessica Lange, was an early concern, as was the addition of Lady Gaga and consequent marketing campaign that did little else but emphasize Gaga’s involvement, a lady not renowned for her acting chops. Not that Gaga’s casting has been a failure. Actually, she’s fairly effective when dialogue is limited, and she has been part of some excellent visuals – style over substance, like I said. But having Lady Gaga follow Jessica Lange… Surely it’s the soccer equivalent of Iain Dowie replacing Sir Alex Ferguson, or for wrestling fans, it’s like The Big Show and Mark Henry trying to follow a match between Cesaro and, well, anyone. But today’s column isn’t primarily about American Horror Story: Hotel – it’s too early to cast a final judgment, the jury’s still out – it’s about the ‘hotel horror’ subgenre as a whole, and why hotels and horror go hand-in-hand. So, let’s get to it.

The key to the success of the hotel as a location and character within horror is unfamiliarity. Nearly every aspect of the hotel, from the staff to the residents to the rooms that are off-limits, are unknown. A lack of knowledge brings with it vulnerability. Guests aren’t sleeping in their own bed, but in a strange new place. In knowing others have inhabited this space before, it’s easy to let your mind run wild with questions about who these previous residents were and what brought them to your temporary room. Of course, the later it is, the darker the room, the further away from your home, the more active your imagination is likely to be. How many affairs have taken place in this room? What kind of violence have the four walls seen? How many people have spilled tears as they’ve been held against their will? What else has been spilt? How many people have died? How many of those were murdered or committed suicide? How many snuff movies have been filmed?

The intriguing thing about hotels is no one person can provide the answers to all these questions. Some may provide partial answers, anecdotes, even divulge rumors or whisperings they’ve heard from others over the years, but the only character who truly knows is the room. The hotel transcends location – its rooms are a collection of characters. You can conduct your own investigation, of course, and come to your own conclusions by deeply exploring the room. Speculating as to what the chips in the wall mean, how the cracks appeared in the table and if that stain on the edge of the mattress is really what it appears to be. Given the rich history of the hotel, of any hotel, if you believe in ghosts, chances are you’re going to see one when you spend time inside the hotel, and if you don’t believe in ghosts, well, you might just see something anyway.

Hotel proprietors can be truly odd creatures, as can other members of staff working there. Hell, if you need any further proof, need I remind you that fellow LitReactor columnist Max Booth III works as a Night Auditor at a hotel (or at ‘The Goddamn Hotel’ as he affectionately puts it)? Every time you book a hotel you’re taking a risk – you don’t know whether the staff are more likely to carry your suitcase up to your room or stab you in the head with an ice pick. Maybe if they’re feeling generous they’ll do both. Of course the obvious example of the nightmare hotel proprietor is Norman Bates. Perhaps an equally terrifying scenario – but less well-executed – is the one put forward by Eli Roth’s Hostel where the entire ho(s)tel serves as a front for sadism and the staff are all in on it.

Horror doesn’t have to end in death and decapitation though. Odd and unhinged characters are capable of disquieting the patron. We’ve all seen the troubled hotel clerk, whether in-your-face Basil Fawlty obnoxious or quiet and brooding, but there’s also something unnerving about the incompetent and naïve bellhop such as Four Rooms’ Ted. It all comes down to the unfamiliar and the unexpected. Human beings don’t like surprises. In American Horror Story: Hotel some of the most interesting characters are the staff. Perhaps the star of the show is Evan Peters, who plays the hotel’s founder, James Patrick March. Other standout performances are delivered by Denis O’Hare, as cross-dressing bartender Liz Taylor, and Kathy Bates, who plays Iris, the character with the most interesting story arc thus far.

Hotels Have A Funny Habit of Sending People Crazy

I don’t think I need to delve into an analysis of the world’s most famous fictional hotel caretaker, Jack Torrance. We’ve all read and seen The Shining. Hotels are so susceptible to sending people mad that Stephen King revisited the theme with protagonist Mike Enslin in his short story ‘1408’. A completely different take on the hotel horror subgenre from The Shining, but a nonetheless worthwhile read for the discerning horror fan. And if you want further insight into King’s writing process you can check out On Writing, where King picks apart ‘1408’ in a discussion on how he edits his work.

I’m not surprised people can go crazy in hotels. There are infinite possibilities as to what could be housed within the hidden quarters. I’m certain – seven episodes in – we haven’t seen anywhere near the entire building in American Horror Story: Hotel, and I doubt we ever will. But sometimes it’s what you do know that sends you mad. There’s a thin line. Still, at least you’re not claustrophobic and cramped up in a Japanese capsule hotel, the only way to fit your entire body in is to sleep diagonally, your only companion the sound of a drunk out-of-breath businessman in the neighbouring capsule…