Writing: All It Takes Is Guts 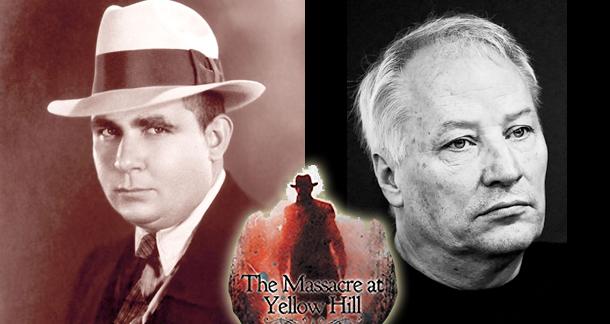 4 years ago I was sweating bullets, sitting in the bright sunlight of Cross Plains, Texas during Barbarian Days.

One: Cross Plains is a small, oilfield town that the Texas highways left behind a long time ago.

Two: Barbarian Days is a festival put on by the grand ole City Council meant to celebrate one of the giants of pulp fiction, Robert. E. Howard.  For those who may not be aware, Bob Howard is the origin point for Conan (yes, that black-haired rogue of the paperbacks), "The Tower of the Elephant," and everyone's favorite puritanical swordsman, Solomon Kane, among many others.

Going to Barbarian Days was a great way to recharge my batteries, hang out with dear friends, and do a little (see: a lot) of drinking. This year was bad, though. I was despondent in my writing career, only having been able to land success with a small, start-up comic book publishing company that never amounted to what we’d all hoped. I was ten years into spending every night at the computer, hammering the keys. I’d finish a story just glowing with the firm belief that this guy, this guy right here, “He’s the one!” But, like all the others that had been born and killed within the same month, he died the lonely death of the dreaded Form Rejection Slip. A decade is a long time to a 29 year old, so I was pretty much determined to give up the ghost on the whole ‘be a real author’ thing. That’s a dark place for a writer to be, and certainly not unique to me. It’s a landscape filled with unending forests of anxiety, deep lakes of fear, all cast over by a cloudy firmament of doubt—a gray waste that all hopeful authors traverse. It’s in that place where the ghosts of failure whisper to us familiar phrases.

Wrangle the wayward author and get them back where they belong, in the chair and pouring the truth inside them out onto the page.

“You’re not good enough. You never will be.”

“People have been doing this better than you for thousands of years.”

And for me, the worst of them all. “No one cares. No one will ever care.”

Then I met Joe R. Lansdale.

I knew about Joe's work via The God of the Razor, his Hap and Leonard series, and "The Nightrunners," but meeting the man was a transformative experience

We were sitting underneath the pavilion’s shade just outside the leaning A-frame shadow of Bob Howard's house. I was so freaking desperate for anything. Any kind of boon to lift me up out of the morass. I gathered up my courage and asked Mr. Lansdale the question that had been on my mind. "Joe, what do you do when it feels like everything you're doing just doesn't matter, you're not getting any better, and no one is buying your stories?"

Joe looked at me, and what he said is a sterling memory. "You just keep submitting. Keep pounding away. And don't give up, son. All it takes is guts."

It was the word 'son' that hit me the hardest. Hardest because he meant it.

Not innate talent. Not genius. Nothing but blood, sand, and churning desire to build your stories one syllabic brick at a time.

Those words lit a beacon.

Can I tell you, though I’m sure you already know, the heart of a writer is a mercurial thing. To paraphrase Oliver Wendell Holmes Jr.,  we “share the incommunicable experience...the passion of life at its top”. Not just those skyflung heights though, but also life’s cavernous depths. Writers write because we believe, deeply, that the stories inside us are worth telling. Ultimately, writing a story isn’t about breathing life into characters or following a plot structure anyone can teach us. It’s about hope birthed out the inescapable long-suffering found in building a language tool set, growing out the early stages of writing as ‘power fantasy,’ and finding the voice inside you that says something true about the world.

That, to me, is the most important aspect of storytelling—that a writer must say something that is true. Not necessarily real, but true to them, about the world or, more importantly, the human heart. Writers, at their best, are heralds of truth, and in order to be the person who stands up and says, “Y’all need to listen to this!”, there are only two requirements.

Truth and the guts to tell it.

That knowledge helps to wrangle the wayward author and get them back where they belong, in the chair and pouring the truth inside them out onto the page.

After the Robert E. Howard Days, I went on home and over the next week wrote a short story that turned into my very first sale. It was a West Texas cosmic horror yarn entitled "Rig Move." It's not a great story, but like Joe says, "It was the best I could do at the time, so I'm proud of it."

Joe R. Lansdale, who I consider to be the William Faulkner of East Texas, sat down with me in Cross Plains, Texas, at one of the Meccas of Pulp Literature enthusiasts. Joe, in his own simple way, reminded me that the size of your talent, the rocket ship, has very little say in determining how high you can fly. All you need is the right fuel and enough of it to get to where you want to go.

All it takes is guts.

So, here I am four orbits around the sun later, and the first novel I sold to a publisher is a weird western that deals with vampires, monster hunting, social injustice, and down-to-earth relationships strained by not-so-down-to-earth circumstances. That makes it kind of a strange cousin to the types of books Joe has been writing throughout his long, triumphant career. The book itself isn't dedicated to Joe, but the work would not exist without his down-to-earth kindness and willingness to help a struggling writer navigate his way through what seemed like, at the time, an impassable career roadblock. I'm extremely grateful for that.

In that kind of Lansdalian tradition of story/weird parable being passed down from person to person for the sake of edification you find in Joe’s work, let’s pretend that we’re on a ranch-style porch, sitting together sipping some tea out of sweating mason jars, and you’re dealing with the dark night of the soul when it comes to finishing that story of yours.

Remember, all it takes is guts.

C.S. Humble is an award-winning American novelist and short story writer. He lives in East Texas. His latest novel, the second book in his Weird Western Horror  'Survivors Trilogy", A RED WINTER IN THE WEST can be purchased via Amazon. He can be found on Facebook, Twitter (@cshumble) and at his website. Read a review of A RED WINTER IN THE WEST at the ever popular THIS IS HORROR to see if you're into C.S.'s style.

Why I Am Writing Under a New Name

Snaptube For PC is the one of the best video and audio downloader from Facebook, Instagram, and Dailymotion on your pc windows 7/8/10 and other windows devices. Snaptube Video Downloader is not officially released for PC operating systems like Snaptube For Windows and Mac. Using snaptube For windows application you can download videos and audios with different clarity. Snaptube has pause, Resume, and Stop options. Download Snaptube For PC.

Aptoide is an application which is used to search or find apps easily. You can get all types of smartphone applications from the Aptoide. It is more than a store where a user can create an own store there. Download speed is very fast and in Android, it is very similar to the Google Play Store. Download Aptoide For iOS.