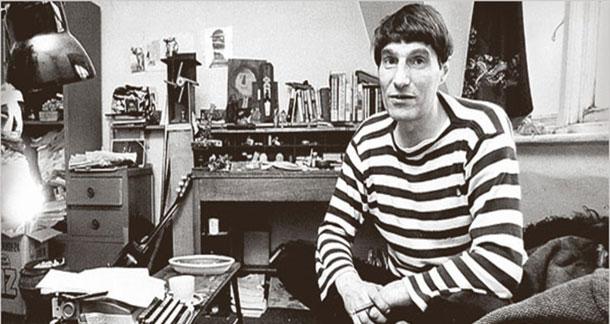 He argued that “art and life are no longer divided”, and because of this integral inter-relationship, I’ll begin with a brief biographical overview of his literary life. This will give a context for the three different examples of Trocchi’s writing that I’ll go on to introduce: Young Adam, Cain’s Book, and sigma: A Tactical Blueprint.

Trocchi was born in Scotland in 1925, and he read English and Philosophy at Glasgow University. However, his interests and ambitions were international and he left Scotland for post-war Paris in 1951. The rejuvenated City of Light was the epicentre of 1950’s existentialism, Trocchi’s profound philosophical passion, and Paris proved highly productive: Trocchi founded and edited the pioneering journal Merlin which published a plethora of writers and philosophers, including Beckett, Genet, Camus and Sartre. He also joined the Lettrist International, later the Situationist International, which positioned Guy Debord as Captain at the ideological helm.

Paris enabled Trocchi to turn his hand to writing dirty books, or “d.b.’s” as they were known, and he prolifically penned many of these for the notorious Olympia Press, whose experimental catalogue also published William Burroughs’ The Naked Lunch and Henry Miller’s Tropic of Cancer. Olympia Press also published Trocchi’s novel Young Adam (1954), which he had begun some years earlier in Glasgow, and in Rimbaudean style, Trocchi became acquainted with Parisian paradis artificial; he experimented with numerous narcotics, which lead to his life-long addiction to heroin.

The demise of Merlin in 1956 prompted Trocchi to relocate to the U.S.A. He wintered in Venice West with the beat beachfront creative community, before moving to New York City and working as a scow captain, which is conveyed in Cain’s Book (1960). The charge of supplying narcotics to a minor, which Trocchi vehemently denied, forced him to escape over the border into Canada in disguise, where Leonard Cohen, then a largely unknown poet, housed Trocchi until he was able to safely take a boat back to Britain; Cohen later called Trocchi “the contemporary Christ”.

In the U.K. in 1962, Trocchi furthered his riotous reputation as a subversive and international writer at the Edinburgh Writer’s Conference by clashing spectacularly with Hugh MacDiarmid, Scotland’s chief promoter of a distinctly nationalist tradition in Scottish literature, who dismissed Trocchi, along with fellow-attendees William Burroughs and Ian Hamilton Finlay, as “cosmopolitan scum”.

Trocchi had publicly provoked this dismissal - in an earlier panel discussion at the festival he had described Scotland, and Scottish literature, as “stale-porridge, bible-class nonsense”.

Having departed from Scotland more than ten years before, he was clearly glad of it.

Trocchi settled to London, where he most notably founded sigma, a political collective which aimed to literally achieve “cultural revolution”, and in 1965 he organised Wholly Communion, a transatlantic Beat “happening” which featured Trocchi’s friends including Allen Ginsberg, Gregory Corso, Harry Fainlight, and Michael Horovitz. Trocchi’s later life in London was spent as an antique book dealer, and he concentrated on family life. He died in 1984 from pneumonia, brought on by an operation for lung cancer.

Young Adam is Trocchi’s first “proper” novel (ie. not a ‘d.b.’, although the original version published by the Olympia Press actually was). It is an ambiguous and twisted immorality tale of sex and death, and it has aptly been described as “sexistential”; sex and existentialism are indeed right at the dark heart of the novel. It begins with the unsettling discovery of human flotsam, when the corpse of a young woman is fished out of the river Clyde by the protagonist Joe, along with his colleague Leslie. Joe is a self-obsessed “drifter”; he is an aspiring writer who works as a barge-hand, but he doesn’t just do all work and no play. Instead, he frequently philosophises, smokes numerous cigarettes, and skillfully seduces Leslie’s wife Ella, which leads to and intense and illicit affair.

Joe’s uncanny narrative is disconcerting, disorientating and dreamy, and the reader is submerged in the stiflingly claustrophobic world of the Forth and Clyde Canal, where sensation reigns supreme. Consequently, what is real and what is not becomes increasingly difficult to decipher. As the narrative reaches it’s understated yet still cataclysmic climax, Trocchi puts questions surrounding authorial authenticity and believability into interplay, whilst casting a subtle yet still scathing critique of the justice system and capital punishment.

Due to inter-protagonist parallels and analogous themes, critics have continually regarded Young Adam as a response to Camus’ L’Etranger, but I see the novel as much more aligned with Camus’ later novel La Chute (1956). Indeed, the extent of their inter-textuality is strangely profound. Young Adam is also my favourite text by Trocchi. Leslie, musing upon the young woman’s mysterious death, feels there’s “more to it that meets the eye”, and this is true of the work as a whole: although imperfect, it is a complex, boundary-smashing novel that doesn’t seem Scottish (well, apart from the descriptions of grey skies, grey water, and industrial landscape), and the potent yet perverse fusion of sex and death never lets the reader become too comfortable. It has also been adapted into a film featuring Ewan McGregor and Tilda Swinton as Joe and Ella, by the independent Scottish director David Mackenzie.

Trocchi’s next publishing punch came with Cain’s Book, a roman a clef with experiment at its visceral core, thematically and formally. Centred loosely upon the motif of heroin addiction, as well as sexual deviance, heroin shapes the structure of the narrative; it is cyclical rather than linear, and there is no tangible narrative arc. Instead, the text is comprised of collage-style episodes and notes, which take the reader randomly through past and present time and through Glasgow and New York, whilst simultaneously plunging deep into the depths of Joe Necchi’s heroin-heightened consciousness. Necchi is Trocchi’s Beat-style pseudonym, and existentialism is, once again, the fibre of the narrative blood; Trocchi/Necchi is another exiled homme revolte whose isolated inner musings reveal his attempts to come to terms with the absurdity of the world around him.

Trocchi/Necchi deftly declares in Cain’s Book that “there is no story to tell”. Ironically, there was however much anxiety over the telling of this particular anti-story: it was declared “a vicious and appalling document of evil” in court, and it was burned and banned in Sheffield, England, in 1964.

Cain’s Book is dense and brutally uncompromising, and at times Trocchi/Necchi’s narcissistic nihilism is just downright grim, but Trocchi’s pared-down prose showcases his acute authorial craftsmanship. Furthermore, whilst William Burroughs cooked a naked lunch, Trocchi cooked up a naked fix; Cain’s Book’s raw honesty has meant that it’s reputation as one of the top texts written about heroin addiction has endured.
In London, Trocchi swapped prose for propaganda, and he devoted his energy to the sigma portfolio, a sporadic collection of papers published throughout the Sixties. Sigma, founded by Trocchi, proposed that inner private space was more authentic than outer public space, and sigma’s international vision promoted the concept of being communal “cosmonauts of inner space”. This exploratory ideology was based on the belief that the move inwards to the space of self-consciousness would consequently prompt a transcendent move outwards by instigating the formation of an internationally alternative and autonomous community.

Although in his later life politics were prioritised much more than prose or poetry, Trocchi repeated certain connective values. In sigma, we see his interest with existentialism fused with anti-establishment art, in synthesis with a desire for significant cultural change founded upon “an alternative moral climate”: Trocchi’s absolute unwillingness and inability to adhere to the social norm propelled him to conceptualise his own anti-society.  In sigma: a Tactical Blueprint, which was first printed by the City Lights Journal in 1964, Trocchi rallies for non-hierarchical art where “no one is in control. No one is excluded”, and where the “spectator-creator dichotomy must be broken down”. Fundamentally, play is also preferred to work, and these ideologies are reminiscent of Trocchi’s earlier involvement with Situationism.

To Trocchi “categories die hard”. Paradoxically, however, his boundary breaking art lives on. In the different examples of his writing discussed, he evidently practised what he preached; the libertarian Trocchi candidly wrote about his empirical experiences, and his oeuvre features personal prose fused with politics and philosophy. Criticism has, and will always be, divided, but love him or loathe him, Trocchi is a hugely important yet hugely under-acknowledged transnational figure of the art avant garde. Given that this is Trocchi’s posthumous reputation, would he care? Probably not, if this typically Trocchian phrase is anything to go by: “I am outside your world and am no longer governed by your laws”.

Gill Tasker is a PhD student at the University of Strathclyde, Glasgow, researching the life and writing of Alexander Trocchi. She has worked in the music industry, including interning in NYC and at BBC Radio 1, and has been published twice in Taiwan. She is also the Editor-in-Chief of the Glasgow-based publishing house Cargo.

I have to admit ignorance before reading this article but I like the sound of this guy. So a kind of Albert Camus meets Irvine Welsh. Ha. Looks like I am going to have to check him out at some point.

I read Young Adam ten years ago.  I can still feel passages of the book.  His writing was so physical.  I hope this article introduces him to people and they get to experience his writing.