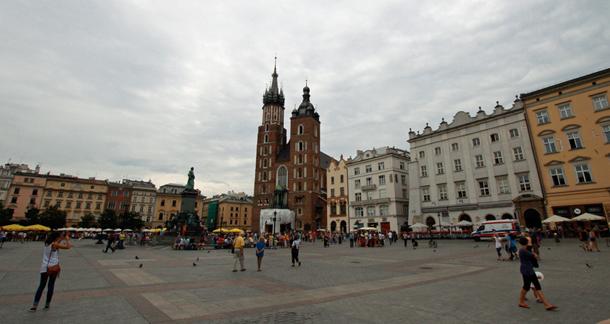 Kraków is the second largest city in Poland—and was the second stop on our Eastern European vacation (read the first entry, covering Prague, here). Going from Prague to Kraków was a little like going from Manhattan to Queens. Less crowded, smaller buildings, and overall, a much more chill vibe.

The trip required an eight-hour, overnight train ride. Which turned into an 11-hour ride when a connection due from Budapest ran late. Still, it was not uncomfortable—my wife, my friend and I had a sleeper car, and completely contrary to our expectations, we all slept well. The only downside was that we didn't have to solve a murder, à la Agatha Christie's classic Murder on the Orient Express.

I considered re-reading Murder on the Orient Express to mark the trip, but instead opted for A Long, Long Time Ago and Essentially True by Brigid Pasulka. The chapters alternate between the Pigeon, a Polish carpenter who falls for Anielica, a woman fabled for her angelic looks, and their granddaughter Baba Yaga. The Pigeon's story takes place on the eve of World War II, and follows the couple through the war and into their new life in Kraków. In the present, Baba Yaga, too, is leaving her village to make a new life for herself in the big city.

I loved this book—beautifully written and funny and heartbreaking and authentic to Polish culture without being confusing or alienating. It gives you a real sense of the city and the people. I recommend without reservation. It was nice to read something so rooted in the town while touring it.

Kraków also has a lot of interesting stories. There's the pigeons, who are all supposedly reincarnated knights (so you have to be nice to them). And the dragon who lives in Wawel Castle. You can visit his "lair", and when you leave, there's a statue of a dragon that breathes fire (cooler than it sounds).

There's a lot of interesting things to do for the literary-minded. Here are a few of them:

There are a couple of bookstores in Kraków, especially around Stare Miasto, the Old Town square. Though, most of them carry more Polish titles than English. Which is fun, or was for me, because I could dig through and look for Polish editions of books by the authors I'm familiar with.

Massolit, though, has a great selection of English-language books. It's a bit off the main thoroughfare, and I totally missed it the first time I went looking for it. But it's definitely worth the visit. It's not huge, but has a nice little café and a solid selection. Nothing, unfortunately, that I felt like I needed to buy on the spot. I left empty-handed, a rare occurrence. But, they were playing Hog in a Cocoa by Skatalites And Friends, one of my favorite albums ever. So they scored major points with that.

Located an hour outside Kraków are Auschwitz and Birkenau, the most notorious of the Nazis' concentration camps. They're very different—Auschwitz is shockingly small. So small, you wonder how it can hold so much terrible history. Though it's always crowded, it was extra-crowded the day we visited, as it was the celebration of Saint Maximilian Maria Kolbe, a Polish friar who volunteered to die in place of a stranger.

The experience of being there is odd. On one hand, it's hard to keep yourself together in front of a pile of tens of thousands of shoes, taken from the children who were sent directly to the gas chamber as soon as they entered the camp. But you're experiencing this surrounded by hundreds of strangers, many of them clicking away on their cameras. (I didn't bring my big camera; didn't feel right. The above shot, of the main gate at Birkenau, was with my phone.)

Birkenau is about a mile away from Auschwitz. It's a much different experience—more reflective, as the grounds are huge. Some of the barracks still stand, and the rubble from the crematoriums is there, too.

The Nazis are such a reliable villain in books, movies, and television. And World War II is a well storytellers go to again and again. But taking those quiet moments to tour the grounds of both camps is an experience I'm glad I had, because it offered a perspective that I think is mostly lost in the latest Nazis-as-zombies B-movie.

There's a small bookstore outside Auschwitz once you finish the tour. Before we left for the trip, my wife and I realized we couldn't find a copy of Night by Elie Wiesel in our collection. It's probably floating around somewhere, but we took it as an opportunity to pick one up.

The Wieliczka Salt Mine, about a half-hour outside Kraków, helped inspire the Labyrinth in Bolesław Prus' 1895 historical novel, Pharaoh. Which is enough of a literary connection that I can write about it here! It's worth a trip. Pictured above is a cathedral about 100 meters underground. It was carved out of salt by three amateur miners over the course of seven years. There are ornate statues and chapels and amazing little details everywhere.

Other tips for visiting Kraków:

Got questions about Kraków? Ask 'em! Did I miss something? Tell us about it—share your Kraków story in the comments.

I so enjoyed reading your review and appreciated the inclusion of what you were reading while on vacation; an underrated aspect of travelling is what the traveller is reading, as books can be incredibly influential on perspectives. Cool.

Love that you were able to enjoy the folklore of the city; it truly is a magical component of Cracow. I'd picked up this book http://bookadvisor.eu/The-Legends-of-Cracow;s,book,id,377 while I was there which was a super fun read.

Also, I agree completely with everything you said about Birkenau and Auschwitz; I described feeling like the barometric pressure changed about 10km away from the sites. Reflective and contemplative is precisely the mood of the 80+ acres of Birkenau. I wish everyone could visit both places; the experience had a profound effect on me. Thanks so much for sharing.