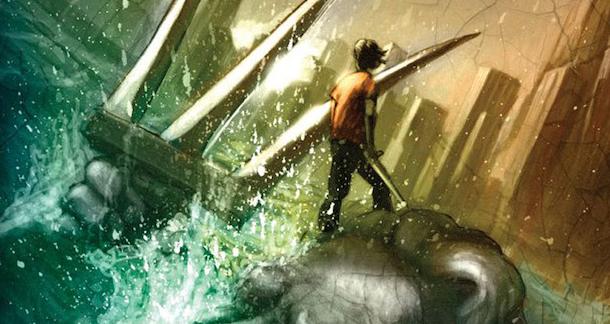 It’s official, one of our favorite demigods is getting his own Disney+ TV series. This isn’t the first time we’ve seen Percy Jackson on screen. Back in 2010 and 2013, The Lightning Thief and The Sea of Monsters were adapted for the big screen. But while fans tolerate the films, they don’t always like to talk about them. Since the film franchise flopped, fans have been waiting for a more in-depth and faithful adaptation to the beloved series, which is why it comes as no surprise that Riordan’s announcement on May 14 was met with an overwhelming amount of excitement and tears-of-joy gifs.

This announcement comes at a pivotal moment—and it’s not just because streaming services are seeing a viewing spike due to COVID-19. The pandemic has forced us into frighteningly unfamiliar territory and many of us are wondering when things will be back to “normal.” But while we continue to endure and adapt, it's time to accept that things cannot go back to the way they were before.

Once Percy discovers he’s a demigod, there’s no going back either. There’s only a before and an after, and one of the coolest things about Percy is that he doesn’t try to get back to the before. Instead, he rolls with it and is even relieved to no longer be defined or confined by what he previously considered normal. Overnight, he’s thrust into a new reality he doesn’t know much about. But he doesn’t stop moving forward and makes the most of his new reality. Diving headfirst, he goes on quests, battles monsters, saves his mom from the Underworld, falls in love, discovers he has a half-brother, has an epic showdown with his Grandpa Kronos, and much more. Percy’s story is wild, but it’s also founded on a story we know well: one of a teenager trying to navigate and shape a new world.

With so many social injustices to combat, a virus to slay, an economic downturn to overcome, and countless other problems to solve, we have to rise up and face our new reality.

We too, in some ways, are navigating uncharted territory. Coronavirus might not be an all-powerful titan with superhuman strength, but it’s still just as capable of harming us. And in many ways it’s scarier because this is a “monster” we can’t see. But if we take a page out of the Camp Half-Blood playbook and look to modern mythic heroes like Percy, we can remember that even when our world has been flipped upside-down, we have the power to rise up in the face of fear, and, if we’re willing to wrestle with the unknown, we can win. This is one of the beautiful things about Greek mythology. It depicts a humanized world that’s full of vulnerable, flawed, larger-than-life heroes, monsters, and deities who we can not only relate to, but also look to for guidance when navigating our own challenges and crises. Percy Jackson and the Olympians continues this ancient tradition of crafting relatable herculean narratives that highlight “complex, subtle, and recurring problems of human existence,” as well as comment on current issues and pivotal events impacting our society.

A quick Google search for “reasons to love Percy Jackson” will pull up a number of articles and blog posts that dive into detail about why the novels mean so much to so many. Among them are the abundance of female heroes, navigating family dynamics, representation of marginalized communities (e.g. LGBTQ, people of color, those with learning disabilities), and Nico di Angelo. What’s more, Riordan’s ability to interlace an ancient world with our modern one allows us to easily believe in it and imagine ourselves within it. Medusa runs a garden center. The lotus eaters have set up shop in Vegas. The demigods’ safe haven is a summer camp in upstate New York. The entrance to Olympus is at the top of the Empire State Building. All this makes it easier to believe that somehow all these myths and legends might just be true and, for a little while, causes our reality to fall away.

We can’t stay in the Mist forever though. With so many social injustices to combat, a virus to slay, an economic recession to overcome, and countless other problems to solve, we have to rise up and face our new reality. But when we think about what comes next, we first need to accept that there is no going back to the normal we once knew—nor should we want to. Instead of dwelling on what was, like Percy and the Olympians, we need to concentrate on what could be. This “pause,” these changes to come, those old toxic pieces we need to sift through and sort out, all of it is an opportunity to build a better, safer, and more inclusive world of tomorrow.