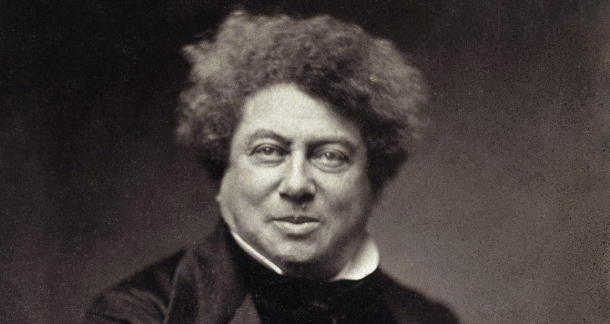 Le Trois Mousquetaires and Le Comte de Monte Cristo, better known to the English reading world as The Three Musketeers and The Count of Monte Cristo, were hatched from one of the greatest creative minds of the 19th century. Alexandre Dumas wrote as indulgently as he lived. His mixed race heritage caused him some speed bumps in the publishing world, but his quick wit and talent were not to be stifled by anyone.

218 years ago today he was born under the name: Dumas Davy de la Pailleterie. His father was the son of a Haitian and a French nobleman who became a general for Napoleon Bonapart (the first Afro-Antilles soldier) and gained fame as a great fighter. General Thomas-Alexander Dumas died when the great author we know was only 4 years old, but his mother’s stories of the brave patriarch sparked Alexandre Dumas’s love of storytelling.

...his classics remain treasured favorites and...earned him recognition alongside names like Victor Hugo and Jules Verne.

Although left without many resources, Dumas and his mother were aided by his father’s reputation and aristocratic rank. Young Alexandre read everything he could from an early age and taught himself Spanish. He proved to be an excellent student even without receiving a private education.

As a young man he first tried his hand at writing plays and essays. He found critical acclaim and financial success, but at times had to stare down bias and racism. One such occurrence is recorded, as he was publicly insulted about his African ancestry. Dumas quickly responded: "My father was a mulatto, my grandfather was a Negro, and my great-grandfather a monkey. You see, Sir, my family starts where yours ends."

Dumas inherited his father’s fighting spirit. His main strength resided in words and the power of the pen, but he was not one to shy away from the battlefield. In 1830 he participated in the Revolution to oust Charles X and found himself in good standing with the new-ruler, whom he had worked with previously.

The following economic recovery gifted Dumas time to dabble in the newly popular serialized novel and he created hundreds of stories. These led to a love of historical fiction.

Drawing from his father’s legacy, the legends of history, and his own imaginative prowess, he threw himself into fiction and created the “Celebrated Crimes” series which, gave him a strong foundation to craft his most famous work about D’Artagnan, as well as the most elaborate revenge story ever told.

Dumas was not humble. He knew his worth and earned great wealth from his stories. He also married a famous actress and is said to have had close to forty mistresses, at least four of which produced children. This lifestyle of luxury cost him a great deal. It was a struggle for him to keep his finances in order with so many romances. He and Bonaparte also did not get along, being that in his father’s last years the general disagreed with the known conqueror.

When King Louis-Phillippe was unseated in the revolt of 1848, Napoleon took his place and Dumas fled to Brussels. He became accustomed to traveling and moved on to Russia, then Italy.

Italy suited him and he founded his own newspaper there, but eventually, in 1864, he returned to Paris where he remained for the last six years of his life.

His writing held so much of himself that his classics remain treasured favorites and best-sellers. His own heritage and talent earned him recognition alongside names like Victor Hugo and Jules Verne. His legacy continues to live on and inspires current and future generations of people from all backgrounds, but especially the black community and those of mixed heritage.

Buy The Count of Monte Cristo from Bookshop or Amazon