A Book Reviewer's Bill Of Rights 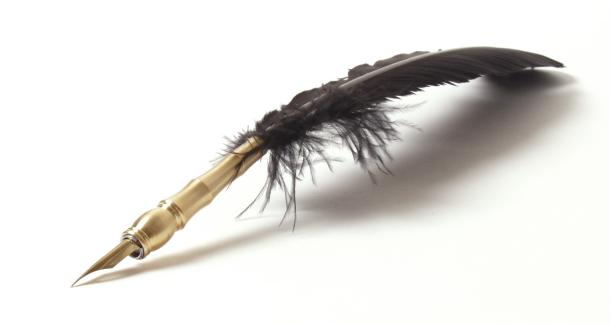 I'm guessing most of us are familiar with the Bill of Rights, the first 10 amendments to the Constitution, which give us the right to be harassed by journalists, the right to be terrified by the presence of firearms, and then a bunch of other stuff about quartering soldiers, excessive bail, and stuff that's not exciting because none of it involves using swear words or shooting stuff.

I'm also guessing many of you are familiar with the Reader's Bill of Rights. And if you're not, all you need to know is that it's a thing some people made up that asserts that readers have the right to read whatever the hell they want, if I can be allowed to nutshell the thing.

But what about a Bill of Rights for book reviewers? What rights should we have as people who not only read, but form opinions about what we read? Well, I'm glad you asked.

Amendment I: The Right To Like Or Dislike Anything For Any Reason

Yes, any material, for any reason.

Let's get this out of the way early—when we're talking about books, we are talking about something subjective. There's not really a way to be objectively "right" when it comes to reviewing a book, and therefore there's also no such thing as being wrong. There's popular opinion, and sometimes popular opinion can be overwhelming to the point that it feels objective. But it's just not. Dr. Phil is a popular guy. 'Nuff said.

Amendment II: The Right To Not Have To Defend Your Feelings

The acts of having a feeling about a book and expressing that feeling do not obligate you to defend that feeling to anyone for any reason.

Amendment III: The Right To Review Something You Haven't Finished

The thing to understand, many people define themselves by the things they like and dislike. So when you dislike something by which a person defines themself, they get pissed.

If you start a book and it's awful, you don't have to finish it to tell everyone what was awful about it.

I've walked out of movies. Because they sucked. And if someone asked me whether or not the movie was good, I would not answer by saying, "I cannot say because I did not see the film in its entirety." I would say, "It sucked badly enough that I walked out."

I walked out of the movie Machete. Because I thought it was crappy and didn't really deliver on what I wanted, which was over-the-top violence, over-the-top Danny Trejo, and basically feeling like the movie Over The Top but bloodier. I was booooored. I shouldn't be bored during Machete.

Is it possible I would have been rewarded for sticking it out? Totally. But to me, a story has to be good enough that readers/viewers are motivated to get there. If the story can't do that, then that story is not successful.

Writers work hard. It's true. And when you click one star on a book review, it can feel like a personal attack against the author.

But it's not an attack, and it's okay to do it.

Part of the game of being an artist of any stripe is accepting that there are people who will not love your book. I can tell you from experience, a shitty review stings. But if you can't take a shitty review, you need to do something else with your life. And by "take" I don't mean ignore completely and put it out of your mind, I mean fixate on it in an obsessive fashion for a couple weeks but don't do anything about it.

Amendment V: The Right To Review Material Not Intended For You

We need to read outside the things made for us. If I can only read books that are intended for me, then I'll be stuck reading the novelization of Demolition Man over and over. And as paradisiacal as that scenario sounds, I'll pass.

All readers should be encouraged to step outside their comfort zone in any number of ways. And part of that stepping out is forming opinions on what they read.

Amendment VI: The Right To Write A Mean-Spirited Review Of A Book (Not An Author)

It's allowable to eviscerate a book. It's not good to get mean about the author as a person. That's the line.

Amendment VII: The Right To Be Inconsistent

Did I ding a book for its comic book feel and then praise a different book for the same thing? Of course! I'm human. As a human reviewer working in a subjective medium, you have the right to be inconsistent.

Consistency is for assembly lines. It's for McDonald's. Being an overly-consistent reviewer means readers of your reviews will likely already know how you're going to feel about a book. And what's the point of your reviews, then?

Amendment VIII: The Right To Change Your Mind

Perhaps, on a re-read, I discover something that I'd previously hated was actually pretty good. Do I have the right to change my mind? Absolutely. This is the entire basis of science, you know. We laugh at the things scientists thought in the past, and we encourage science to change. We don't force scientists to keep thinking that a rock stays on the ground because it "wants" to just because that was a scientific thought at one time.

As you grow as a reviewer and a person, different books will hit you in different ways. I read On The Road when I was 19 or so, and I appreciated things about it that would make me full of rage now.

Amendment IX: The Right To Hate A Book Other People Love

This might sound like it's covered by having your own opinions, but it's different. There are books that, if you read and dislike, can cause you some grief. Or, more accurately, the fans will cause you grief. The thing to understand, many people define themselves by the things they like and dislike. So when you dislike something by which a person defines themself, they get pissed. But that doesn't mean you're wrong to hate the book, and it doesn't mean that you're simply contrarian.

Again, it's all subjective. Popular consensus does not change matters of taste into matters of fact.

Amendment X: The Right To Like A Book By An Author Who Is A Shithead (and the Opposite)

Jonathan Franzen pops to mind. He seems to be getting in trouble all the time, sometimes because he brings it on himself, sometimes, I think, because he's just a fun person to pile on.

Even if you think he's a shithead, it's okay to like a book he wrote.

Likewise, it's okay to dislike a book by an author who is a great person. Let's look at it this way, who are some of the most philanthropic bands? Dave Matthews, Incubus, U2, Moby. They are doing good. Does that mean I like their music more or that it's good? No way. I don't care if Hoobastank invents a time machine and goes back and rights history's worst wrongs, I'm still not going to buy their new album (or...maybe I would. If they had the ability to master time travel, it would warrant another look at their musical career, no?).

What about you? What amendents would you add?

Bill Robinson from San Clemente, CA (now) originally Stockport, England (then) is reading The Girl on the Train October 16, 2016 - 10:29am

I don't know if it counts as an amendment, but reviewers need a strong streak of humility in their makeup so that their opinions come across as genuine attempts to inform, and not as "You failed to please me,   The "Great Reviewer."   How dare you be such an incompetent buffoon!"