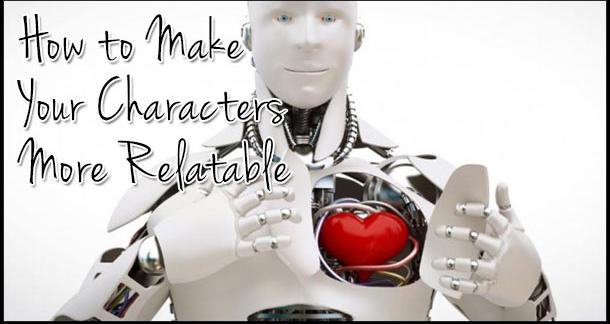 How does one write a compelling character? It's a question so complex that you might as well ask how to write a good book. That said, there are a number of factors that crop up again and again when we look at the characters who strike a chord with many of their readers. One such factor is relatability, and in this article, I'm going to talk about ways to make your character more relatable.

Not every character has to be relatable. While you can benefit from having relatable heroes, villains, or even side characters, there's no mandatory pre-requisite that says a good book must have such characters—or even that compelling characters have to be relatable. Sometimes an emotionally distant villain is preferable, sometimes a lack of resonance can make an anti-hero even more interesting, and sometimes relatability just doesn't mesh well with your character concept.

This article isn't about teaching you the "right way" to write a character. It's not about developing a mathematical formula that allows you to construct characters in some theoretically perfect way. I'm all for an organic approach to characters that allows characters to emerge from the story, world, and situations you've created. This look at ways to make more relatable characters is meant as a launching point from which you can brainstorm, troubleshoot, flesh out, or re-invigorate your characters.

There's no reason not to give your villain a puppy to play with, some charity to support, or even a moment of selflessness (even if it is for a cause that stands in opposition to the heroes).

Give Them a Vulnerability

This can be a physical vulnerability or an emotional one, but seeing a character struggling against their own weakness, desires, or limitations is resonant for most every reader.

My favorite example here is Jaime Lannister (so skip to the next section if you don't want spoilers for the Song of Ice and Fire books or GoT TV show). Jaime starts out as a repugnant character, guilty of incest, attempted child murder, and being an all-around turd-face. Oddly enough, it's as we chop off his hand that the character starts to feel fleshed out. By depriving him of his former strength, he's become much more relatable and interesting.

When you write about powerful heroes who are out to save the world, it can be hard to see them as real people. They can become symbolic mediums through which the story is enacted, and they lose that human element. One way to make a character feel more human is to introduce the minutia—of their past, their preferences, or their everyday life.

I think of Goku from the anime series Dragon Ball Z when looking at this. Goku is an immensely powerful character, he's always clashing with super-villains, he's an alien, but many viewers still find him endearing. This is done partially through introducing some of his personality's minutia: His tendency to eat insane amounts of food, his (ironic) fear of needles, and his conflicts with his wife about whether or not their son should learn martial arts. There are many details like these that can make a character feel more like a person, but if you're struggling to think of them, check out the following in-depth character questionnaire.

Failure is a powerful tool for developing relatable characters. When we see a character who winds up defeated after a major struggle, we get the opportunity to see how they respond. We can admire their resilience or empathize with their discouragement, but in any case, we get the opportunity to see them in a less-than-heroic position that makes us root even more furiously for their eventual victory.

Kvothe from The Kingkiller Chronicles is a fascinating example of this. He's such an intelligent, high-powered character that he's sometimes accused of being a Mary Sue. Further, his personality is based on heavy layers of arrogance. So what keeps him from being nothing but a bag of tricks? He's failed. The narrative frame of the story starts us from a point where we know little about Kvothe's quest but this: Whatever happened, it didn't turn out well for our hero.

While this may not be universally true, it is generally the case that your heroes should act rather than merely be acted upon. Even in disempowered positions, they can seize whatever opportunity they can to make conscious, proactive choices. But where do those choices come from? For resonant characters, I would say it comes from strongly-held values.

Now, interestingly enough, those values don't have to be ones that we share or even that lead to good things. People acting on the basis of values are acting from a rational narrative of the world that makes their choices meaningful. It's especially useful to give values to your villains, as this will allow them to move beyond being evil for the sake of evil. Take Javert from Les Miserables, whose pursuit of justice may be extreme but is nevertheless comprehensible.

Use Wit and Humor

Whether they're using self-deprecating humor, giving a snarky assessment of their situation, or just bringing others down a peg, we love characters who make us laugh. Perhaps that's just because laughter is the only language more universal than music, or perhaps it's just because we love being amused. In any case, humorous characters are far easier to connect with.

There are plenty of examples here, but for a case study, I recommend watching Parks and Recreation. Everyone in that show has a different way of making the audience laugh, but the end result is humor as a central tool for telling deeply human stories.

Allow Them to Be Self-Aware

A character who is flawed, or even dastardly, becomes far more likable when they acknowledge their shortcomings—whether they're trying to change them or are simply cool with their particular set of flaws. This is especially good as a way to counteract a habit or character trait that would make the character less likeable. Giving the character a "Yeah. I do that" moment can encourage readers to cut them some slack.

The scientific study of apologies actually solidifies this one. Did you know that admitting to your flaws, mistakes, or negative tendencies makes other people like you more and see you as stronger? An odd little fact of human psychology that explains why this particular approach helps readers tolerate flaws when those flaws are admitted.

Generosity, kindness, selflessness, and other goodie-two-shoes actions help us see a character as a "good person," and most of us either strive to be good or at least appreciate when other people are good to us.

Superman may be hard to relate to, but whatever degree of resonance we experience likely stems from how fully he embodies good-guy tendencies. But why limit this to just heroes? There's no reason not to give your villain a puppy to play with, some charity to support, or even a moment of selflessness (even if it is for a cause that stands in opposition to the heroes).

Give Them Pain and Fear

There is nothing in human life more relatable than pain and fear.

It's fear and pain that allow us to accept Walter White's destructive choices. You know ... at first.

So there you have it. I hope this list helps you develop more resonant, relatable characters. Now, this list was by no means comprehensive, so why not help me continue it? Which techniques have you used to make characters more relatable? Which characters have you connected with, and why? Share your thoughts in the comments, below.

In my first short story, I experimented with a maladaptive character for tragedies that weren't suppose to end in the main characters death.

Ex. If she doesn't like circuses, take her to the circus and meet a clown.

Ex 2. If she doesn't like rodeos, take him to one and make make him accidentally ride a bull.

I like throwing my character in the midst of a storm.

This is very useful, actually, especially since I was specifically told to make my character more relatable... I'm glad to add a few tricks to my bag.

French’s novella-length stories are like snapshots of her world, full of dark humor and unexpected twists. They also have a lot more going on than you might expect best writing services reviews each story has at least two plots going on at once, and some even have multiple subplots.