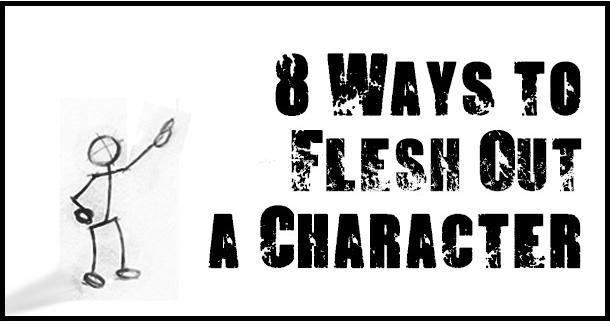 A great character can propel a story into the minds, emotions, and memories of your readers; a lackluster character can make your prose read like the average Nic Cage film. To avoid that disastrous fate, it's important to develop a strong concept of who your character is.

Many authors want to, but don't know how to, flesh out characters in this way. Luckily, between my experience as a creative writer/educator and the years I served as the best Dungeon Master in the known universe, I've developed a few strategies that can help. Here are eight of my favorites:

1. Fill out an online dating profile.

Whether you're writing literary fiction or a speculative piece, the "formal constraints" of a dating profile can help you figure out who your character is. After all, the profile questions are designed to probe for the essence of a person in a way that will be evaluated by an excessively picky audience with a short attention span and unrealistic expectations—just like your readers!

A great character can propel a story into the minds, emotions, and memories of your readers; a lackluster character can make your prose read like the average Nic Cage film.

By default, I go to the OKCupid profile, but any dating site would do. Want to have some extra fun? Attach a picture and see what sort of messages you get. (Warning: Female profiles, statistically, get seventeen million times as many messages as male profiles.)

If you're struggling to see how your character relates to the world around them, try classifying their Jung or Myers-Briggs personality type. Since this form of "typing" looks at a person's mode of socializing, thinking, feeling, and discerning, looking at your character from this perspective builds a strong foundational sense of who they are. The character also gets a neat two-word title, like "The Inventor" or "The Champion."

I recommend getting into the mindset of your character and then answering the questions of an online MBTI (Myers-Briggs type indicator). You can find hundreds of these tests online, but here's the free MBTI I have bookmarked.

4. Fill out a character questionnaire.

5. No characters but in things.

Rather than focusing on your character directly, focus on what your character owns. What are the possessions that hold the greatest sentimental value for your character? What material objects play a central role in the character's living space? What sort of clothing do they prefer to wear? Describe these material objects in full detail and, if you're looking for an additional creative spark, write a scene that integrates one or more of these items.

If you're looking to establish a strong sense of the character's voice, write a monologue for them. While this can be a story-integrated piece of writing, the main point is to dive into your character's head and see what they think about and how they express it. Start out by free-writing from the perspective of your character, following whatever train of thought—irrelevant or mundane though it may be—that crosses their imaginary mind. By separating your character from the story and scene in this way, you can get a feel for the character's values, mode of information processing, and various linguistic quirks.

If you don't know where to start, follow the advice of Merry Poppins or Mother Theresa or whoever it was who told us to start at the very beginning. Approach the character as if you were building their scrapbook. What life landmarks are worth "remembering"? What were the character's "firsts" like—first steps, first words, first kisses, and first honka-honka-wubba-wubbas included? What "Kodak moments" can be found in your character's life?

Find a song that is "your character's song." In the same way that so many of us use music to express—and find solidarity for—our experiences, you can understand more about your character's perception of themselves and their world by looking to song. This exercise can take hours and hours, so approach with care; rather than hunting through your music library, I recommend keeping this exercise in mind as you listen to music for the next few days. If your character's taste is substantially different from your own in this arena, consider loading up a new Pandora station that suits your character's preferences.

Several of the items mentioned above will be expanded on in a collection of exercises I'm putting together in the coming weeks. You can find more information on that here. There are also some strong character-building exercises in the book 3 A.M. Epiphany, one of my favorite collections of writing exercises. But what about you? What ideas or exercises have you run across? Share your thoughts in the comments, below.

dufrescm from Wisconsin is reading Do Androids Dream of Electric Sheep March 7, 2013 - 11:30am

Thanks, Rob!  You always have the best suggestions!

I am going to use your questions in the future. Number 7 is my favorite thing to do. My iTunes has entire playlists for certain characters.  If anyone ever looked at my iTunes they'd think I was insane. I have almost every type of music you can imagine: classical, Christian (gospel and new wave), WWII favorites, Oldies from 1950-1970, Classic Rock, Alternative, Punk, Pop, Rock, Disney, Broadway, Blues, Bluegrass, modern country, classic country, etc., etc., etc. Having such a wide variety has helped me stay in the proper mind set for specific characters/stories.

I love the ideas of the online dating profile and finding their theme songs..what better way to get to know your character! I use the Myers/Briggs test quite often and I find it is pretty accurate in all things.  Thanks, Rob!

This is fantastic - thanks!

Holy shit, I cannot leave this day job fast enough so I can get home and make that blank page my submissive bitch for the night.

Thank you, Rob. I'll use all of this going into my 2nd draft.

Making a Pinterest board for the character has always helped me and I highly recommend it.