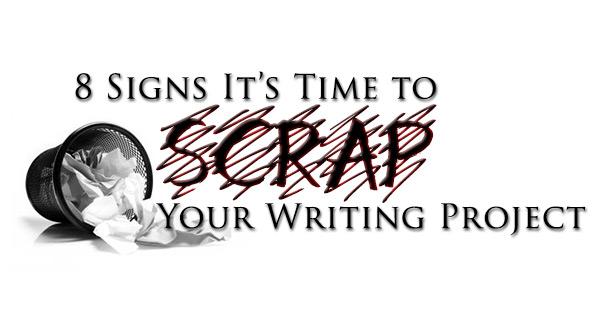 No one starts as a brilliant writer. Before we reach any visible level of success, we leave a trail of bloody, mangled manuscripts behind us. It's only once we admit our shame in this past work that we can move on to pieces with greater potential. But where is that dividing line? At what point should you revise your project and when is it time to throw the whole thing under your lawnmower?

Here are eight signs that it may be time to put a shotgun hole through the middle of your most recent manuscript.

Readers have developed a whole vocabulary for telling someone that their project is terrible without directly insulting them. Here's a quick translation of some common terms:

If one or two readers tell you your work is terrible (whatever language they use to share that information), keep pushing. It may just not be their cup of tea. But if the only response you get comes in the "salvageable" and "unique" categories, start writing the manuscript's eulogy.

2. You hate the project

Your family will lie to you. Your friends will lie to you. And most of all, you will lie to you. Bear in mind that hatred is a natural part of the writing process; if you've never hated your project, chances are you haven't spent enough time with it yet (and for me, "hatred" seems to come right before "publication" on the editing time-line). But there's a difference between the frustration of being on your twenty-first draft and the shame-riddled hatred that comes with knowing that you actually wrote that pile of garbage.

If you honestly believe the project is terrible, trust that instinct. After all, you'll lie to yourself a million ways before you finally choke out that uncomfortable truth.

In a story I wrote in 2011, the feedback I got was consistent. "Your writing is really good, but the main character is just impossible to sympathize with." This would have been less brutal if the project wasn't creative nonfiction and the main character wasn't me.

An unlikable main character will sabotage the work, regardless of the project's other strengths. Even Darkly Dreaming Dexter has a sociopathic charm. Try to add a few quirks, character flaws, or heroic strengths that make your hero worth loving (a challenge in some cases, like the piece of my own referenced above). If the plot breaks down when making these changes, it's time to rework your story from scratch.

4. Your project seems worse after you give it a break

In any long-term project, there comes a point where "one more draft" is as torturous as inching your left arm into a wood-chipper. At times like this, use the same solution that you'd use for a romantic relationship: Don't feed anyone's arms into a wood-chipper. Also, knowing your project can sometimes be a nagging lover, remember this: If you've spent too much time with your beloved, you can give the connection new life by giving yourself some time to breathe. I recommend about six weeks, but everyone finds their own recovery time-line.

After long breaks, it's far easier to dive back into the project, and I've often been surprised by how much less I hate my work once I've had time to recuperate. However, if you return to the project and find that it seems even more painful on the second attempt, it's time to let the relationship go.

5. Forcing people to read your material is destroying your relationships

I had a dear friend whose relationship deteriorated after her amateur author boyfriend insisted on spending most of their time together in reading the latest draft of his novel. Note that, if the novel had actually been good, the relationship might still be standing. Often, hopeful writers use the "critique" process as a way to fish for an ego boost. If that's where you're at, let me give you a smidge of perspective: You're not a good writer.

Ego has to be set aside before you can improve your craft. Otherwise, you'll be brutalized by the workshopping process, and you'll be preventing your readers from helping you improve. If you persist on using your sub-mediocre work as a way to fish for compliments, it will hurt your relationships. If you've reached that point, it's time to destroy your latest piece of trash before it does any more damage.

6. The problem is the middle

Reworking a story's beginning is tricky, but definitely doable; often, you can just start the story later on in the time-line. Reworking a story's ending is more of a challenge, often requiring lots of workshopping and patience. (I look to the best endings I've read, such as the final two pages of Chuck Palahniuk's Choke). But if your story's middle has issues ... that's just shorthand for saying it's a bad story.

Sometimes there are plot or pacing issues that make the middle clunky, and those issues can be resolved. But when the problem isn't stuff about the middle but the middle itself, it's time to move on. Are you a huge fan of the way you started or ended your 900-page epic? Great. Save those parts for a story where asking readers to trudge through the middle won't be considered a war crime. If you want to gut the story and re-work the middle, that's fine too—but gut the project if that's what needs to happen.

7. You wrote it for the money

If you thought you could write the next Twilight or Da Vinci Code or Hunger Games ... good on you. As long as you actually wanted to write that story. However, if you decided one day that you could copy mediocre craftsmanship as a way to make millions, you've deluded yourself.

If the only thing motivating you is the money, you're dead in the water. You need passion to bolster your perseverance and help see your project through. As Steve Jobs put it:

You have to have a lot of passion for what you're doing. [...] The reason is because it's so hard, if you don't, any rational person would give up. [...] If you don't love it, you're going to give up.

Be honest: How much do you care about being a writer? Is it a nice snippet of your identity, scrawled somewhere in the marginalia of your life? Or is it part of who you are?

For many of us, writing isn't just something we do. It's what drives us. It's not fuel we put in the tank, it's the engine that allows our minds to function. Writing is our way of making sense of this messy universe. If you enjoy writing but you're not a writer, then step aside and make room for those of us with the fire to keep writing even after we've produced hundreds or thousands of pages of absolute rubbish.

This is not a craft that comes easily. Anyone—anyone—can become a talented writer. Whether you were born as William Shakespeare or William Wordmangler, you can learn the craft. But it's not a cushy day job. It's a lifelong pursuit that will often leave you frustrated and exhausted. You will learn, again and again, that you are a terrible writer—until one day you finally scratch your way into mediocrity. Then the battle can really begin.

P.S. To help you decide if your project deserves a place on the scrap-heap, I put together a simple flowchart. Enjoy! 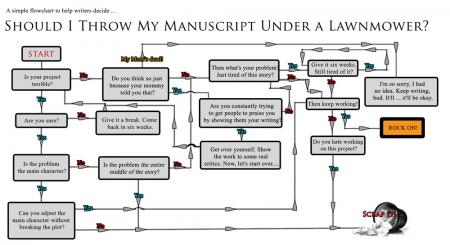 I absolutely love the flow chart--brilliant! Saved! #5 is a personally humorous one for me. It doesn't necessarily destroy, but it can frustrate. My husband I both write and good lord, we're so different in how we approach things that sometimes it's painful. There's this moment in the conversation--whether I'm sharing with him or he's sharing with me--where the listening party will simply give up, and you'll know it because the vibe goes from constructive problem-solving to an abrupt, "Well, you know, honey. It's your story, and I think you're doing great. It's going really well. Keep at it." In a perfect world, it would come with a father-son head pat, like "Keep up the great work, Champ," while you watch the kid swing at a tee ball and miss over and over, but usually it just means we swivel our desk chairs back to our respective screens and say nothing for about a minute. If the vibe is particularly tense, an "I love you, honey" delivered in the intonation of a question and an "I love you, too, honey" volleyed back as a statement makes everything A-OK. Too funny.