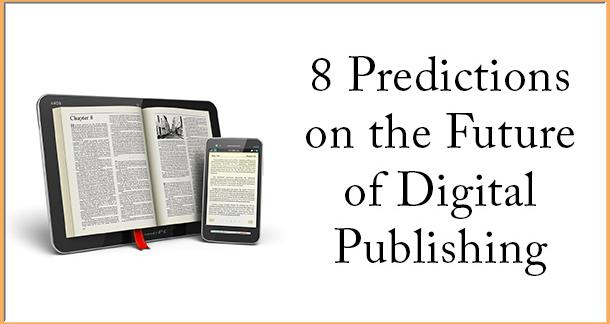 We've reached the digital frontier of book publishing, but the implications of living in this new territory are not yet fully understood. If anything's certain it's that the next couple decades will see major changes in how we think of books, publishing, marketing, and maybe even writing itself. Here are eight of my predictions about the future of digital publishing.

We've already seen a transition from eBooks being that strange and threatening outside force to eBooks being an accepted part of society that many youngsters and a fair handful of oldsters enjoy. However, as the library of eBooks expands, the formatting improves, and the reading devices become more affordable, eBooks will start being seen as little different from standard books—more akin to a different edition with a unique cover as opposed to an evil doppelganger.

While there are plenty of holdouts—both on the consumer and publisher end of the spectrum—they're gradually giving in or retiring. Teachers are one resistant group that's gradually giving in, which is more significant than it may seem: The adoption of the eBook in the classroom will support the format and provide the next generation with a personal, portable library of books by the time they graduate.

2. Publishers will adapt or perish.

In his fantastic keynote address at the 2013 London Book Fair, Neil Gaiman told the anecdote of a man who stocked up on calendars from 1993. His wife then berated him, calling him an idiot for buying the calendars of a past year. "You may think that if you like," said the man. "But if 1993 ever comes back, I’m going to clean up."

"I worry that too many of us," said Gaiman, "are certain that if only we can get 1993 to come back again, we’ll clean up." If publishers fail to adapt to the new paradigm, they will die out.

What will adaptation look like? Many have already started by releasing eBook editions alongside the standard publications. Having a healthy eBook division that formats content appropriately and promotes it through online mediums is another key factor. Other options abound, such as providing an eBook download code along with physical book purchases.

Because Amazon is currently—and will likely continue to be—the middle-man for most digital publications, the power structure of publishing agencies will shift dramatically. This will open the door for smaller publishing agencies, but the definition of "publishers" will also need revision.
The rise of digital sales and the decay of hard-copy sales will force publishers to decrease focus on creating and distributing a physical product. Their main value will, instead, be in publicizing quality content. Individual authors who publish their own work in the digital marketplace are lost in a sea of anonymity; publishers will be able to leverage their current vetting systems, connections, and reputation to launch new authors into visibility.

4. Formatting will get much, much better.

Right now eBooks are entirely readable, but many books—especially re-released classics—see a surprising level of formatting problems. This is painfully true for poetry. While improvements have already been made, there's an increasingly major incentive for improving formatting systems.

Much of the blame falls to tablets. The Google Nexus 7 gives one example of the current trend: Tablets coming in below the $200 mark. This round of tablets is the first time Google has really made a dent in the iPad's ownership of the market. Between the affordable Android tablets and the iOS lineup, the market is being saturated with tablet technology that allows everyone to read eBooks conveniently.

In response to this new incentive for improved formatting, eReaders and apps will automatically strip out common formatting problems, new software solutions will be created to make proper formatting easier, and systems to report and resolve formatting issues will be streamlined. The improved formatting will, in turn, increase the adoption of eBooks in professional and classroom settings.

5. Physical books will start to be seen as memorabilia.

I don't want to give the impression that I think physical books will disappear. Far from it. I think a hundred years from now we'll still have hard-copy books. However, they won't be seen as the primary way to read content: The advantages of direct download, decreased cost, improved note-taking and organization, portability, etc., will simply win out in time.

But physical books have an appeal based on more than mere nostalgia. A physical book is a public signifier: It is a way to show what we are enthusiastic about and broadcast that element of our identities. Physical books will be akin to a collector's edition of a movie or a t-shirt broadcasting one's love of a band. Oddly enough, this change in function is likely to improve the artistic design and material quality of the physical books.

One of the major challenges facing digital distribution—and, indeed, the reading of eBooks—is the lack of a vetting system. At a bookstore you can assume that some company has read through the book and ensured that it's not entirely terrible (though this doesn't always prove to be true). In the digital marketplace, there are many terrible books. There are also some fantastic ones. But how are the two separated?

Right now digital books float to the top when they get enough purchases and positive reviews. While these things should, presumably, reflect the quality of the content, that's not always the case. Reviews can be gamed, the presence of sales and positive feedback often reflects more time in advertising as opposed to better content, and many fantastic books never reach the point of substantial visibility.

What's needed is a leap forward. In the same way that Google's search algorithm took an entirely new concept for organizing content, Amazon—or someone else—will need to implement an entirely new system for culling the garbage and allowing the better books to rise. I believe this will happen within the next five years.

7. Battery life will decide the tablet vs eReader war.

Tablet dominance is not as secure as one might think. While the cost gap will close, some are drawn to the eReader specifically because it's a distraction-free environment where the simplicity of the hardware and software allows an impressive two-month battery life. If eReaders retain this advantage, they will likely co-exist with tablets. However, if tablets extend battery life to an even vaguely competitive level, the eReader's remaining advantages aren't likely to retain a sustainable audience.

Battery tech hasn't progressed nearly as quickly as our mobile and computer tech. Today, the most efficient of tablets will give 20 hours of use. OS improvements (including smarter down-clocking of processors when executing simple tasks like using an eReader), new battery-efficient processors, and the gradual improvement of current battery technology will improve battery life—but not enough to shut down eReaders.

But there's a lot of early-stage research being done into radically different battery technology. While still unstable and experimental, these new battery models provide anywhere from 3 to 12 times the battery life of current tech. If these models pan out in the near future, 2018's tablet could give 300+ hours of active use and months of standby time. In other words, goodbye eReaders.

With all I've predicted here, I think the most important thing to predict is that the future will remain as wonderfully unpredictable as always. We haven't made it yet, and there will be all sorts of new problems, opportunities, and technologies that change the way we think of digital content and the written word.

While frightening for some, this future is one I'm excited to participate in. Yes, some things will change, some institutions will perish—but the baby phoenix we find in the ashes is going to make a fantastic pet.

I think I'm going to name her Bubbles.

I know it's highly subjective, but from my vantage point, literally my own two eyes, I need to see some sort of LCD/LED/OLED advancement beyond the trademarked Retina display and beyond other high-resolution, backlit screens currently on the market, in order to choose a tablet over what is now, incredibly, the old-fashioned e-ink display that my own two eyes prefer.

So I'd add that there is this other variable, beyond battery life, that will influence the outcome of this "war".

Although I'll also postulate the tablet has already won the war for the hearts and minds of most people. Ereaders are niche products. We bookworms, who read for extended periods of time, who perhaps favor Orwell's Big Brother over CBS's trashy version (which is also for me an embarassingly guilty pleasure), we are not many—exception rather than rule.

If there is a war, ironically held between us typically passive bookworm types, it might be over eye strain rather than battery life—although I do find distasteful fumbling with the discomfort of a charging cord while trying to lose myself in a good book.

I would really like to have e-readers in my class, but the kids often end up playing Candy Crush or updating Facebook when they have tablets (our district has iPads you can check out for use in class). Many of the classics they will have to purchase are free on Amazon, or much cheaper. It would be great to teach from an e-reader too, because all of my notes would be accessible without writing microscopic notes in the margins :)

I will be honest, I have been resistant to the e-readers. I've had a Kindle Fire since they first came out (it was a gift) and I hated using it. It felt weird to read on it, but I was determined to make it work. This past spring I re-read Gatsby on it and have grown to love it for my bed time reading.