8 Places To Write: Writing When and Where You Can 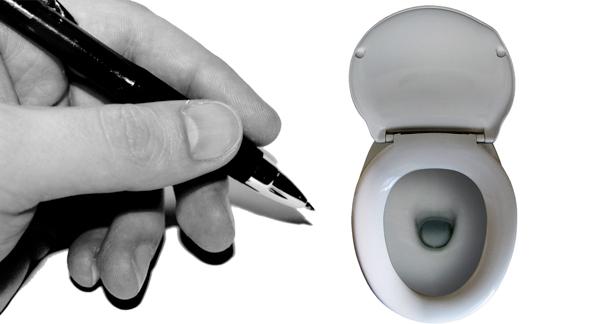 I’m a big fan of writing routines and daily habits but sometimes life gets in the way. Rather than give up and abandon writing for the day you have to utilise those opportune moments for knuckling down and getting the work done. It might be one minute in a supermarket queue, while commuting to-and-from work, or even while on the beach with nothing but spade and sand (a photographic memory is useful here, too). Here in no particular order is a list of places I’ve written and a few suggestions I’ve yet to try out.

1. In The Classroom While Students Are Working

This very article was conceived last month while I was invigilating an exam. I don’t recommend doing this at the expense of marking, evaluations or other administration your day job requires, but if you do run out of marking this is a mighty good opportunity to get some words down. This need not be restricted to exams—if you set students an assignment, once you’ve checked everyone’s on-topic you can scurry back to your work-in-progress and jot down some ideas. Depending on time constraints it may be that ideas, plot points and snatches of dialogue work better than fully formed scenes, but do what you can and play around with things.

I’m not suggesting you do this exclusively at your day job (though I know people who do) but there are always going to be small windows of opportunity. While working office jobs I’ve had the entire network go down (it wasn’t me) or programmes crash that have prevented me from getting on with my day-to-day work. Rather than curse and grow frustrated at how long it takes to resolve these problems—at the amount of time I spend on hold listening to the same song again-and-again-and-again—I rejoice, whip out my notebook and start writing (always have a notebook).

If you’re concentrating more on your story idea than the needle that’s going over-and-over-and-over the same part of your body... you might find that you’re in less pain.

But what if you don’t work an office job? What if you don’t have a notebook? Well firstly let me direct you to ‘always have a notebook’, but okay I admit sometimes you just don’t have one. That’s when you have to be resourceful. I spent a summer working at a Burger Bar, most of my time spent manning the ice cream stand. Guess what? In England there isn’t a lot of demand for ice creams in the summer, which means a lot of time not doing much—given it’s mid-July and raining right now I’ve no idea why that is. Sadly you can’t just bring a notebook to the ice cream booth (something about health and safety) but that doesn’t mean you can’t sneak a pen in and use a handful of napkins to compile your masterpiece. That isn’t stealing—we were allowed to use as many napkins as we wanted—it’s creative. Pro-tip: you can also use napkins while dining at restaurants. Remember the customer is king.

3. Via Your Mobile Phone

So originally I was going to call this ‘via your notes application on an old iPhone 4S’, but I guess that doesn’t have quite the ring to it and is super specific to my situation. This is less a place and more a method. The original ‘notes’ app will do just fine but Evernote is also a good bet. There’s no specific application recommended here, the point is to find a way of writing and utilise the hell out of it. If you don’t have a writing app text a story to yourself or for ultimate accountability text it to a friend. Via Evernote is one of my favourite ways of capturing a story whilst on the go, and what’s great is you can combine it with almost all of the other suggestions in this article.

So obviously this was going to be an entry. How could it not be? An absolute classic that enables you to be efficient while getting down to your business. Is this the ultimate productivity hack? Probably not, but many writers have done this while at their 9–5 or even in the middle of a bad date when nature calls … Admit it in the comments—this is a safe place.

I’m not suggesting you actually walk and type, though if you’re good enough at touch typing onto your mobile phone this may be a viable option, particularly for notes. I generally use walking for thinking of ideas, troubling over plot points or researching via audiobooks or podcasts.

Another option is to use a voice recorder or dictation software so you can dictate your story as you go. There are basic applications available for all mobile operating systems and some premium tools, too. Dragon Dictation is one of the most talked about applications in voice recognition, so may be a good starting point for experimentation. I’ll play around with this and get back to those interested in the comments.

6. While Having A Tattoo, At The Dentist or During Minor Surgery

You may think this entry is a joke. “Write during minor surgery? Have you lost your mind?!” Look, I’m not suggesting you actually write but I am highlighting the importance of thinking time to mull over your work-in-progress. Any time you can disconnect and switch off from reality—when you can reach that near-meditative state—is a prime writing opportunity. And guess what? If you’re concentrating more on your story idea than the needle that’s going over-and-over-and-over the same part of your body just to get the colour right you might find that you’re in less pain.

Everybody gets frustrated by long queues while shopping, but if you’re a writer you might actually seek out the longest of available queues. Once settled into your queue get out your mobile phone or notebook and start writing. I only recommend doing this while alone. There are already too many people absorbed in their phones at the expense of human interaction, so if you’re with someone else be fully present. But if this is a solitary endeavour? Write away and enjoy the hell out of queueing!

Like the toilet this can perhaps be filed under ‘so damn obvious it almost wasn’t worth mentioning’. But I’m mentioning it nonetheless. I wrote a whole first draft of a story in Japan while riding the Odakyu line into central Tokyo. I’ve written fragments of ideas while riding Lisbon’s metro. Writing has sure as hell made commutes up and down England much more interesting and I always have a notebook on hand when I’m on a plane.

So there you have it, different places to take advantage of time gaps and get more words down. Where’s the most unusual place you’ve written? See you in the comments.

This whole discussion is about how to improve writing skills and an interesting fact about this discussion is that you can find eight places to write. If you are looking for a law assignment writing service you can approach online platforms to hire them within your budget.

Writing quality content is not easy and you need to understand the topic of your assignment and then make a list of important points. If you need customized images to design greeting cards and valentine's gifts then https://masterbundles.com/happy-valentines-day-images/ is your best chance. Just choose a workbook to practice writing exercises.