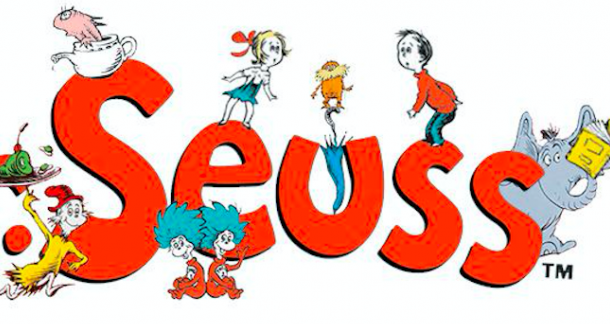 In 1925, Theodor Seuss Geisel was asked to leave Dartmouth College’s school newspaper, the Jack-O-Lantern, for drinking during the Prohibition. In order to continue working at the paper without the school’s administration knowing, Geisel decided to adopt the pen name “Seuss.” He added the “Dr.” as a poke at his father, who’d always encouraged his son to get a PhD.

On March 2nd, 94 years later, we celebrate the prolific Dr. Seuss’s 115th birthday! Since those days at Dartmouth, Dr. Seuss has published 46 children’s books — so many of which have a beloved place on both children's and adults' bookshelves alike. This list covers just eight of our favorites among many. 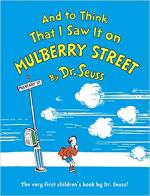 1. "And to Think That I Saw It on Mulberry Street"

It only makes sense to start this list with the first children’s book published by Dr. Seuss. The titular Mulberry Street was inspired by a street of the same name in Seuss’s hometown of Springfield, Massachusetts.

What it’s about: Young Marco is strolling down Mulberry Street on his way home from school when his father’s voice pops into his head: “Marco, keep your eyelids up / And see what you can see.” But the only thing Marco sees is a horse pulling a wagon. Wanting to impress his father with all the cool stuff he saw on his walk home, Marco begins to imagine a wild and elaborate fantasy world as he goes — complete with elephants and a brass band.

Why it’s on the list: And to Think I Saw It on Mulberry Street was rejected by 20 publishers before an old college classmate helped Seuss get the book published. Without this fortuitous connection, perhaps this list and all of the wonderful Seuss-isms we know and love today wouldn’t exist.

And that is a story that no one can beat
And to think that I saw it on Mulberry Street. 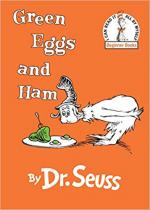 This is the #1 bestseller from Dr. Seuss’ repertoire of timeless children books, with over 8 million copies sold worldwide as of 2016.

What it’s about: A showdown for the ages. An unnamed hat-wearing character “would not, could not” eat green eggs and ham, while his adversary Sam-I-Am wants nothing more than for the hat-wearer to try them — and he won’t give up without a fight.

Why it’s on the list: Dr. Seuss’ publisher Bennett Cerf had a bit of a playful bone himself, and bet the writer that he could not write an entire children’s book with 50 words or less. The result of that bet is Green Eggs and Ham, which consists of only the following 50 words: a, am, and, anywhere, are, be, boat, box, car, could, dark, do, eat, eggs, fox, goat, good, green, ham, here, house, I, if, in, let, like, may, me, mouse, not, on, or, rain, Sam, say, see, so, thank, that, the, them, there, they, train, tree, try, will, with, would, you. Could you write something that legendary out of only 50 words? We think you could not, Sam-I-am. 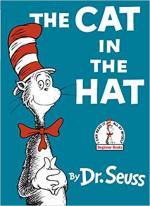 Right up there with Green Eggs and Ham for the most loved Dr. Seuss book of all time, The Cat in the Hat has been adapted into multiple films and even a stage musical.

What it’s about: Sally and her brother (our narrator) are home alone, bored on a rainy day — but as can be expected, things soon take a turn. An anthropomorphic cat wearing his now famous red-and-white-striped top hat shows up and, despite adamant objections from the children’s goldfish, the Cat (along with his pals Thing One and Thing Two) brings some lively fun to Sally and her brother... basically wrecking the house along the way. Luckily, the mischievous feline has a few tricks up his sleeve to make sure the children aren’t grounded when their mother returns.

Why it’s on the list: In 1954, writer John Hershey brought a problem to people’s attention in Life magazine: the popular primer for young children learning to read, Dick and Jane, was not, in fact, encouraging children to read. In response to this, the director of Houghton Mifflin’s education division asked Dr. Seuss to write a story that first-graders couldn’t put down. A year and a half later, The Cat in the Hat was published and accomplished just that.

“I know some new tricks,”
Said the Cat in the Hat.
“A lot of good tricks.
I will show them to you.
Your mother
Will not mind at all if I do." 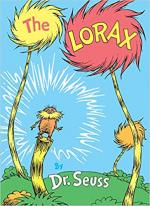 This tale of the Once-ler and his clash with the environmentally conscious Lorax is just as relevant today as it was when it was published in 1971 — if not even more so!

What it’s about: The mustachioed Lorax is the titular character. On behalf of the Truffula trees, the Lorax confronts the Once-ler — a man who has taken to cutting down Truffula trees and eventually turns the forest into a factory site. The Lorax implores the man to leave nature be, but the Once-ler doesn’t listen and learns a valuable lesson the hard way.

Why it’s on the list: Dr. Seuss said this was his favorite of all his books, adding: "The Lorax came out of me being angry. In The Lorax, I was out to attack what I think are evil things, and let the chips fall where they might." By creating funny characters that nevertheless intrigued people, he taught children about industry (through the Once-ler) and its consequences on the environment (through the Lorax).

UNLESS someone like you
cares a whole awful lot,
nothing is going to get better.
It’s not. 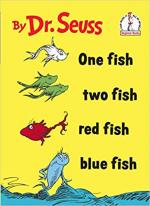 A classic that has a spot on many-a-child’s bookshelf, this book may start with fish, but it escalates into a much more exciting tale.

What it’s about: Young Jay and Kay run in pretty exotic circles: among their friends and pets are a never-ending array of amazing, fantastical characters.

Why it’s on the list: With the whimsy for which Dr. Seuss is known, paired with some of the surreal aspects associated with Shel Silverstein’s works, this book has been helping children get their first taste of reading for almost 60 years. In fact, according to the United States’ National Education Association, it is one of “Teachers’ Top 100 Books for Children.” Definitely a classic through and through!

Did you ever fly a kite in bed?
Did you ever walk with ten cats on your head?
Did you ever milk this kind of cow?
Well, we can do it. We know how.
If you never did, you should.
These things are fun and fun is good. 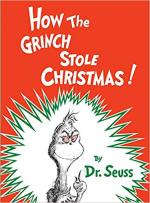 6. "How the Grinch Stole Christmas"

If you don’t watch at least one of the adaptations of this book during December, does it even really feel like Christmas?

What it’s about: The Grinch is a grouchy, green creature who prefers to live in isolation (except for his dog Max) up on a snowy peak of Mount Crumpit. He hates Christmas and decides that this year, he must put an end to the whole thing by stealing any and all Christmas-related items from the homes of the Whos — on Christmas Eve, dressed as Santa for maximum trickery.

Why it’s on the list: Simply put, this book features one of children’s literature’s most iconic characters — so much so that we’ve adopted his name to mean “someone who dislikes Christmas” (right up there with Scrooge). Furthermore, the Grinch is a complicated character. He’s a villain for most of the story, but in the end you root for him. 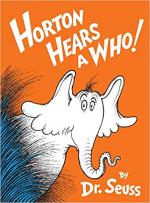 Young readers’ first introduction to the Whos down in Whoville! So if you’re reading chronologically (not that it particularly matters), this one should actually come before The Grinch.

What it’s about: Horton the Elephant returns (his first appearance is in Horton Hatches the Egg). While playing in a pool one day, a speck of dust begins speaking to Horton. He discovers that the speck of dust is actually a teeny tiny planet called Whoville, where a society of people called the Whos live. Horton spends the rest of the book trying to protect the Whos from the big bad world in which he lives.

Why it’s on the list: At its core, this is a book about kindness, compassion, and seeing others as equals. As Horton continuously reminds readers and the creatures in the Jungle of Nool...

A person's a person, no matter how small. 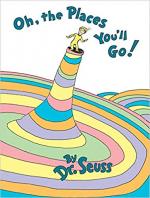 A staple gift for anyone going through a transition — particularly graduations, for its inspiring and encouraging messages of the future.

What it’s about: In this story, the reader is the protagonist, as it’s told from second person POV and refers to “you.” The protagonist journeys through many visually intriguing lands, eventually arriving at a place called “The Waiting Place.” But the protagonist does not stop here, and continues exploring, excitedly inspired by all the many places and things they might encounter.

Why it’s on the list: Few children's books have the ability to universally comfort people of all ages as they face life changes, but Oh, The Places You’ll Go! does just that. The story has an open ending, inviting readers to use their imaginations (as all Dr. Seuss books do) in order to fill in the rest.

You have brains in your head.
You have feet in your shoes.
You can steer yourself any direction you choose.

How about you? Got a favorite Dr. Seuss book? Help us celebrate the man by sharing it with us.