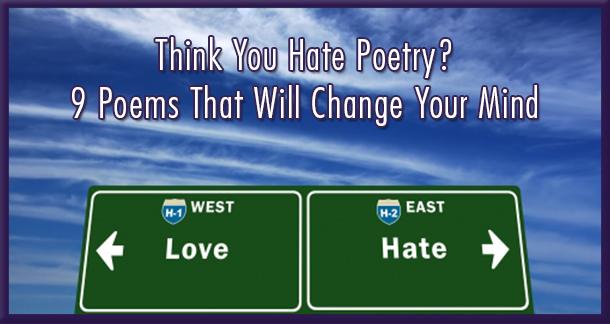 There are a great many people who say they hate poetry—and I can't blame them. After all, I had the same educational experience you had. When we were young, they taught us that poetry was "stuff that rhymes." Then, during some high school English class, a teacher decided it was time we learned "classic poetry," and we spent months counting off iambs in Shakespearean sonnets and trudging through T.S. Eliot's "Wasteland."
​Poetry is neither so grand nor so distant as we often make it out to be. Poetry is versatile, powerful, and—believe it or not!—fun.

Students are pressured to like poetry—not because they might actually enjoy it—but because it's classic. And smart people are supposed to like the classics. As a result, a strain of juvenile elitism develops that gives even more reason to dislike poetry. I've been to far too many open mics and poetry readings where people read with somber, contemplative voices, and the enjoyment clearly happens somewhere outside of the reading itself: Those who attend have the chance to pat themselves on the back and say, "I'm so smart and classy! Because I. Like. Poetry."

This isn't just frustrating to me: It's astonishing. It's like showing up for a lobster dinner and watching as everyone at the table cracks open their portion, throws away the meat, and gorges themselves on the fractured carapace. What is there to do but let your jaw slacken and your eyes open wide, trying to decide whether screaming "You're doing it wrong!" might be considered poor etiquette?

My point is just this: Poetry is neither so grand nor so distant as our lackluster education often makes it out to be. Poetry is versatile, powerful, and—believe it or not!—fun. So in celebration of National Poetry Month, I've put together a list of nine of my favorite poems in the hopes that I can show you there's a type of poetry for everyone. Let's begin.

"What Teachers Make" by Taylor Mali

When this poem went viral on YouTube, it fueled a new wave of performance poetry. It's a great example of non-elitist poetry: everyday language and relatable experiences combined to make a poem that electrifies and entertains its audience.

For Issa, each poem is a punch line. Sure, it's older work, but try to think of it as "steampunk poetry":

New Year's Day—
everything is in blossom!
I feel about average.

Or this one, which was entered into a haiku contest that asked for poems about the changing season:

Writing shit about new snow
for the rich
is not art.

While there are many translations, the Robert Hass versions (like those transcribed above) do a great job at capturing the emotional heart of Issa's work.

The poem (read in the video above by its author, Ted Hughes) does a great job of capturing my experience of love, anyway. It's an even funnier poem if you know about the rocky (and ultimately disastrous) relationship between Hughes and Sylvia Plath.

"Letters from a Man in Solitary" by Nazim Hikmet

This poem will require a bit of time, but it's worth it. It was written by Nazim Hikmet during his extended time in solitary confinement. While there's powerful imagery throughout, the most resonant comes toward the end:

You can check out the full text here.

This is one of the best examples of an energetic slam poem, and it speaks to one of my major preoccupations: The sense that I'm drowning in a world overflowing with technology but lacking in substance. If you like Marshall's work, you can connect with his Facebook page.

Ill admit that John Donne isn't everyone's cuppa, and the sonnet form can be a bit daunting—but try not to run away just yet. Here's my intro to John Donne: He was a lady's man who wrote sexy poems about the ladies, and then he became a preacher, and started writing sexy poems about God. Like this one ...

Batter my heart, three-person'd God; for you
As yet but knock; breathe, shine, and seek to mend ;
That I may rise, and stand, o'erthrow me, and bend
Your force, to break, blow, burn, and make me new.
I, like an usurp'd town, to another due,
Labour to admit you, but O, to no end.
Reason, your viceroy in me, me should defend,
But is captived, and proves weak or untrue.
Yet dearly I love you, and would be loved fain,
But am betroth'd unto your enemy;
Divorce me, untie, or break that knot again,
Take me to you, imprison me, for I,
Except you enthrall me, never shall be free,
Nor ever chaste, except you ravish me.

"Why I Won't Be Buying Rogaine" by Scott Poole

Scott Poole's work manages to combine beautiful language with humor and emotionally charged themes to make some of the best contemporary poetry I've encountered outside of the slam scene. If you want to learn more about Poole's work, you can find his Facebook page here.

This poem is one of my favorites, especially when you understand the full context. Here's a snippet to whet your appetite.

I can feel the tug
of the halter at the nape
of her neck, the wind
on her naked front.

It blows her nipples
to amber beads,
it shakes the frail rigging
of her ribs.

You can find the full text and some contextual details here.

"Lazarus of Bethany" by Jesse Parent

I've had the privilege to connect with Salt Lake City poet Jesse Parent on a few occasions. Now, he's getting a bit famous. His poem "To the Boys Who May One Day Date My Daughter" recently went viral—but I'm a bigger fan of his Bible retellings. He's re-worked Judas, and he even wrote a poem written as a letter to the cross, but my favorite is probably his re-telling of the story of Lazarus:

all men...hmmm...not that I disagree...I am not partial to poems by women (except Ai).

This is a great selection.

To the contrary, the fact that poetry doesn't have to rhyme is why it lost favor from me for many years.

And don't kid yourself, free verse is not poetry. Its just a sentence with bad grammar chopped apart to pad it out to look like one.

I'm with Sarah here. Maybe it's that creative writing class I took in high school, but free verse almost always strikes me as a bit... teen angsty.

And of course poetry should still be flexible, that I won't deny. There needs to be a balance, so my brain won't go a fry. Wait a minute, damn it I rhymed. Back to square one.;D

Interesting thoughts.  I like form poetry as well...sure...but poetry is an expression of language innovation...rhyming isn't a necessity for me to feel connected to a piece.

"What Teachers Make" is so accurate it hurts. I love it. He's spot on and that was just a great poem. Two of my favorite poems (I am not a big fan of poetry usually) are "Spelling" by Margaret Atwood and "The Weed" by Elizabeth Bishop.

The Master Plan by Bukowski is the one that changed my mind about poetry:


starving in a Philadelphia winter
trying to be a writer
I wrote and wrote and drank and drank and
drank
and then stopped writing and concentrated on
the drinking.
It was another
art-form.
If you can’t have any luck with one thing you
try another.
Of course, I had been practicing on the
drinking-form
since the age of
15.
and there was much competition
in that field
also.
It was a world full of drunks and writers and
drunk writers.
And so
I became a starving drunk instead of a starving
writer.
The best thing was the instant
result.
And I soon became the biggest and
best drunk in the neighborhood and
maybe the whole
city.
It sure as hell beat sitting around waiting for
those rejection slips from The New Yorker and The
Atlantic Monthly.
Of course, I never really considered quitting the
writing game, I just wanted to give it a
ten year rest
figuring if I got famous too early
I wouldn’t have anything left for the stretch run
like I have now, thank
you,
with the drinking still thrown
in.

Great article! At one time she helped me find interest in studying contemporary poetry.
At that time, it was still difficult for me to find all the necessary sources, so if you are interested in the topic of modern poetry and want to study it - the site http://www.poetsencyclopedia.com/ will be extremely useful for you. It contains the best examples of modern poetry, indicating all the necessary sources.