6 Tips For Cleaning Up Your Dirty Words (Grammatically, Of Course) 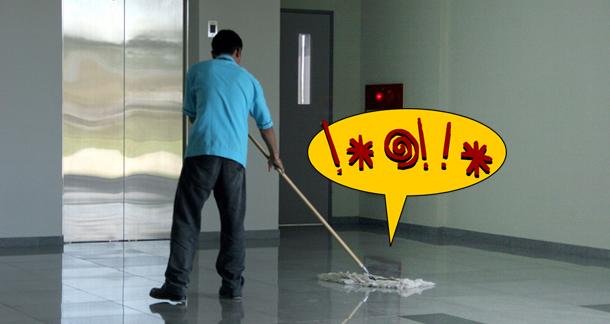 There is an art to profanity that is hard to come by for many writers. As an editor who favors working within genres the other editors can’t stomach, from hardcore erotica to medieval splatterpunk, I really don’t see enough helpful information on the ins and outs of writing with obscenities. You won’t find anything on the many versatile uses of “fuck” in The Chicago Manual of Style or Amy Einsohn’s The Copyeditor’s Handbook.

Some creativity vampires view vulgar language as a sign of weak writing and limited vocabulary. Some see it as an all-too-common device used only for its (now diminishing) shock value, something that can turn off a profitable chunk of potential readers. I recently read a blog by a commercially successful author of CIA suspense called “Why There's No Profanity in My Books” (the read was as thrilling as its title). While the author expresses some rational points involving religion, good manners, and not offending his mother, I found myself wondering why it is perfectly polite to write violence and murder into the plot, but not for the Russian double agent to utter a single shit, let alone a fuck.

For this editor, I say if it fits the genre, obscenities can open up a whole new world of colorful language, especially when you add your own creative flare. Originality aside, a classic, well-placed fuck it can pack the power and pizzazz that no other phrase can, when used wisely.

You don’t want your expletives to be too dirty though. I mean, the fun kind of dirty, yes, but dirty, lousy with grammar and punctuation mistakes? No fuckin’ way. If you are going to swear, go big and go with correct spelling and punctuation. The following is a list of the common errors I see even the most seasoned writers consistently make when it comes to the profane. It’s easy to get tripped up on basic grammatical rules when you are so into the drama of your dialogue that the characters are basically writing their own arguments. Look out for these when you self-edit. I want to help. Because I’m a fucking proper lady when it comes to SPAG.

We’ll warm up with an easy one. Most writers know that when you go to hell in a fast car, you are going to a specific place, yes, but this place is lowercase and not treated as a proper noun. Fiery, indeed, capitalized, no.

Titles like doctor or captain used in direct address are often capitalized, though this is a matter style guides disagree on. However, when that title is something like “sir” or “dickwad,” lowercase is usually the way to go. But as with any craft, there is room for artistic interpretation. Perhaps your character wants to coin a nickname:

Remember that the main purpose of those frustrating-as-fuck hyphens is to aid readability and eliminate ambiguity.

“Thanks for nothing, Mr. Dickweasel" or “Don’t mess with Cassy. She’s the Queen Bitch” is completely acceptable. In certain cases, capitalization can and should be used for creative emphasis.

2. Here’s where you can stick your hyphen

A reliable dictionary is the first place to look when you are wondering whether a compound curse word is hyphenated, closed, or open. Alas, not every phrase gets its own cozy little corner in Merriam-Webster. But don’t let that keep you from checking. Both motherfucker and apeshit are listed in Merriam-Webster as one word (and boy is it fun to click on the pronunciation audio). I see so many writers breaking these up into two words. Asshole is common knowledge, but asshat tends to trip people up. These are also listed in Merriam-Webster, along with cocksucker. All closed with no hyphen.

When a compound modifier like kick-ass comes before a noun, it is typically hyphenated (That's a kick-ass record). A compound verb like "You are going to get a major ass-whooping" should also be hyphenated for clarity. As arbitrary and useless as these details seem, they're necessary to keep your damn dirty writing clean.

According to The Chicago Manual of Style, the trend leans toward closed compounds. Remember that the main purpose of those frustrating-as-fuck hyphens (notice the hyphens in the compound modifier before the noun!) is to aid readability and eliminate ambiguity. If your colorful curse isn’t in a dictionary, make a judgment call and keep a style sheet so you can keep track. Believe me, as amusing as it is to search for different instances of shit-faced and shitfaced within a manuscript and make sure they are all consistent, it only adds more time to the editing bill.

Many writers leave off the apostrophe in fuckin’, but I find it looks cleaner to use it. Fuckin all by its lonesome looks like the writer accidentally left off the g. Same goes for bitchin’, if you’re still using that oldie but goodie. Believe me, I’ve seen stranger.

4. Plural, possessive, and the most goddamn annoying of all, plural possessive

This is just one of those little details that will never fail to get missed in rounds of self-editing before it hits the editor's desk. Apostrophes often have a mind of their own or forget to make an appearance entirely. Especially when your character is being all dramatic and vulgar.

I don’t give two shits. (correct)

I don’t give two shit’s. (never correct, ever)

For fuck’s sake! (Don’t forget the possessive apostrophe, which goes before the s and not after. This expression refers to the sake of one single fuck, and does not typically refer to the sake of several fucks.)

“I swear, Vinnie, I’ll cut off those pricks’ dicks in two seconds flat,” she said, slashing the knife to and fro. (Apostrophe after the s when multiple pricks/dicks are being endangered.)

5. Disappointing your mother further by not only being a fiction writer, but also taking the Lord’s name in vain in your work

God/god damn it vs. goddammit: This is frequently a lowercase swear when it’s all one word. Variant spellings are acceptable, but the double-m spelling is more prevalent than any other form. I often see several versions of this word in a single manuscript. Unless you want your character to pause slightly between each word (God...damn it!), it makes sense to write it as one word.

But goddamn and goddamned are spelled with an n and are usually closed, as we see in Henry Miller’s Tropic of Cancer, reprinted by Grove Press:

“…I mean that I’ll lay myself down on the operating table and I’ll expose my whole guts…every goddamned thing.”

This is not a hard and fast rule, however. Take a look at The Great Gatsby, where the line “The God damned coward!” breaks the term into two words, with “God” capitalized. The style nowadays leans toward the closed spelling with a lowercase g, but style is hella subjective.

Inconsistencies and common misspellings of this offensive expression are often abundant within a single manuscript. Consistency is key.

I disagree with those who would shun profanity as limiting to one’s vocabulary. It is quite the opposite. Sure, you can look up a list of unusual SAT terms in the hopes of impressing readers (because you know how readers abso-fuckin'-lutely love to pause in the middle of a scene and look up words in the dictionary), but don’t forget that there is a whole other world out there. If it is fitting for your characters/tone/audience, use it.

Here are a few of my favorites:

shitheel: He's a real shitheel; as in, he's so low that he's like the heel of a shoe dragging in dog shit. Can be closed or hyphenated, but, if you dare to use it more than once in the same piece, make sure it’s consistently styled!

douche bag: An unattractive or offensive person. Listed in the dictionary as two words.

See? “She is such a raging bitch!” can convey characterization and emotion in a way that “She is execrable!” lacks. Why not use all the tools in your belt? Intelligent vocabulary, and a fuck for good measure, if necessary? Ultimately, it depends on your genre, voice, and characters. Listen to them, and write what they would say.

This had to be the funnest article in the whole world to write.

The words I keep playing around with are fuckly and fuckingly.

"No, she isn't ugly. She's definitely not hot. But definitely fuckly."

"So you mean fuckable."

"No, goddammit. Listen to what I'm saying. She's fuckly. Why the fuck you always have to correct me?"

"Oh, well, thank you for your approval, motherfucker. I'm gonna fuckingly smash your face in  you don't knock it off."

"Yeah, fuckingly. What the fuck is wrong with you, you always gotta repeat what I say?"

This is good. Thanks. I appreciated the funny and the forthright. What is SPAG? I looked for it in context, but couldn't figure it out.

I think Spelling, Punctuation, And Grammar (SPAG), but I could be wrong.

Lovely article and surprisingly helpful. That said, I followed the link and ... damn, you're right, reading that article was "as thrilling as its title."

I hate that I went to that site. I feel filthy just having read those words. Thanks Gingermutt, and thank you Holly. I'm ruined.

Now I have to write a story based on those rules, build a plot where said rules disintegrate, have that person finally curse, nay, not just curse, but curse god!, and then no one gives a shit because they're busy being offended by wars and rapes and the genital mutilation of women and honor killings.