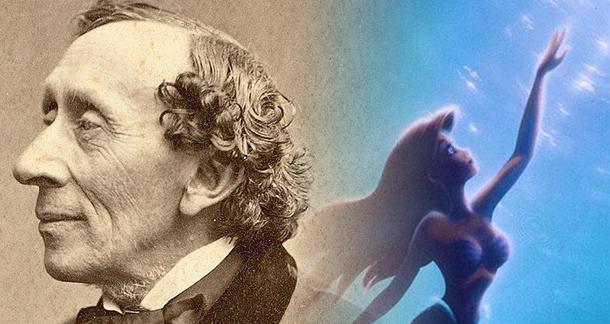 For a man who wrote some of the most lasting stories in history, Hans Christian Andersen is never venerated like Charles Dickens, Mark Twain, or Ernest Hemingway. Indeed, his fairy tales precede him and Andersen himself is much shrouded in mystery. As Daniel Mallory Ortberg writes in The Toast, “The first story he ever wrote was about a candle that did not feel appreciated, which is fairly representative of his output over the course of a lifetime.”

Yet Andersen is a giant in our society’s collective consciousness, and we really should be celebrating him — especially since he was born 214 years ago today. So here are 6 reasons why we should raise a toast to one of our greatest fairy tale writers ever.

1. He was insanely prolific

Sure, we all recognize his more famous fairy tales, right? The ones that have transcended the boundaries of literature and become a part of Western cultural conscience. (By the way, raise your hand if you don’t know “The Snow Queen,” “The Little Mermaid,” “The Ugly Duckling,” “The Emperor’s New Clothes,” “The Tin Soldier,” or “The Little Match Girl.” If your hand is up, stop reading this post right now and head right HERE to peruse them to your heart’s delight.)

However, what you might not know is Hans Christian Andersen wrote far more than just those five piece. In fact, he wrote approximately 3300 works throughout his lifetime, from poems to short stories. Since he died when he was 70, that comes out to 47 pieces produced a year — from birth to death! Needless to say, Andersen is a good example for any writer who’s struggling with writer’s block.

2. He was an accomplished travel writer

Though his fairy tales were what made him a literary sensation, Andersen was actually a huge traveler — and a gifted travel writer — in his own right. He began traveling Europe in the early 1830s; by 1833, the travel bug had deeply struck him, if the letter in which he wrote to a friend is any evidence:

“I am convinced that unless I am torn away from my momentary surroundings, I will amount to nothing; I shall perish if I remain here.”

Indeed, his 1835 novel, The Improvisatore, was based on his travels in Italy, particularly Rome and Naples, and was the book that introduced the Blue Grotto at Capri to the public.

To no-one’s surprise, his travel writing is chatty, colloquial, and as accessible as his fairy tales. If you’d like to check out some of these travelogues, try Shadow Pictures of a Journey to the Harz, Swiss Saxony, and A Poet’s Bazaar.

3. He was once unceremoniously booted out of Charles Dickens’ house

Andersen was a terrible house guest, prone to collapsing on Dickens’ lawn and weeping, which I think just goes to show that no one’s perfect.

Hans Christian Andersens’ fairy tales are so timeless that, when you think of him, you might think of someone who lived long, long ago. However, he was made of more recent stuff than you might have thought: his contemporaries were Victor Hugo, Louisa May Alcott, Wilkie Collins, and, famously, Charles Dickens.

In fact, Andersen struck up a short-lived and ill-fated friendship with Dickens in the mid-1850s, having met him at a party hosted by the Countess of Blessington. Around ten years later, Anderson invited himself over to Dickens’ family home for a “short” summer visit. He ended up staying for a full month and was eventually asked to leave. Unsurprisingly, the relationship between the two famous writers suffered because of it. But Dickens’ letters to friends show that his exasperation was perhaps well-founded: Andersen was a terrible house guest, prone to collapsing on Dickens’ lawn and weeping, which I think just goes to show that no one’s perfect.

4. He persisted despite initial unpopularity

Andersen was a relatively late bloomer (a bit like the protagonist in his fairy tale, “The Ugly Duckling,” which many speculate may have been based off of himself). Having started writing his fairy tales in his 30s, they nevertheless did not sell well in the beginning, as parents and children alike ignored his works. It would take a decade for him to gain a foothold in the public consciousness and fully experience success in his lifetime.

All of this to say: take heart, writers. If Andersen had quit the writing trade after a year of disappointment, we would never have been able to enjoy his ageless classics today. So, even if your books aren’t selling, you never know what will happen if you keep working at it.

5. He wrote despite potential dyslexia

Though Andersen didn’t like school (even that might be an understatement of his hatred — he once mentioned that his schooling days were the “darkest and most bitter of his life”), it might have been for a good reason: it’s possible that he was dyslexic. The writing that Andersen produced in his later years was so famously dotted with elementary spelling and grammar mistakes that it has long been speculated by critics that this was due to a long-standing struggle with dyslexia.

Recently, however, scholarship has rebutted this conjecture. In a 2000 issue of the Journal of Learning Disabilities, a study asserted that Andersen wasn’t dyslexic, saying: “A structural analysis of Andersen’s spelling errors show that they are mainly phonologically plausible from ages 11 to 70, and that the proportions of plausible and implausible errors match those of normal achievers, but not those of individuals with dyslexia.”

So if he had dyslexia? Then he was a man who overcame disability to give us some of the most treasured fairy tales of all time. And if he didn’t, well, he certainly showed great strength of mind when it came to ignoring and plowing right through all those typos. It’s inspiring whichever way you choose to look at it.

6. He wasn’t afraid of unhappy endings

Last but not least, Andersen’s endings weren’t as gruesome as the Grimm brothers’ infamously twisted finales, but he definitely didn’t shy away from unhappy ones. The Little Mermaid ended with the little mermaid having to choose between dissolving into sea foam or killing her love interest. (Spoiler: she dissolves into sea foam.) The little match girl freezes to death on Christmas Eve and the tin solder melts into a lump in the stove. Cheery, these were not.

In short, I’ll let Andersen have the last word: “Enjoy life. There's plenty of time to be dead.”