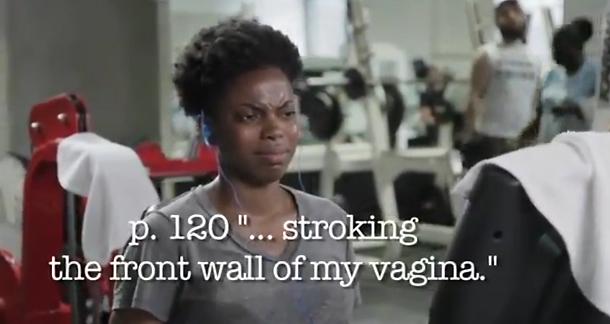 So, before I get started, I want all of us to have a Good Will Hunting moment. I want all of you to take your tablet, or smartphone, or laptop, or whatever the fuck you're reading this on, and I want you to go and take a good long look at yourself in the mirror. The next thing I want you to do is imagine the person staring back at you isn’t you, but a middle-age, overly hairy comedian playing the part of a court ordered therapist. Next, I want you to look deep into the hard steel grey eyes of said imaginary therapist and let yourself say:

Buy her a copy of Under The Roofs of Paris or Tropic of Cancer by Henry Miller. Both are the very definition of sleaze and perversion but are, in the very least, extremely well written pieces of pornography.

I want you to keep saying it, or some variation of it, until you’re a puddle of naked emotion, curled into a fetal position on the bathroom tile, arms wrapped around yourself, crying, letting all that bad, nasty stuff out of your system; all those feelings of inadequacy, of not understanding why your wife is getting so hot from a book.

That's right, let it all out, big guy.

Sure, you don't mind the fringe benefits that go along with her reading that book, but isn't getting her off your job?

Because now it's time to knock off the shit and take responsibility for what you've done: You're the reason she's reading Fifty Shades of Grey.

Wipe that look of shock off your face, dildo, because you know it's true. You know a book is a better piece of ass than you are. And you know what, pal? It’s okay. It’s okay because that means that maybe your mother raised you right. She raised you to be a good man who respects women, which in turn made you become an attentive lover… Okay, stop laughing, we all know that’s a crock of shit. Men for the most part are sub-normal droolers when it comes to the sexual whims of their wives and girlfriends. Sure, a few times a year you can wind yourself up, get in a “romantic” mode and maybe you’re able to get her off.

But for the most part, all of us are nothing more than insert PEG A into SLOT 1 and pound away until PEG A is asleep and hogging the blankets. (Yeah, I know that’s a stereotype, but guess what, stereotypes exist for a reason.) But seriously, how can you get your significant other to prefer you to this:

Christian squirts baby oil onto his hand and then rubs my behind with careful tenderness — from makeup remover to soothing balm for a spanked ass, who would have thought it was such a versatile liquid.

(BTW, this is after the Christian dude spanks the Ana chicks ass baboon butt red.)

No, seriously, she won’t.

So, what else can you do? Maybe you can actually read the books? Maybe you can find out what about them is getting her so hot and bothered? I mean, if you’re here on LitReator, there’s a better chance than not you’re a heavy reader, and maybe good old Fifty Shades can give you a few pointers?

Let’s face it, you’re not going to read these books. I couldn’t even make it through the first book and I pride myself on finishing whatever book I start—but the whole thing was just too goddamn ridiculous. And this—the ridiculous factor—is, honestly, what attracts women to the type of story Fifty Shades of Grey is: It’s a romance novel, pure and simple. Ten years ago, this little trilogy would’ve been parked in the romance section of every drug store in America, but instead of having Fabio dressed as a pirate and cradling a damsel on the cover the artist would’ve painted him in a black leather submissive mask and a dog collar, and have him tweaking the damsel’s nipples with a couple of clothes pins. But, because of the tasteful, ambiguous covers, these books are at the front of every B&N in the country and no one’s embarrassed to be seen with them.

So what’s my real purpose behind this little letter? Well, first and foremost, I’m here to stop the further spread of romance novels masquerading as erotica, and secondly, I’m here to encourage you to elevate the level of literary sleaze in your household. Yes, gentleman, we need to stop Fifty Shades of Grey.

So what I want you to do next time you’re in the bookstore with your wife or girlfriend and you see her pick up a copy of Fifty Shades of Grey, I want you to rush over to her, take the book out of her hand, and go and lead her over to the literature section and I want you to buy her a copy of Under The Roofs of Paris or Tropic of Cancer by Henry Miller. Both are the very definition of sleaze and perversion but are, in the very least, extremely well written pieces of pornography. And if those two books don’t get her worked up, and she insists on picking up the Fifty Shades of Grey trilogy, the only weapon you’re going to have left to combat her ability to read and enjoy those books is to make her watch this little video, so that every time she opens one of the books, all she can hear is Gilbert Godfrey reading it to her.

As far as making your love life better-- fuck if I know. Why don't you try buying your wife some flowers and getting yourself some Viagra.

Chris Johnson from Burlington NC is reading The Proud Highway September 21, 2012 - 10:33am

Henry Miller is a great suggestion. Besides being the Godfather of Smut (the capitals are official), he was a stellar writer. I dig Miller, not for the casual sex, but for the wild flights of stream of consciousness he uses to go crazy. It's almost a kind of zen experience, getting caught in one of his brilliant paragraphs. It's stream of consciousness only by the virtue that it seems he put everything he thought of sequentially on the page. Great stuff.

Sorry to be wildly off the subject. I got more turned on when Bukowski described losing his virginity to a 300 pound woman. At least he used talent and not menopause.

Joshua Chaplinsky from New York is reading a lot more during the quarantine September 21, 2012 - 3:35pm

Funny stuff, Keith. Every time someone mentions Miller, I can't help but think of that scene with Robert DeNiro and Juliette Lewis in Cape Fear. Creey.

I just gave myself an unpleasent tug-job to Gilbert Gottfried.

OMG...not ever going to even think about those two combos ever again.

Haven't read the book, but that video is hilarious!

Dino Parenti from Los Angeles is reading Everything He Gets His Hands On September 23, 2012 - 2:21pm

This would actually be the only way I'd read this book or any of its series: if Gilbert actually read them all as full books on tape. Then I'd happily download and laugh my ass off over a series of well-deserved road-trips.

Seriously, I've been telling my BF to tell his work friends (who are all mistakenly excited that their wives and girlfriends are hot and bothered over FSOG)that they have done something very wrong in the sex department. I don't think he did, because that would probably be awkward. But I've noticed that many of these women also add "I don't usually read books but..." when they rave over FSOG. Just saying, maybe a connection, maybe not.

Every time I picture younger DeNiro with a teenage girl, it's "That guy Sport, he called ya lil chicky" or "You're the one that's lame, man."