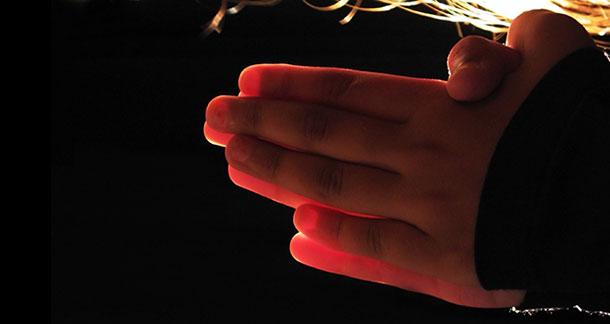 In this season of harvest, bounty, and gratitude, let us take a few moments to thank the bread and butter of our profession: words. They sustain us in times of deep anxiety; they’re our best friends, especially when other humans become intolerable. Here are five words I’m particularly thankful for — in no particular order — because they’re either especially vital or oddly funny sounding. Or both.

If we were in Iran, we would face an unimaginable horror. I’m not talking about being hanged or thrown into prison or having our hands chopped off at the wrists or any other wacky physical punishment Sharia law commands writers to suffer when we stray from current politicoreligious dogma. I’m talking about the lack of a definite article. Farsi doesn’t have one. There is no the in Farsi.

Farsi speakers can say or write one book or that book (yug kitob and u kitob, respectively), but they cannot express the book because the language does not permit it. That’s, well, farcical.

We English speakers (and French, German, Italian, and so on down the European line) take the for granted, but consider how barren and inflexible our prose would be without it. “One dog bit me.” Which dog? “That dog.” But I don’t see a dog. “Well, that dog you own – that dog you trained to bite guests.” Oh, that dog! “Yes, that dog.” Phew! All toward conveying the elegant specificity of the.

We English speakers take 'the' for granted, but consider how barren and inflexible our prose would be without it.

There’s a camaraderie implied by with that the more cursory and doesn’t convey. With is dramatic in its grace. And is utilitarian; with is harmonious. Come with me to the Kasbah! How much more intimate is the emotion this invitation summons than “You and I can go to the Kasbah.” The latter is drab and perfunctory; the former is thrillingly romantic. I frankly don’t know what or where the Kasbah is, but if a handsome stranger asked me to go there with him, I’d be out the door in a flash.

A few languages – Hungarian, Ossetic – yes, that’s Ossetic, the language of the Persian Ossetes – handle with as a case. This generally proves difficult for English speakers to comprehend. In Hungarian, if you want to join two things or people in a common activity, you must express it by altering the verb to its proper case – in this case (get it?) the sociative case. What fuss and bother. Give me with or give me death!

I don’t mean the activity, though that’s obviously compelling in its own right, but the word itself. Fuck. It’s blunt, harsh, and brutal. Fuck is nasty and abrupt. It sounds dirty. It serves us well in times of disaster. You drop the garbage all over the floor. Fuck!  Your story gets rejected by a second-class journal. Fuck! The Tea Party. Fuck!

Fuck accommodates the personal touch. Where would we be without fuck you!? It scans well, simple though it may be: it’s a spondee of enormous expressivity – two quick stresses, like a double jab to the jaw. And then there’s the related fuck me!, less popular by far, but no less dramatic. That one’s a trochee – a stress followed by an absence of stress. We use it to indicate shock, especially in times of personal harassment.

Yes, one might argue that fuck suffers from overuse, but we use it so often because of its unique blend of sound and meaning. There really is nothing else in the English language quite like a good hard fuck.

Here’s one of my all-time favorites, a word so common that we don’t notice how ridiculous it sounds. Say people 10 times at normal speed, and it loses all meaning and becomes a comedy routine. The peep gets the word going on an idiotic note (it’s nearly impossible to say marshmallow peeps without cracking a smile), only to be followed by the thudding ul, which draws the word to a close as a downer.

Remarkably, we use this inane-sounding word to describe the community of human beings with whom we share the planet. The people. It’s absurd. People has no dignity, no euphonic honor. It’s for this reason that Louis XI, the Basil Rathbone character in the Preston Sturges-scripted If I Were King (1938), responds to his courtier’s alarmed statement, “The people are revolting!” with confusion. “The people?” he asks, dumbfounded. He simply doesn’t understand to whom the courtier is referring. After a few moments of reflection, he gets it: “Oh, you mean the (dismissive wave of the hand) people.” It’s not only the monarch against the riff-raff. The word itself sounds too ridiculous for him to take seriously.

I’m sorry, ladies, but the word that describes you sounds silly enough to make my top five. I mean no political or moral disrespect with this observation. I mean only that the word women rings an amusing note. I don’t have to go all the way to the vegan organic lesbian-separatist wymyn to make jokes, though that digression is always good for a few laughs, especially among penis possessors. No, women sounds ludicrous enough quite on its own.

Wikipedia solemnly informs us that women does not evolve, as the popular misconception has it, from the roots womb and man. Instead, it comes from the Old English wifmann, which meant female human. No, mann was not Old English for man. A male human was referenced by the word wer (to rhyme appropriately enough with beer). Only after the Norman invasion in 1066 did mann came to be used solely to describe a male human. Wifmann became wimann became wumann became woman. As Wikipedia puts it, “the medial labial consonants f and m in wīfmann coalesced into the modern form woman." (Get your minds out of the gutter. It’s a linguistic term.) One assumes that the plural of wumann took the same route as the plural of man.

Why is wymyn – I’m sorry, women – funny while man is not? (That’s for those of us who do find it funny. For those who do not find it funny, this entire entry will be incomprehensible and offensive. Please accept my half-apology.) I say it’s because the first syllable sounds like whim  - a caprice, an impulse – with its accompanying felicitous and musical sound. It’s then compounded by the second syllable’s rhyming min.

The people fuck with women. Or: People, fuck with the women.

The women fuck with people. Or: Women, fuck with the people.

But that’s syntax, a whole other linguistic category for which to be grateful.

What are your favorite words? Have I been sufficiently offensive? Let us know your thoughts and objections.

Finnish has no "the" either, by virtue of it not being of the same roots as other European languages. Words are modified depending on how they work within the sentence.

Menen ravintolaan syömään, "I go [to the] restaurant to eat"

In both cases, omena ("apple") and restaurant ("ravintola") are modified instead of using a preposition whilst nouns do not require an article. For emphasis, case modification is used. "Omenan" rather than just omena (or "omenaa", partitative) states that the entire or the specific apple is eaten.

edsikov from New York by way of Natrona Hts PA is reading absolutely nothing November 28, 2013 - 2:46pm

Funny you mention Finnish - I was an exchange student there one summer many, many years ago. The family I stayed with told me that I had no chance of learning any Finnish over the course of the summer, and they were right. I just couldn't get the hang of those cases!

Being an agglutinative Ural-Altaic language, Mongolian is guilty of the first two entries: the and with.

But of course not in the sense that we can't express these things. For example if I was bitten by my friend's dog, which was trained to bite at the guests' calves, I'd say the following:

And he would perfectly understand me. But I digress. We have a word "нөгөө" to compensate for the word the and also whatever the word that follows as well.

It's hard to be directly translated as the, because it can atc like a pronoun to a pronoun as well.

And I digress again. But It's an insightful article, and I thank you for sharing your polyglottal wisdom.

edsikov from New York by way of Natrona Hts PA is reading absolutely nothing November 29, 2013 - 10:18am

Mongolian, eh? Well then how do you say "the yak butter has turned rancid?"

Answer: It's always rancid, so there's no need to make the observation.

But I think people should associate Mongolia less with yaks, and more with "ger"-s and horses. :)