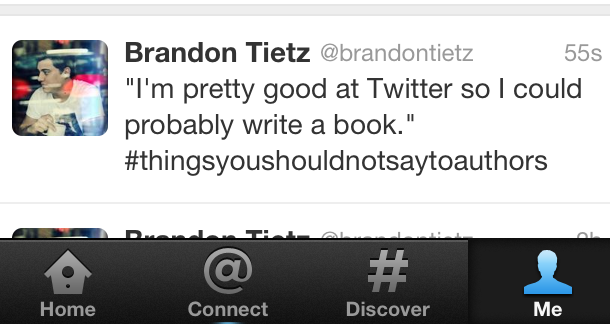 When I released my first novel back in 2008, I noticed a definitive shift in my conversations, now that I had gone from aspiring writer to published author. Having a book out was considered cool...certainly cooler than some office job or taking customer service calls. To write and publish a book was viewed as an accomplishment, so naturally, there were some instances in which said accomplishment was coveted by others...some even going as far as to trivialize it. You know what I'm talking about if you've ever seen some NFL receiver drop a pass and your out-of-shape dad yelled at the TV, "I coulda caught that!!" Authors deal with that too.

The following are five conversational excerpts I've heard over the years, and I've heard them all more than once.

“You should write a book about me.”

Ugh! Good Lord, this one crops up the most...and I’m practically always let down by the following diatribe of relationship-turned-sour, “whoops” babies, and the hooked on drinks and drugs narrative. Look, I get it, you went through some shit. Life wasn’t easy—but guess what—you’re not the first person to survive a nasty divorce or get cheated on. Most people have suffered a dark period. No need to waste 60,000 words on the story we’ve all heard before. Tackling a novel is one of the single-most exhausting creative endeavors you can take on: it takes months to do and a “won’t quit” mentality to do it. What I’m saying is that it’s a lot of work. So unless you’re a celebrity or you’ve undergone a truly unique experience such as cutting off your own arm because it was trapped under rocks, well, I’m afraid the best person to write a book about you is you. If you’re truly passionate about your story, you shouldn’t need someone else to write it for you.

If you’re truly passionate about your story, you shouldn’t need someone else to write it for you.

“I’m working on a book but can’t seem to get motivated.”

Repeat after me: “There are no cheerleaders in publishing.” No one is going to sit next to you at the computer and coax you to produce words. This is a lonely process in which encouragement is minimal. If you don’t have the drive—sorry—but there’s nothing I can say to give it to you. A lack of motivation means one of two things: you’re either lazy or there’s other things you’d rather be doing. No shame in either. I’d be lying if I didn’t admit there were a few Saturday nights I’d rather be out than behind my keyboard, and a fair few times I indulged. The need brings me back though. The need made me write for six years without making a dime off it. If you don’t have that need then you might reconsider writing altogether. If you read this and it only strengthened your resolve, congratulations, you have what it takes.

“I’m pretty good at Twitter so I could probably write a book.”

That’s like me saying, “I’m pretty good at air hockey so I could probably make it in the NHL.” See how fucking dumb that sounds? No? Let’s try another: “I’m pretty good at Call of Duty so I could probably make it in the armed forces.” You with me yet? You see how one doesn’t equate with the other? If you did, you’d know never to equate your Twitter feed with writing a novel. Now, is being a proficient tweeter a useful tool in the promotion of one’s work? Oh, absolutely yes! But Twitter writing and novel writing are two completely different animals. In fact, some of the best novelists I know have terrible Twitter feeds…not engaging and boring as all hell. As I’ve said, writing a novel is difficult; don’t trivialize it by comparing it to something Amanda Bynes does in between psychotic episodes. She’s really good at Twitter, by the way.

“I read a lot of books so I could probably write one.”

Wrong, comrade! Yet again, we’re back in “I’ve played a lot of video games so I could probably design one” territory. Let’s break this shit down. Reading: absorption. Writing: creation. The flow of information between reading and writing are actually going in different directions. Don’t get me wrong, reading books is important if you want to do this. Authors always say that to aspiring writers: “Read a lot.” It’s how you learn the difference between well-developed characters and two-dimensional ones. It’s compelling story-telling vs. trite bullshit. Reading is always going to serve as your training wheels on the path to discovering how a well-crafted novel is put together. I appreciate a voracious reader as much as the next guy. All writers do. But to equate the act of consumption with creation doesn’t jive. If reading twenty bestsellers was all it took to produce one—hell—myself and most of my friends would be rich by now. Sadly, that’s not the case.

Call me when you're done and we'll see if you feel the same.

6. My wife loves your book

People who get flustered by "What's your book about?" either shouldn't be writing books or they write experimental stuff for a limited audience.

8. I could have written this book. (more like something in a review rather than something a person says to an author)

My favorite is, "You're a writer?! I have this great idea for a book about X where Y and Z happen, and it's going to incorporate LMNOP... I'm going to write it when I retire/when I get done with my military tour/when the kids are finally in school/some other time that isn't now."

9. You know...I've always thought about writing a book. (Everyone has.)

12. Since my draft sounds like your book, can you put in a good word for me with your agent?

After self-publishing my first novel (and therefore watching a virtual flat-line sales trend), my personal favourite piss-on-my-campfire snippet (which I've now heard at least a dozen times) is, upon knowing that I'm self-pubbed and hearing that I've made a sale or two, asking the immortal question "Was it someone you know who bought it?" It's those kind of confidence-boosting, shots-in-the-arm that keep me going through miserable nights of self-doubt inspired imagination drought.

13.  Can't you just self-publish now? (Or if one IS self-published: so you're not REALLY published?)

14. Aren't you afraid that agent/critique partner/postal worker is going to steal your work and publish it under their name?

15. My sister/cousin/babysitter wrote a book, you should read it. It's about {insert furthest thing from your interests here}.

16. I have some poetry! Will you read it? (Hands you moleskin notebook)

17. So, is the main character based on you, and is this book based on personal experience?

Yeah, 'cause the insistent shit in my head that needs to come out is less urgent than your lame, hackneyed wrong-man idea.

@Brandon: I laughed my ass off when I read your #1 because I got that just the other day.

"Was it someone you know who bought it?"

I've said that to musicians talking about their bandcamp pages, right after "Do you actually sell any?"

Unless you're already on some sort of mutually-interested terms with someone, the chances are they don't care much about your 'creative' endeavors. Maybe talking about it can lead into a real conversation, if there happens to be that click, but most often it is back-and-forth wrestling over topic-control. Four out of the five examples in the article switch the topic away from the author and his book to the speaker.

Here's another Amazon review-y thing: "Everyone who gave this book a positive review must be friends with the author."

7a) So, it's just like <insert name of book you wouldn't be seen dead reading, let alone aspire to writing>

I always hear the mantra: "If it doesn't make you money, don't do it."

Or: "You based that character(s) off of me!"

"I have a fantastic idea for a book! Let me tell it to you, and then you do the actual writing! And then we'll split the money 50-50."

"Is that real published?"

"Maybe, if you're too good to be meeting the public, you should stay in your writing cave and cash your royalty checks."

If you're old enough to sign a writing contract, you should have developed  people skills that allow you to deal with the public. Anyone in the business of selling things gets asked stupid questions all the time. A writer worth their salt will or should have some sock answers prepared for such things.

LOL, this one cracked me up.

I wouldn't necessarily ask these questions if i meet Stephen King or Jonathan Franzer, but what should you say to authors?

And it feels like some of the questions on the comments and article list are harmless. I hope I can grow thick skin and answer them when I can confidently call myself a writer.

Tony McMillen from Mostly glorious Tucson Arizona but now I live near Boston. is reading Not, I'm writing September 25, 2014 - 8:28am

Elizabeth Dearborn, TOTALLY. I hear that junk all the time. "I got this swell idea for a novel howzabout you doing all the grunt work and I just do the fun stuff like think of the concept and charcters etc? Partners?"

I believe you shouldn't say to authors that nobody will read their writing. It's not only rude but just not true. There are tons of websites where you can publish your research paper like https://paperwriter.com/research-paper-writer and people will read them and give feedback. Don't discourage authors to make what they love doing. 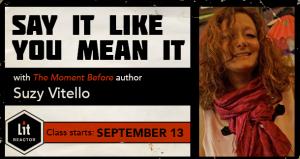