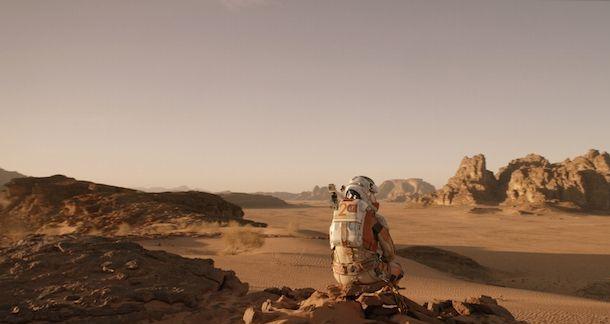 On October 2,  Ridley Scott’s adaptation of Andy Weir’s The Martian will hit the big screen. The book was wildly successful, but will the movie follow suit? It depends in large part on how the movie chooses to adapt the source material. As a sort of scorecard, I present the following list of things the movie will need to truly do the book justice.

He’s the main character of the novel so of course he’s going to be in the movie, but he needs to be as likable as he is in the book. The book depends on us liking Mark pretty much immediately. Sure, it helps that he starts off in a terrible situation and we feel for him, but his voice is what establishes the connection with the reader, and that’s what needs to come across in the film. We need to be personally invested in Mark’s situation, in his fears and his triumphs, for the movie to truly succeed. This will largely be accomplished with voiceover, I’m sure, but will that be enough? And will Matt Damon be able to give us that same likability? What will help with this is...

The book depends on us liking Mark pretty much immediately... his voice is what establishes the connection with the reader, and that’s what needs to come across in the film.

Some really scary things happen in The Martian. Maybe it’s just me, but the thought of a man alone on a barren planet filled me with a kind of existential dread. Thankfully, the scariness and tension is balanced by a healthy dose of humor. Any good tragedy needs some comedy and The Martian has that, mostly handled by Mark Watney’s amusing observations and his snarkiness. I found myself laughing out loud several times while reading the book. Humor is integral to the experience. The film should make us laugh as well.

What makes The Martian great science fiction is that it involves a lot of science. In fact, Mark solves most of his problems using science — from how to grow potatoes to how to generate water to how to power the various machines he is dependent on. Math, chemistry, physics, botany — all feature heavily in the text. How well this will work in the film will depend on how it’s translated for the screen. Again, I’m guessing voiceover. Hell, I’d even flash some calculations and equations on the screen just to shorthand things. I’ll be honest — some of the science in the book went over my head, but I really hope they don’t dumb it down for the average movie viewer.

If there’s one thing the book doesn’t do, it’s delve too deeply into the sweeping vistas of the Martian landscape. They’re mentioned, sure, but the focus is more on Mark’s world and his problems, and in that context it’s understandable. But here’s where the difference in medium demands a slight shift. Showing us the utter vastness of the Martian landscape, and the desolation there, would help to hammer home Mark’s predicament. I generally prefer my imagination 9 out of 10 times (or more), but in this case, seeing as Mars is a little foreign to my experience, I think visuals would have a bigger impact on me.

Bear with me. Early on in the book, as Mark Watney is trying to kill some time, alone on Mars, he borrows some of his absent crewmates’ belongings. The first of these is a collection of music from the mission leader. It’s all disco. Later it’s videos of Three’s Company and then The Six Million Dollar Man. You might think that these are just little colorful moments in the novel, to break up all of the science and expeditions and experiments. I would argue that these are much needed human moments in the novel. Mark is likable, sure, and the science is interesting, but it’s him watching Three’s Company or reading Agatha Christie that helps hammer home that he’s a person, all alone, trying desperately to connect with something. Anything. The idea of him picking through his absent colleagues’ belongings to find some entertainment is both tragic and poignant ,and these moments, in my opinion, not only help show that, but add to the humor.

That’s my list. Does it match yours? Feel free to suggest your own necessary elements in the comments below.

I agree with you on all counts - even the disco.  I understand why it is there in the book and should be there in the movie.  The only thing is that it is hard to believe that he was limited to disco and Three's Company what, 20-30 years in the future, when today if I went to Mars I'd have season upon season, movie upon movie and book upon book of entertainment material in my iPad/Kindle.  It is super nit-picky but I thought this when reading the book as well.  Maybe just throw one line in like "shit, of all the things to be completely and utterly destroyed, my tablet interface.  Of course Lewis left her's behind.  Probably looking for me..."