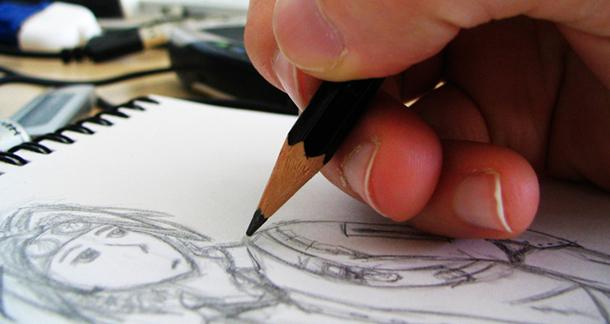 What drives a story? It would be pleasant if a single right answer existed, but I fear the truth is complicated. A story can be driven forward by many things—by characters or ideas, by plot or language. While some of us may prefer a given central aspect (I myself prefer character-driven stories), there's no doubt that many options can be used.

A Word on Change

Before we get into the solutions, let's re-visit the most tried and true piece of advice when it comes to character arcs. A compelling character arc is based on one simple thing: Change. It's change that makes a character dynamic rather than static, and fascinating rather than frustrating. Without change, a character stops being a character at all and starts being a set piece for your story. A few set pieces in your story will be fine (developing every minor character would likely be more distracting than worthwhile), but for your central characters, change is vital.

Change isn't the only element worth noting when it comes to the craft of character. However, it's what we have space to cover here. Every piece of advice in this article focuses in on a specific type of change a character can experience. Not all are necessary for a given story, but at least one is likely to be useful if your character arcs currently ring hollow.

This may be the most substantial form of change a character can experience. Regardless of their goals or gifts, a character's greatest demon may be a lie they believe about the world. What must your character acknowledge about themselves prior to gaining the strength to be victorious? What must they accept about the world prior to overcoming their great struggle? What values must they claim to truly take on the role they're destined for?

Of course, a shift in worldviews need not be heroic. In a tragic story, a character may come to abandon a nurturing belief in favor of one that injures them. Either positive or negative shifts are possible here, and either will prove more compelling than a stagnant view about the world and how it works.

The most interesting characters have many motivations. This reality became especially clear to me when, in a recent conversation, some of my friends and I were discussing why Zuko's character arc in Avatar: The Last Airbender (the show, not the movie) is as or more compelling than that of the main character (Aang). One of our many conclusions was that Aang has clear, unconflicting, and unchanging motivations. Zuko, on the other hand, has varied motivations that often come into conflict with one another.

With this form of character arc, your story's plot can often serve to bring these conflicting motives into stark contrast—and force the character to choose what matters more to them. These choices and the changes they inevitably bring can make for a far more complex, morally gray, and interesting character.

While there are many factors that can make or break a character's likeability, one of note is proactivity. When faced with a daunting situation, is the character proactive in seeking a solution? Or passive, allowing the events of the story to happen to them? If a character starts as passive, do they eventually learn to be proactive? A character who starts their heroic journey with resistance and trepidation can be interesting, but if they stay that way, it's likely to dampen their character arc.

This is the issue with character arcs like that of Bella in the Twilight series. Bella changes in a variety of ways, but ultimately remains passive from start to finish. She is the object around which the story revolves. Conversely, a character like Bilbo Baggins in The Hobbit may begin as passive and even resistant, but the character arc gains oomph when Bilbo decide to become an active participant in—and even instigator of certain elements of—the story.

When we, as readers, get the chance to witness your character struggling to develop new skills and then face down difficult situations with those skills, the victories feel far more earned. There are countless examples of stories that let us see these skills being developed and then deployed—from Star Wars to Kingkiller Chronicles to Last Samurai and well beyond.

What is your character's social role? Does it fit them? Must they come to a new conception of who they are, what they stand for, and how they relate to others before they can achieve victory? Or perhaps your character is losing faith in their identity and must either reclaim that faith or find a new role in life.

The pain and struggle of a shifting identity are easy to relate to. Each of us must go through many changes in our lives, abandoning old dreams and roles as we try to build a life that feels right and good. And beyond being relatable, it's simply true that a character who starts as a white knight and ends as a white knight is far less compelling than a character who starts as a pickpocket but ends as a priest.

Earned comptence was the one issue I had with The Martian.  I enjoyed it overall, but what got to me was: of all the shit Mars threw at Mark Whatney, not only did he figure it out within a rather short number of pages, but it was executed with damn-near perfection (and in cases where this couldn't be done due to natural limitations, he always got lucky).  Granted, the way in which he overcame his obstacles was really fascinating, but he was more like a superhero with his sidekick Science.  I mean, I know he's basically the world's leading botanist/engingeer, but the man made almost zero human errors (except for that one thing, which I won't say, because spoilers, but even that was a semi-freak accident).