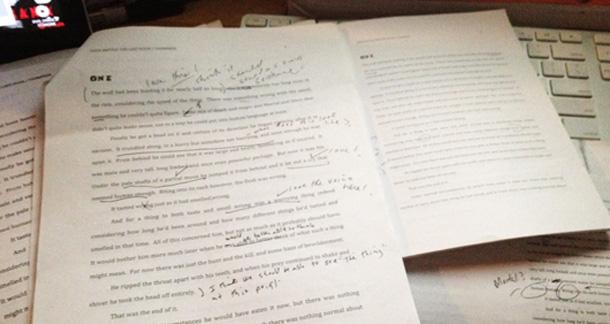 Yes, a good writing group can save you and in more ways than one.

But in early 2008 I had been in New York for more than two and a half years, and though I had been writing a lot of things (mostly a blog and a comic strip), I had also been struggling to turn my first novel into something that actually worked, and more importantly, something saleable. I had been working on it in some form or another since 2004, and though I’d gotten to “the end” in 2007 (too long!), it was only to realize it needed a complete overhaul.

But I didn’t really know how to approach that overhaul. I was just pecking at it. Making a few changes here, a couple there, not really the sea change I knew the book needed. I had shared it with a few friends and family, and they did their best to help, but generally I was too sensitive and they were too nice, and so the notes weren’t exactly revolutionary. Most importantly though, those readers weren’t writers.

Writing and “being a writer” is a frequently painful and protracted journey filled with epic highs and abysmal lows. And if you’re lucky enough to find the right writing group...the best thing about being in that group will be having friends that "get it."

After much encouragement from my boyfriend (read: endless pressure and harassment) I went looking for a writing group (on Craigslist of all places). I found one almost immediately. It was January — the time of trying new things! — so perhaps that explains my luck in finding one right out of the gate.

I went to my first session in January of 2008. We started out as a group of five, four women and one man, all with a variety of backgrounds and writing interests, as well as some variation in experience. We met every two weeks in a public space and did critiques of each other’s work. We began mostly with short stories and the occasional article or essay, but also some novel excerpts, and pretty soon, moved on to full novels. Though there has been a little bit of reorganization over the years, three of the original members make up the current group of four which has been together since early 2009. Amazing to realize that our foursome has been together for nearly five years!

Immediately the benefits of the writing group were evident:

I now had a group of ACTUAL writers, who were interested in and committed to writing, as well as reading my work and giving me critical/constructive feedback. I basically had a TEAM of people I could count on to look at my work! No more guilt over asking friends or family to help out and stressing about the process. It can be incredibly valuable to have readers of your work from all walks of life, but there’s nothing quite like getting a crit from another writer. They know so much going in about how it all works and they are the best at spotting your weaknesses. I also find that they're the best at being both gentle and honest, simply because they get it in a way that non-writers don't.

Being in the writing group kept me on task as we cycled our submissions. It worked out that just about every month you had to submit something to the group for critique. Nobody was going to vote you off the island if you missed a submission or two, but there was an absolute understanding (without it even being said) that we each needed to be devoted enough to the group that we got our submissions in and offered full and comprehensive critiques of each other’s work. It was also a point of pride, I think. Everyone wants to be the best, and nobody wants to be the guy that misses deadlines and can’t actually write. It was a huge motivator.

Writing is a great way to learn what works and what doesn’t, perhaps the best. But the second best has to be reading. Reading novels (or whatever you write) is like its own University, but reading other writers that you have access to, and are struggling with the same challenges — and sometimes figuring out the answers with you, or even getting there first — is a huge advantage. Not only does it help you to get better, it helps you UNDERSTAND why you’re getting better so that you can continue to apply those lessons. Reading my writing group’s work — whether it was good or bad — was easily as helpful to me as the feedback I was given. It's like learning from a whole bunch of people’s lives — their failures and successes — instead of just your own.

#4. The Evolution of the Conversation

I have a few Beta readers and I LOVE them. They are extremely helpful to me, sometimes in ways in which my writing group cannot be. It’s great to have an opinion from outside the box, and I have been lucky enough to find Betas that are strong where my writing group is weak (i.e. a Beta that reads more YA or more Genre/Superhero/Comics/what-have-you than my writing group generally does). So Beta’s are indispensable.

However, there’s something magical that happens in a writing group that can’t happen with a single Beta, and that is the evolution of the conversation. A Beta reads your pages and turns in their feedback to you. A great Beta is open to a dialogue once you review those notes and is happy to answer questions. But that’s still just a conversation that happens between you and a single reader. With a writing group, everyone comes together with their individual notes and thoughts and has a conversation about your work. You would be shocked to see how that conversation evolves as the work is discussed. Ideas are brought up and discarded. People are argued out of opinions they originally held. They all hate or love the same things, or they don’t and they try to convince others that they’re right or wrong. It can be frustrating when they don’t agree, but there’s always truth in there. The reader is of course the final editor of your book, and getting a peek at how a group of those "final editors" view your work and being able to be the fly on the wall to hear them discuss it is simply invaluable.

With the exception of #4, which was a bit of a surprise to me, all of the things listed above were what I had at least hoped a writing group would do for me. However, what I never expected, or even imagined, was how important it would be to have writer friends that understand what you’re going through, independent of whatever submission you may or may not be working on. And while you can have writing friends without having a writing group, I have to say that my writing group gets me and understands me better than most other writers I know.

There are many amazing and fulfilling things about being a writer, but there are equally as many ugly dark things: crippling fear, abject depression, dashed hopes, self-destruction, wavering confidence, narcissism, reclusive behavior, mania/OCD, paranoia, insomnia (and hypersomnia!), moodiness, and so much more. I’m not saying we’re all like that, or that we all experience all of those things, but most of us deal with at least a few of them as a direct result of being a writer, especially those of us that are trying their damnedest to make the “writing thing” an “actual career.”  And it can be really hard for non-writers, and especially non-creative types to understand those dark, ugly things. Which is why I was so excited to discover this last reason why my writing group constantly saves me:

Writing and “being a writer” is a frequently painful and protracted journey filled with epic highs and abysmal lows. And if you’re lucky enough to find the right writing group, as I did, the best thing about being in that group will be having friends that "get it." Friends that encourage you and aren’t afraid to be honest with you. Friends that understand your mania (or whatever other horrible or wonderful thing you’re going through) without having to to be embarrassed. They don't need you to try to explain why you are currently obsessed with one band that you have on a constant loop, or an old soap opera that you are suddenly watching on youtube even though you don’t really like soap operas (don’t ask), or that you won’t leave the house for days on end — they just get it. They get it because they’ve been there and back, and they know they’re likely to be there again, and they hope you’ll be watching out for them, too.

I’m thankful every day that I found the group I found. I was extremely lucky to hit the jackpot with my group the first time out, but even if you have to search around a bit for the right fit, I promise you that once you find it, it's well worth the effort. I never would have made it half as far, half as fast without their constant steady hands and brilliant brains helping me to get there.

Do you have a writing group? Have you ever? Have you always wanted one? Have you never seen the point? Tell me why!

I have a writing group and yes, I loved it when they start arguing about something I've written! I never expected that. Since I write mysteries, it usually means I'm setting up the story well - that some of my readers are guessing one outcome, and some readers are guessing another outcome, and that's good. Other times, though, it illustrates that something I've written is unclear and needs to be straighened out because my readers are getting the wrong impression. Yes, a good writer's group is quite valuable! 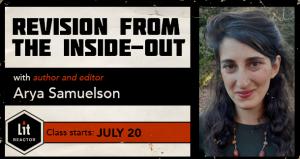 Revision from the Inside-Out with Arya Samuelson

Do you have a story gathering dust? Arya Samuelson will guide through the maze of revision and help you discover your story’s fullest, most potent expression.