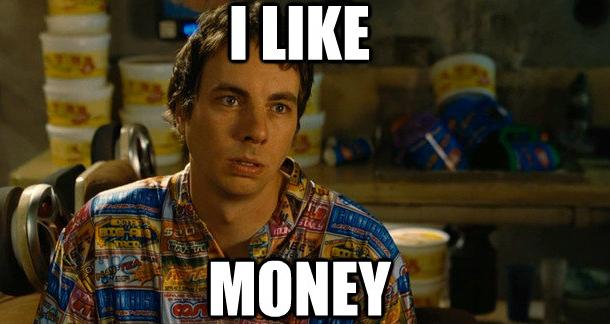 Something wonderful happened when 5 Things You Shouldn't Say to Authors went live back in July. Not only did people take to it, but a lot of our members chimed in with their own recommendations. It became clear that a list of five simply wasn't going to cover it. So without further ado, the next five...

“I could have written this book.”

Ouch! Dick move, bro. It’s one thing to call someone’s writing bad, but to have your efforts trivialized by a non-writer is another issue entirely. I’ve never gotten this one personally, but I’ve read enough Amazon and Goodreads reviews to know that this mentality exists—especially when it comes to mainstream successes a la Fifty Shades of Grey and Twilight. There’s a lot of chatter about how poorly written they are (Google either title with the phrase “I could have written this”), hence, the claim that any ol’ civilian with high school writing skills could scribe one of these. I’ll say what I’ve always said: it’s really easy to say you can do something—in this case, writing a novel—when no one holds you accountable for actually doing it. Having said that: I’m a much better actor than Daniel Day Lewis. I just don’t have time to go to auditions.

It’s really easy to say you can do something—in this case, writing a novel—when no one holds you accountable for actually doing it.

Nothing makes an author feel like a second-class citizen faster than having their credentials questioned. Look, I’m not going to go into a long spiel about which avenues of publication are considered legit. The general perception used to be that The Big 6 was like an ivy league school while self-publishing was akin to going to Greendale Community College. That more or less held true for a while…and then we got Amanda Hocking and J.A. Konrath, and yes, E.L. James, too. These “fake authors” proved you could make hundreds of thousands—or in James’ case—millions of dollars. Monetary compensations aside, writing is writing. Don’t be so quick to pigeonhole someone as “fake published” just because you’ve never heard of the venue hosting their words.

I have a great idea for an app. It’s called iPregnant; it’s an electronic pregnancy test that uses sonar pinging to determine if one slipped by the goalie. Okay, so you go ahead and take care of all the patents and development. I’ll wait for my half of the money at home.

In all seriousness, people do say this…although it’s usually just the first portion—the idea part—at which point, there’s some polite discussion on how it would or wouldn’t work as a novel. That’s fine. People have ideas and the process of pitching makes for interesting conversation. It takes a certain kind of presumptuous asshole, though, to think they can hustle a publishing contract on an idea alone—not to mention the part where absolutely no work is expected on their part. If you really think you have a good idea—whether that be an app or a novel or whatever—it’s probably best you do it yourself.

“Can you hook me up with your agent/publisher?”

It still weirds me out when some dude that I used to know only by an avatar and witty screen name hits me up on Facebook wanting either my agent’s contact info or an insider’s deal with my publisher. Not weird in the “I’m unaccustomed to helping people” way. I have no problem helping people out…if I know them. And coexisting on the same website doesn’t equate to knowing someone. Here’s what you've got to understand about this: an author can’t simply gift agency representation or a publishing contract. At most, they can recommend you as a potential client, and to do that they’d have to be a fan of you and your work—not someone who is only vaguely familiar with you. The agent/publisher “hook-up” is not passive; it’s a formal endorsement in which one author vouches for another. If you’re going to ask for favors, at least have a pre-established relationship with the person first.

“Can you give me a free copy of your book?”

No way, Jose. To quote the great Frito: “I like money.”

My number one all time most hated question to be asked whenever someone learns that I'm a writer:
What do you write?

ETA: Actually any question about money. I get all kinds of weird questions and comments about money-- and most of them tie "talent" to cash, too. I have never thought it was appropriate to talk to acquaintances about money... And I don't see my police officer/office worker/etc at the same parties getting hounded about their paychecks. I think it's akin to "Oh, you're a writer? PROVE IT. How much money do you make?!"

Hahahaha, awesome. I have no more input than that. :D

"What do you write?" is probably the question I get asked the most that I don't know how to answer.  It's a legit question... but it drives me nuts.

"Oh, you know... umm.. words and stories.  About people and relationships."  Awkward pause.  "Mostly realistic fiction... and some other stuff."

Dino Parenti from Los Angeles is reading Everything He Gets His Hands On September 13, 2013 - 10:27am

Good list. "I have a great idea for a book..." is my favorite. Or, should I say, least favorite. I always find that it's not usually followed by anything, implying that I have no good ideas myself, and that his/her's are gold. That's even worse than offereing to "split the proceeds."

Class Director
Rob from New York City is reading at a fast enough pace it would be cumbersome to update this September 13, 2013 - 10:54am

The question I've grown to dislike is "Can I take you out for a drink?"

Some people are genuinely cool and want to have a good time, which I'm always down for, because hey, I really like drinking.

But then there are the people who I barely know and act like we're old friends because they want me to do something for them. And it always starts the same: "Can I take you out for a drink?"

Jonathan Riley from Memphis, Tennessee is reading Flashover by Gordon Highland September 13, 2013 - 11:50am

I've got a friend that's a musician, he's really talented and creative, but whenever he has an "idea" for a movie or novel (usually pretty cool stuff) he always expects that I'll stop what I'm doing and write his story. Sometimes I just have to say, "I'm too busy, It's a great idea. Try writing it yourself."

He never does. Apparently he's too busy too.

A guy once asked me: why?

Him: *long pause, much crinkling of head and frowning* no...I just don't get it.

@Howie - I have the same problems with people asking what I write.  So much so that I put the answer in my bio:

"Jessica is the writer of stories about people and the things they do."

That's all I got.

Dino Parenti from Los Angeles is reading Everything He Gets His Hands On September 13, 2013 - 6:09pm

Stephen King has a nice response to the question often posed to him about why he writes horror, and I feel it can apply to why we just write in general: "Why do you assume I have a choice?"

During my years in advertising I was frequently told, "I have a great idea for an ad." I would suggest, to the individual's immediate agreement, that they were probably talking about a TV spot. Nobody ever said they had a great idea for a print ad, even a two page spread! When approached like this by a neuro surgeon I suggested I first give him my great idea for brain surgery. He was skeptical but I explained he would no longer have to drill or cut away the patient's skull if he were to first remove the pants and underwear where he would instantly discover there was alread a covenient hole to access the afflicted area. Other example for other areas of expertise come to mind but this was the most satisfying.