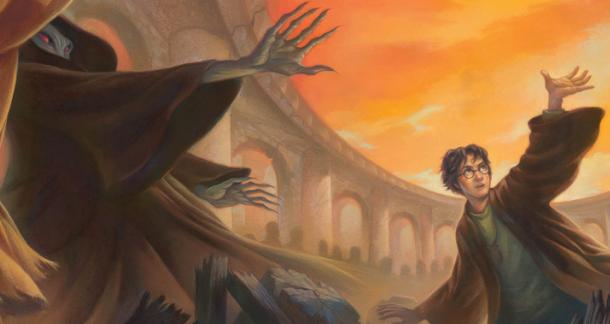 ‘... evacuation will be overseen by Mr Filch and Madam Pomfrey. Prefects, when I give the word, you will organise your house and take your charges, in an orderly fashion, to the evacuation point.’

So announces Professor McGonagall at the beginning of “The Battle of Hogwarts,” the 31st chapter of the final installment in the Harry Potter series, Harry Potter and the Deathly Hallows. These chilling words precede one of the most epic and heartbreaking chapters in the series, in which Lord Voldemort and his Death Eaters turn up at the School of Witchcraft and Wizardry and attempt to take control of the school (and kill Harry Potter) by means of war.

According to canon, the battle takes place on May 2nd, 1998 — which is why for many Potterheads around the world, May 2nd has been dubbed “Harry Potter Day.”

So to commemorate May 2nd, AKA Harry Potter Day, AKA The Battle of Hogwarts, here are five nuggets of trivia you may not know about the 31st chapter.

1. J.K. Rowling is not Canadian, but she is sorry

If you felt betrayed when Fred, Lupin, or Tonks died, you’re not alone. Many of us had to pause after finishing the “Battle of Hogwarts” chapter because our vision was too blurred from salty tears to keep reading.

Which is why Rowling, always known for her fan-love, has taken it upon herself to tweet annual apologies for the deaths that occurred during the battle. It won’t bring them back, but it might help with the sting that surely lingers on 12 years later.

It's the 16th anniversary of the Battle of Hogwarts. I'm having a moment's silence over my keyboard. I hated killing some of those people.

Today I would just like to say: I'm really sorry about Fred. *Bows head in acceptance of your reasonable ire*

Once again, it's the anniversary of the Battle of Hogwarts so, as promised, I shall apologise for a death. This year: Remus Lupin.

OK, here it is. Please don't start flame wars over it, but this year I'd like to apologise for killing (whispers)... Snape. *runs for cover*

It's that anniversary again. This year, I apologise for killing someone who didn't die during the #BattleofHogwarts, but who laid down his life to save the people who'd win it. I refer, of course, to Dobby the house elf.

And on that somber note, Rowling has also used Harry Potter Day to make some startling announcements that we’re glad didn’t see the light until after the final book was published. 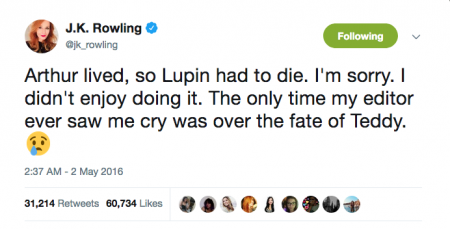 The poor Weasleys! Rowling has said that, statistically, it would have been unrealistic for all of the Weasleys to survive the battle, and she knew one of them had to go. Arthur was considered because Rowling felt that parents being killed would show the long-lasting effects of the battle long after the story’s end.

In the end, Arthur being spared was to Lupin’s demise. At the time of the book’s release, Rowling told The Today Show: “If there’s one character I couldn’t bear to part with, it’s Arthur Weasley. I think part of the reason for that is there were very few good fathers in the book. In fact, you could make a very good case for Arthur Weasley being the only good father in the whole series.”

And if you’re fuming at the thought that Rowling considered killing one of the trio off, hear her out for a moment: “Funnily enough, I planned from the start that none of [the trio] would die. Then midway through, which I think is a reflection of the fact that I wasn’t in a very happy place, I started thinking I might polish one of them off. Out of sheer spite. ‘There, now you definitely can’t have him anymore.’ But I think in my absolute heart of heart of hearts, although I did seriously consider killing Ron, [I wouldn’t have done it].”

Many readers debate whether Lavender Brown actually died during the Battle of Hogwarts. How can that be? Lavender might not have been a main character but she certainly played a large enough role (Ron’s first girlfriend, for starters!) to warrant an acknowledgement of her death.

Let’s look at the facts:

At the end of the day, Rowling has never denied nor confirmed Lavender’s death, so we’ll choose to be optimistic and say she is living a happy life somewhere, and is totally over Ron.

4. You can find out how you would have fared during the Battle of Hogwarts

If you want to take a break from finding out what kind of cheese you are or what Sesame Street character you are based on the year you were born, you can take Buzzfeed’s “Can You Survive The Battle Of Hogwarts?” quiz.

A choose-your-own-adventure experience, you will be faced with decisions such as:

As you make your way through the quiz, let the wise words of Albus Dumbledore ring through your head: “It is our choices, Harry, that show what we truly are, far more than our abilities.”

5. The final Harry Potter movie might have paid homage to all of the previous films

This Marie Claire article written by an astute movie-watcher makes a convincing case that the crew behind Harry Potter and the Deathly Hallows, Part 2 left a sneaky little Easter egg for audiences to find.

Here is the Battle of Hogwarts scene in question:

And here are the references to the previous films to watch out for:

We hope these facts and fan theories comfort you on May 2nd, when Potterheads around the world remember the tragic, but undeniably well written, Battle of Hogwarts. Finally, if this post has you reminiscing about the first time you read the Harry Potter books and wishing for more, check out this list of 20 magical books like Harry Potter.