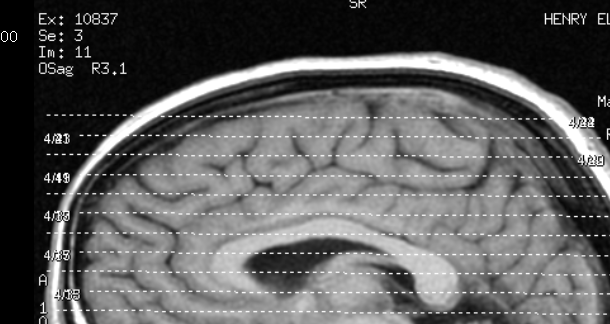 At first glance, neuroscience and fiction may seem strange bedfellows. But as it turns out, when you hook up the average human being to functional magnetic resonance imaging (fMRI) and give them a novel to read, a veritable Fourth of July goes off in some niftily specific areas of their brain.

Which should be of particular interest to any bona fide lit geek.

It's not as if the men and women in the white coats have cracked the code for writing the next bestseller. But there's plenty of food for thought in the emerging body of work on the neuroscience of fiction (and art in general). Far more, in fact, than I could hope to tackle here.

So please know—this isn't a complete primer on the subject or an in-depth examination. It's simply one editor's quick and dirty take on what current brain science tells us about fiction that kicks ass.

1) Written on the Body, Part One

Which means that when you read "he threw the ball as hard as he could," the same part of your brain lights up as if you were throwing the ball. Same thing if tears sting his eyes, or the sweat prickles her neck, or what have you. To your gray matter, it makes no difference whatsoever whether something physical is actually happening or is simply being described.

And here's where it gets even more interesting: the same thing appears to occur when we're dreaming. (Meaning, if you're dreaming about running, the same part of your brain lights up as if you were actually running—despite the fact that what you're actually doing is sawing logs.)

That's why writing teachers often tell us to use the senses and use specific physical details when we create our scenes. Because the more physically detailed a scene, the greater the degree to which the human brain creates a completely realistic, immersive parallel life experience, allowing us to actually (sort of) experience what the characters experience.

And that, you have to admit, is pretty cool.

2) Written on the Body, Part Two

The brains of the most social primates appear to be bigger than those of their less-social contemporaries. They also seem to possess more facial muscles, corresponding to a wider spectrum of expressions. Which is to say, there appears to a positive correlation between these big brains of ours and our ability to process emotionally nuanced body language in others. (The better, scientists have posited, with which to predict what those others will do.)

How many times have you watched a movie with the sound off—on an airplane, say—and found you could still pretty much follow the plot? I certainly have, and no wonder: our brains are highly attuned to the nuances of body language. The exact percentage of the information in any given conversation that's conveyed by nonverbal cues has been debated, but it's generally agreed to be more than 50 percent.

Which is to say that gestures, posture, glances, expression, tics of movement, etc., etc., etc., are not merely some form of window dressing you, the author, can throw in here and there to spice up dialogue. They are, in fact, critical in terms of how your reader will take a given line of dialogue, or assess underlying issues and tensions in a scene.

Some authors use these sorts of visual "tells" sparingly, while others use them consistently, helping to create a clear sense of pacing in the conversation. But dialogue entirely lacking in this sort of information, in my experience, is like trying to follow a movie with the picture off—which, you'll have to admit, is a whole lot harder.

The human brain is hard-wired to track patterns, to look for cause and effect, and to make predictions. Because if so-and-so from your clan, who ate the blue berries, got sick and died last week, and then so-and-so from another clan, who died too, happened to have blue stains around their mouth when they keeled over that one day at breakfast—and then you see your baby headed straight for those shiny blue berries...

Let's just say, it's not hard to see how this sort of thing has been useful in keeping homo sapiens in business for the past 200,000 odd years.

But all too often as an editor, I see novels that either don't set up their big developments well enough for the reader to suspect what's going on or explain absolutely everything. Skillful storytellers understand, intuitively, that what pulls the reader forward in the story is often a trail of crumbs through the dark wood that indicates where you're going with all of this and what will be important—without coming right out and saying it.

That's why creative writing instructors often tell us that the best endings seem both inevitable and unexpected. Inevitable because on some level, whether conscious or subconscious, the reader could tell where the story was headed. Unexpected because where, exactly, all these clues were leading still wasn't too obvious.

There are times when I tell my clients, "give your reader a job." This, essentially, is what I mean. Your reader is a smart monkey, descended from a long line of the same. And one of the chief pleasures of fiction—one of the main reasons we return to it, again and again—is for the pleasure of figuring things out.

Have a number of characters with competing agendas in your story trying to snow each other? Eavesdropping? Missed cues? He know this but she doesn't, and therefore tragedy ensues? Good news! The human brain can't get enough of this kind of low-budget drama.

That's because the human brain, as far as we can tell, evolved to not only keep track of a number of different people's motivations at the same time, but to be constantly figuring out what other people are thinking. The fancy term for this is theory of mind. The less-fancy term is knowing what-is-the-what in your family, community, and tribe, and therefore not winding up on the ass end of whatever ill shit is going down.

As in: He's out to get him, but he doesn't know it! She's cheating on him, but he has no idea! She's biding her time to exact her revenge!

(And lest you think such machinations are generally limited to telenovelas, think again. Shakespeare leaned pretty heavily on this sort of thing, as did Jane Austen, and they both seem to have done all right.)

Bottom line: people with hidden agendas are fascinating. And if we know a little something the other characters don't know, so much the better.

It has been suggested that the purpose of stories—that is, the evolutionary advantage they confer—is in their ability to prepare us for threats and challenges we have yet to face. (Again, interestingly, the same has been suggested of dreams.)

It's no wonder, then, that one of the most ubiquitous pieces of writing advice you are likely to encounter is to focus on conflict. Because not only does conflict get our attention, it can offer us tools with which to deal with difficulties in our own lives.

That's why we, as authors, really do have to be at least a little sadistic—or, at the very least, grown-up versions of kids who put too many bugs in a mason jar, just to see what they would do. If something can go wrong for your protagonist, it probably should; their aims should not be too easily fulfilled. And if there's some uncomfortable truth they're hiding from, so much the better—because it will, inevitably, come around to bite them in the ass.

Bottom line: If there isn't some sort of significant difficulty your protagonist will have to face, not only will your reader not care about the character (you knew that already, right?), your story won't have anything to teach them.

And so there you have it: one editor's Cliff's Notes on the emerging body of work on fiction and neuroscience. If you're interested in leveling up your geek game, the following resources would be a good place to start:

A quick and dirty run down on some recent studies from D News.

Wired for Story: The Writer's Guide to Using Brain Science to Hook Readers from the Very First Sentence--Lisa Cron

I love these types of articles (and lots of others, but these types of brain-story-etc. connections). And this one is a great introduction. many thanks.

Also, that is a great picture.

Another great column...if only because it helped convince me I've done a number of things right in fiction lately!

Conflict should still make sense in context. It can't just be any conflict, it has to be the right conflict set up from the previous crumbs.

And yes, this article is awesome.

I wonder how the brain of person who lacks imagination reacts to reading. A friend of mine, who loves to read, once told me that she has never been able to picture anything she's read. The stories do not play out like a movie in her mind. Instead, she focuses on the words. If she likes the way it is written, the way the words are physically laid out on a page, that is how she determines if the book is good. So, I wonder, does her brain have the same reaction as someone who is mentally picturing everything and experiencing it as an internal film? The science behind this is intriguing either way.

All great notes to have stuck to the monitor! Thanks for this.

This is a really awesome article!!! Thanks for it!