Face it: In this season of harvest, bounty, and plentitude, sanctimony reigns. We justify our piggishness at the Thanksgiving table by fooling ourselves into thinking that we’re celebrating a noble emotion: gratitude. But in fact, we give thanks, oh Lord, for our third helping of stuffing, for the host’s choice of a delightful tarte tatin over a clichéd pumpkin pie, and most of all for the fact that nobody makes that godawful 1950s canned sweet potatoes with marshmallows casserole any more. (What’s that you say? Your grandmother makes this horror every year? Well, sorry to break it to you, but grandma’s going to burn in hell in that special flaming circle reserved for those with bad taste.)

Really, the holiday is pure gluttony. We gather together to ask for more gravy; let our congregation escape constipation.

Which way to the vomitorium?

As an antidote to this season’s ostentatious observance of a holiday that celebrates greed disguised as gratitude, here are five books – four novels and a memoir – in which ingratitude rules the day. Let us celebrate that instead. 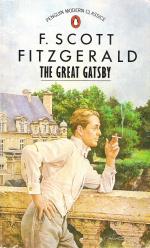 Fitzgerald’s major work is, in fact, the Great American Novel everybody keeps talking about. The book has everything that makes this country great: sex, money, jealousy, class consciousness, the American Dream, the emptiness of the American Dream, a creepy optometrist’s billboard…. It may not strike you as being about ingratitude, but the ending contains more than enough thanklessness to satisfy this column’s requirement.

You probably remember the basic storyline from having read the book in high school (unless you were a complete stoner, in which case you don’t remember high school at all and may not remember the beginning of this sentence), so I’ll focus on the ingratitude that comes to define Gatsby’s enormous social circle in the end. After a case of multiple mistaken identities – the wrong driver is driving the right car; the wrong hit-and-run perp is nonetheless having an affair with the right guy; the victim’s husband shoots the wrong guy – Gatsby dies.

Although Nick, our wide-eyed narrator, barely knows Gatsby and has spent the novel notably distant in attitude from Gatsby’s many supposed friends, it’s Nick who’s stuck with the task of arranging Gatsby’s funeral. Practically nobody shows up.

None of the moneyed, well-dressed, laughing, blathering guests at Gatsby’s innumerable parties has the moral backbone to attend. They abandon Gatsby the instant they learn of his death. In a flash, Gatsby slides from the Host with the Most to an embarrassing pariah. So what if his gains were ill gotten? The shallow American aristocratic pigs are all too happy to feed at Gatsby’s well-appointed trough while he’s alive, but none of them has the heart or soul to honor him at his last rites, the ungrateful motherfuckers. Contrary to the corny Thanksgiving Pilgrims-and-Indians lovefest myth, it’s ingratitude that’s central to the great American narrative. 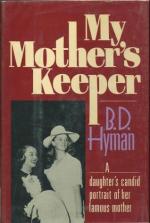 'My Mother’s Keeper' by B.D. Hyman

Let’s say your mother is a movie star. No, not just any movie star, but one of the most luminous and recognizable stars Hollywood ever produced. Let’s also say your mother had a longstanding feud with another fabulous Hollywood star. And let’s say that the latter star’s daughter wrote a bestselling book about her disastrous childhood at the hands and wire hangers of her demented mother, a history so horrifying that many of the star’s fans at first simply refused to believe it was true. A tale so warped that when it was adapted for the silver screen it became a camp classic featuring a performance so precise, so spot on, that the actress who played the star quickly regretted taking the role because it essentially ruined her career. Makes ya wanna write your own tell-all bestseller, doesn’t it?

The result is the wretched, hypocritical, puke-inducing My Mother’s Keeper, written by Bette Davis’ sharper-than-a-serpent’s-tooth daughter B.D. (which, by the way, is pronounced “beady,” like in “beady little eyes”). B.D. has been, as they say, “born again,” meaning that she became a fundamentalist Christian, though the expression also implies that Davis’ daughter didn’t get it right the first time around. Evidence suggests the likelihood of such a natal malfunction. B.D. was a bratty child, and her memoir — which she published while her mother was still very much alive — inadvertently bears this out. Christina Crawford faced genuine horrors meted out by Joan; B.D., on the other hand, spends her autobiography whining about perceived abuses that have the opposite effect of making the reader feel rather jealous. The memoir’s section covering Bette’s trip to Europe with B.D. reads more or less like this: “First she made me go to see a lot of boring churches and museums, and then she took me out to expensive restaurants and made me eat steak!”

The bovine B.D. is now (and has been for many years) the spiritual leader of B.D. Hyman Ministries of Charlottesville, Virginia. At the time of her book’s release, she actually had the gall to claim that she’d written the book for her mother’s own good — to help her see her errors and live a better, more Christ-like life. Yeah, that and a $100,000 advance.

Moral: Stay out of show business, and don’t have children. 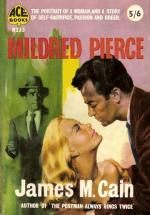 This 1941 novel is particularly seasonal: the eponymous heroine pulls herself out of financial distress by baking pies — spectacularly delicious and plentiful pies. It’s the Great Depression, and earnest Mildred decides to leave her unemployed husband, Bert, and set out on her own. She finds work waiting tables, thereby humiliating her spectacularly obnoxious daughter, Veda. Veda, you see, finds being the daughter of a waitress to be demeaning, humiliating, a total bore. As she grows up, she continues to view her mother as a complete embarrassment — she’s like every teenager in this regard, except that she’s demonic about it — and she makes no secret of her contempt, despite Mildred toiling her way up from waitressing to owning three restaurants and a thriving pie bakery.

But no — it’s still not enough for Veda. Veda becomes an opera singer. Mildred remarries; the guy’s name is Monty. (Remember this name.) Mildred and Monty begin living extravagantly, mainly to placate Veda, whose greed is boundless. In a most misguided effort to mollify her spoiled brat of a daughter, Mildred (how to put it?) um, embezzles funds from her pie and restaurant business to pay Veda’s extravagant bills. Mildred’s business partner discovers her impropriety. He’s not happy about it.

A desperate Mildred rushes to Veda’s place, hoping to borrow some money from her rotten daughter, only to find Veda in bed fucking Monty. (See?) It’s not a pretty picture: Mildred nearly chokes Veda to death but succeeds only in destroying the ingrate’s operatic voice.

Or so Mildred thinks. At the end of the novel, Mildred learns the bitter truth: the satanic Veda has faked her loss of voice to get out of a bad contract, has gotten a much better deal from another opera company, and moves to New York with the despicable (but apparently most humpable) Monty. The brokenhearted Mildred closes the tale by getting blotto, and Veda’s ingratitude triumphs.

Moral: Stay out of the pie business, and definitely don’t have children. 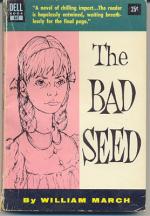 'The Bad Seed' by William March

Apart from her habit of killing people who get in her way, little Rhoda Penmark’s problem is a distinct lack of gratitude. She’s reminiscent of B.D. Hyman in this regard, though it must be said that whereas B.D. tends toward character assassination, dainty Rhoda goes in for killing her victims in the physical sense. Both are selfish, cold, and utterly without shame.

Plotwise, Rhoda’s first victim is the little Daigle boy, who makes the mistake of winning a penmanship prize that Rhoda believes should rightly have gone to her. So she drowns him. Everybody notices the crescent-shaped marks on the waterlogged Claude Daigle’s face, but nobody thinks to check out Rhoda’s matching cleats.

Rhoda’s mother, Christine, is troubled by the Daigle boy’s premature death. She can’t help but recall the mysterious demise of the family’s dog, who, inexplicably, went flying out of a second floor window one day when nobody was looking. And then there was the kindly old neighbor woman who took a tragic, unaccountable, and decidedly fatal fall down the stairs shortly after promising Rhoda a lovely necklace as a future bequest.

Rhoda is without remorse, let alone gratitude for the lovely apartment in which she lives, not to mention her adoring mother, who in my opinion takes an abnormally long time to realize that her darling princess is a heartless psychopathic bitch.

The janitor, Leroy, however, has no such doubts. He sees through Rhoda’s phony sweet façade right away. What he doesn’t see is Rhoda lighting his mattress on fire while he’s asleep on it, so he burns to a satisfying crisp.

We later learn the meaning of the title and the supposed solution to Rhoda’s unfortunate problem: she’s the granddaughter of a notorious serial killer. She’s got killin' in her blood. Still, I can’t help but think that the whole triple homicide rap would have blown over if Rhoda has just once said “thank you.”

Moral: Whatever you do, do not have children. 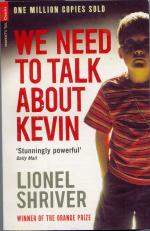 'We Need to Talk about Kevin' by Lionel Shriver

This brilliant, exceptionally disturbing novel’s antecedent is certainly The Bad Seed. Its anti-hero, Kevin Khatchadourian, has already killed eleven people in a high school massacre at the novel’s opening, so there oughtn’t be much suspense. But Shriver is a precise, clever writer who keeps revealing new aspects to the killings, and the novel reads like a thriller.

It’s an epistolary novel written as letters from Kevin’s beaten-down mother, Eva, to her husband. Eva senses pretty much from Kevin’s infancy that there’s something terribly wrong with the boy, but her husband obstinately refuses to see it. He keeps trying to interest the little whippersnapper in classic boyish pursuits, but Kevin simply has no apparent affect and grows up radically aloof. Like Rhoda Penmark before him, KK (as he becomes known) displays not a modicum of gratitude for being called into existence and in fact seems to resent his birth, not to mention the lives of everyone around him.

Even though there’s no secret about what KK does to nine of his classmates and two adults, the revelatory chapter is purely horrifying. But once again, it’s my firm belief that the massacre would never have happened if little Kevin had been taught to appreciate what his parents provided him. A simple "please" and "thank you" should have been beaten into the child from the get-go.

Moral: If you think your kid is a psychopath, he probably is one, so don’t take chances: absolutely do not have children.

What is your favorite book about ingratitude?