40 Years Ago, Howard The Duck Ran For President 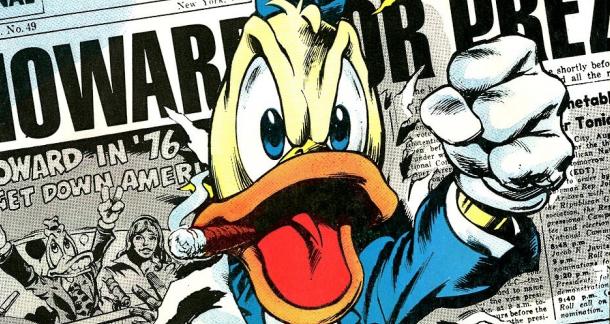 I've got a piece of election history for you, and I'm betting it's one you didn't hear about yesterday, no matter how much news you watched.

Let me take you back 40 years. Yes, 1976. America was tooling around in automobiles powered by 59-cent/gallon gas. NASA released the famous Face on Mars photo. A baby named Joseph Lawrence Mignogna, Jr. was born, and little did we know that a scant few years later, he'd be "Whoa"-ing his way into our hearts.

And a lovable, cigar-chomping duck that I dare call plucky made a bid for the presidency.

Howard the Duck made his debut in Adventure Into Fear #19 in late 1973, barging his way into a Man-Thing story and quickly developing a solid, if cultish, following. 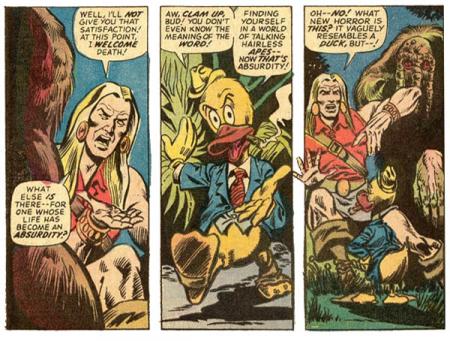 Howard was your basic cartoon duck, but with a few differences. For example, you know how a typical cartoon character, if flattened by a steamroller, would blow on his thumb and re-inflate? Howard's writer/creator Steve Gerber said that were Howard to be steam rolled, "the result [would be] blood on asphalt."

Of course, Howard's resemblance to Disney's duck of note didn't go unnoticed. There was some back and forth, and eventually an agreement was reached: Howard would wear pants. While Disney's wholesome duck kept his freeballing lifestyle, Howard's corkscrew would be clothed. And after all that trouble, Disney ended up purchasing Marvel, meaning both duck dynasties are now under the same roof anyway.

Howard's been in and out of publication since the mid-70's. Even when he's not helming his own solo title, he's continued to appear in mini series and cameos. Perhaps more interesting than dates and issue numbers, here's a brief list of things Howard has done or had done to him in the last few decades:

And whatever the Marvel event, Howard's been on the periphery. Even during Marvel Civil War, Howard was right there. Okay, he wasn't throwing fists. He was doing paperwork. Howard tried to follow the rules and register as a superhuman, but it turned out that the government had previously decided to officially deny the existence of "The Duckman of New Jersey" due to Howard's continued weirdness having become a bureaucratic nightmare.

Of course, we can only dance around the fact of the Howard the Duck movie for so long.

Howard the Duck was the first movie featuring a Marvel character (with the exception of some serialized 1940's Captain America nonsense). Yes, before the Hulk smashed Loki, before Thor (beThor) flexed on-screen, even before Dolph Lundgren busted out the hair dye and skull t-shirt to play the Punisher, Marvel created a movie where a duck tried to have sex with Lea Thompson, which would be gross if Thompson hadn't played a role the year previous in which she was trying pretty hard to get it on WITH HER OWN SON.

As cartoon-y, silly characters go, Howard hit it big. And in the midst of his rise, he ran for president.

The in-comic narrative of Howard's presidential bid started by chance, like most of Howard's adventures. Howard was working security at an election event, thwarted an attempt to bomb the place, and wound up being carried around on the shoulders of political movers and shakers, who decided to nominate Howard as their candidate.

Howard ran under the banner of the Up All Night Party, and his campaign slogan, "Get Down, America!" sounded empty, but this fowl had plans: 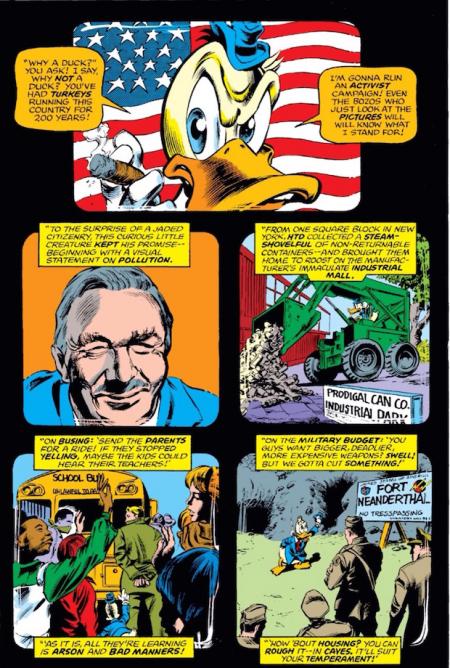 The most coherent version of Howard's politics comes from this mock interview between Howard and writer Steve Gerber, which appeared in Marvel Treasury Edition #12:

Steve Gerber: I can’t picture a fellow with your sardonic bent plodding away at a workaday job.
Howard the Duck: How true, how true. I never kept one job more than three an’ a half weeks. Which is another advantage of the presidency. They can only fire ya for high crimes an’ misdemeanors. That stuff, I don’t pull. I just mouth off a lot…
SG: You’ve expressed dismay at certain trends in popular culture, particularly the glorification of the rogue and the glamorization of violence. Are we to infer from this that you’d advocate some form of media censorship?
HTD: You gotta be kidding! Ya don’t eliminate garbage by turnin’ it into a black market commodity, an’ ya don’t elevate tastes by gagging writers an’ artists. Look, there’s nothin’ wrong with makin’ heroes outta non-conformists. I’ll even admit to a rebellious streak myself. It’s just—at the risk o’ soundin’ pompous—what seems to distinguish today’s anti-hero from yesterday’s is the former’s willingness to callously exploit other people to achieve his own independence from the system. It’s the difference between a poet an’ a vulture, basically.
SG: That’s pretty heavy.
HTD: Yeah. Nearly collapsed under its own weight, didn’t it?
SG: I mean, do you think the American public is ready for that degree of subtle reasoning from its president?
HTD: They better be. If you turkeys can’t even think that deep, this nation’s had it!
SG: We seem to be gingerly approaching the core of your political philosophy, Howard. You want human beings to think.
HTD: Yeah, well, I know its askin’ a lot from a hairless ape, but… !

Of course, Howard's in-comic run at the White House was thwarted. No, not because Howard failed to produce a birth certificate, even though he's a duck-man not of this Earth. Howard's downfall came after a leaked photo showed him in a bath tub with a woman.

America: The land where it's fine to be a duck-man president, but being in a bath tub with a woman is just too bizarre.

Alright, what's the big deal? Another comic book story come and gone. Howard runs for President, loses, then probably ends up in space, fights a giant gingerbread man, maybe teams up with ROM Space Knight or something. We get it.

What makes this story special is that, this time, the story didn't live and die entirely between the stapled pages of the comics.

Howard's campaign started to bleed into our world in the back of Howard the Duck issue 4, where it was announced that Howard would be Marvel's first candidate for President, and that for $1.25, you could have your very own Howard election kit, including this sweet button: 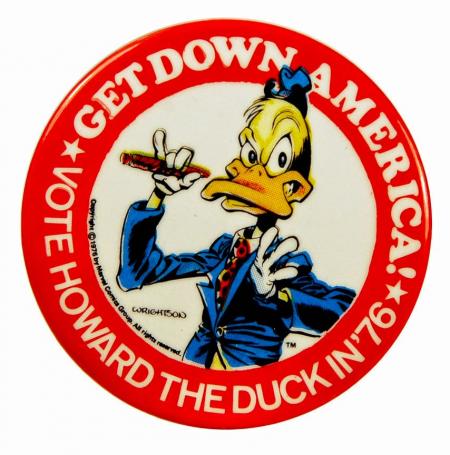 And a short while later, a limited edition, very Presidential print by Bernie Wrightson was made available. Now isn't that a handsome addition to your collection? 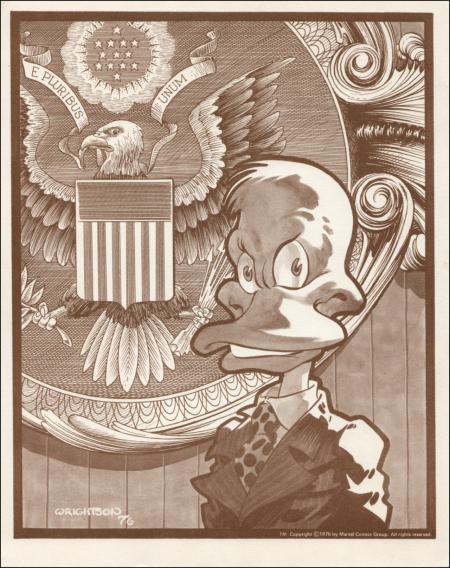 Here's where the rumoring begins.

The legend may or may not have started with Stan Lee, who in Marvel: Five Fabulous Decades of the World's Greatest Comics, claims that Howard's in-comic and real world campaigning earned him thousands of real-world write-in votes.

Yes, Americans allegedly stepped into the booth, wrote in the name "Howard The Duck," and then stepped out of the booth and rewarded themselves with a nice phosphate or whatever the hell they drank back then.

Since 1976, this rumor has spread all over the world. But is it true?

Well...hard to say. My internet sleuthing couldn't turn up a single testimonial of someone who voted Duck in '76. God knows I wanted it badly, but I just couldn't find anyone who even claimed to have turned in a vote for Howie.

Is it possible that some of them were for Howard?

Is it possible that Howard received more votes than Frank Taylor, who ran under the United American party and got a total of 36 votes?

Totally. Yes. In the America I want to live in, it's not only possible that Howard received 37+ votes, it's certain.

I guess what I'm saying is, having Howard anywhere but last place is good enough for me, and it's pretty damn respectable for a duck. I, for one, can't claim to have gotten a single write-in vote, and I'm an actual human!

That said, this has become a new obsession of mine. If anyone knows anyone, if anyone can find anyone who voted for Howard in '76, please comment below. Put the word. Make your voice heard. I want to verify that ONE person voted Howard. I want to believe in truth, justice, and the American "Waugh!"

How Did Comics Become a Social and Political Battleground?

It's too late for a write-in, right?