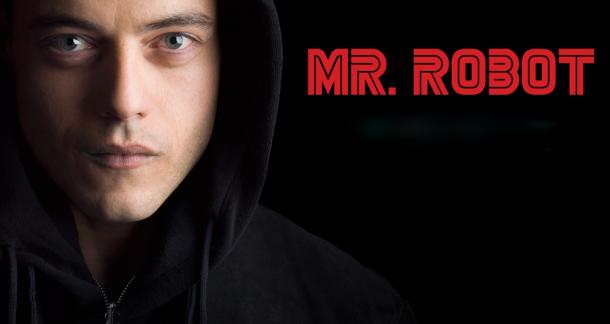 A few weeks back I wrote a column explaining what we could learn about storytelling from the failures of True Detective Season 2.

Today's column is dedicated to another series which aired on television about the same time as TD2. Like TD2, this series breaks many of the conventions we associate with primetime drama. But where TD2 failed, this series triumphed. Spectacularly.

Mr. Robot was prefaced by a stunning marketing campaign and has transformed the fortunes of its network, USA, from alienated hoodie-wearing loner to hacktivist superstar.

But how? Those of us who read widely will know that Mr. Robot does nothing that hasn’t already been attempted successfully in print fiction. The genius of its writing lies in extracting the best from the cutting edge of lit and successfully using it in another medium. Those of us who write now have a primetime example of how to apply this refined and extracted knowledge to our own work.

So come friend, there are things I want to say. Things about weirdness and plotlines and tech. Today your education in the fringes of fiction begins.

Lesson 1: Make your characters weird. Now make them weirder. No, even weirder.

Fiction is like speed dating. If the person sitting across the table fails to make your heart beat faster at some point in the first thirty seconds, chances are you’ll move to the next chair without troubling to enquire after their phone number or SnapChat handle.

Faced with a new character across the table, audiences must feel their pulse increase the same way they would if they happened to meet the date of their dreams. Lust is a good starting point for fiction, but curiosity will get you as far, if not further — we’ve all met the gorgeous stranger who turns out to be as interesting as the inside of a phone book, as well as the homely type who seduces you with their charm, mystery and wit.

Meet any of Mr. Robot’s characters on a speed date and yes, you’re more likely to ask for a restraining order than their number, but one thing’s for sure, your heart will beat faster around them.

Mr. Robot offers its audience the speed dating equivalent of strolling into a seedy night club in 1930s Berlin and offering to buy everyone a drink. In Mr. Robot, everyone has a past. Sometimes several pasts. Sometimes they have someone else’s past. Elliot, the show’s main character, suffers from social anxiety, depression, drug addiction and delusions. He narrates the action, but can’t quite tell the difference between what’s really happening and what’s playing out on the inside of his head. Tyrell Wellick, Elliot’s chief adversary, responds to a bad day at work by paying a homeless guy to take a beating from him. And Tyrell is normal next to his wife Joanne, who likes to be ball-gagged and tied to a bed. While pregnant. She also induces her labour the old fashioned way with a darning needle, to rescue Tyrell from a police investigation. As you do. Meet any of Mr. Robot’s characters on a speed date and yes, you’re more likely to ask for a restraining order than their number, but one thing’s for sure, your heart will beat faster around them. Probably from fear.

Make sure your characters are the kind of people your audience will never forget. Make them play against type (who said pregnant women can’t be into ball-gags anyway?), crush clichés, give them awful attitudes, make them say terrible things. Make them unforgettable and your audience will want to read about them, just to find out what hideous act they’re going to perform next

Lesson 2: You don’t need plot. All you need is impetus.

Forget about plot, unless you want to remember it, and even then I recommend you forget about it. Mass market fiction isn’t going to part from the traditional three act structure anytime soon, but if that isn’t your literary wheelhouse, then you will quickly find that plot can quickly become more straightjacket than inspiration.

The difference between plot and impetus is the difference between driving along a highway and launching yourself down a snow covered hill in the dark. Both journeys will end eventually, but only one follows a fixed and predictable path. Mr. Robot proceeds by impetus. The chains of cause and effect in the various subplots become so long and backtracked that they form an impenetrable tangle. Teasing them out is a waste of time – you’re never going to work out whose side Gideon really works for or whether Whiterose is telling the truth about Dark Army. Not being completely sure of anything is not only a keystone of Mr. Robot’s mindbending charm, it’s one of the main reasons it succeeds.

Using impetus rather than plot means that characters don’t require a solid rationale for each action, they simply need to respond to each situation in a way that tightens the screw on someone else. That response doesn’t have to be any more logical or explicable than the course of your falling body through the snow. Creating impetus means creating situations that force the characters to act. It’s like gravity – create the right situations and once the process has begun it will gain a momentum that obliterates any questions in the mind of the audience about why people are acting the way they do.

Unless you want to write mainstream, don’t worry too much about plot holes or explaining everything. Audiences can tolerate great quantities of uncertainty if there’s enough impetus behind the action. Create the impetus and interest will follow.

I could list the tech wonders of Mr. Robot, but other people have already done that, and in this context, extolling the accuracy of the show’s hacker tactics — however much one segment of the audience adores them — would miss the point.

The tech element of Mr. Robot provides much more than handy ways for Elliot to spring Vera from jail or get inside Steel Mountain. It’s the backdrop for the whole drama – the canvas in front of which the action takes place. Setting, like a music score, provides an emotional context for the drama. We as an audience are primed to understand that working in tech is isolating, focused, intellectually demanding and implies a dislocation between the simplicity of a product and the complexity behind it. Many shows use a tech setting to deliver this tacit emotional message but most play it safe and never get into the gritty detail, for fear of slowing down the action or possibly hurting the delicate brains of the watching public. Mr. Robot has no such scruples. For Mr. Robot the details matter, even if most of us don’t understand them. Mr. Robot dives into its setting like a dog into a pile of dry leaves, giving us everything from cracking passwords with Kali Linux  to stealing badge information with RFID hacking in its quest to do justice to its setting.

Revel in your setting. Roll in it. Grab handfuls of setting and toss it into the air. The more you indulge your esoteric knowledge, the richer and more colourful the background to your drama will become.

Mr. Robot does not hesitate to think large. Elliot’s personal challenges (which include drug addiction and making out with his sister) make for an intriguing character arc, but these are just a sideshow compared to the main event—namely Cancelling All Debt. Many, many times in drama creators try to beef up the importance of a story by claiming it’s a metaphor for something bigger, usually AIDs or man’s inhumanity to man, when what we really need are stories that are actually about AIDs or the consequences of war on ordinary people or the toxic effects of white privilege or whatever.

Audiences respond to the personal in stories because that’s how we relate to the narrative — by seeing it play out in the lives of others (although we can still appreciate a narrative without the personal, for example in a film like this ). But that’s no excuse for ignoring the bigger picture, or hoping that the audience will guess that there is one. Mr. Robot doesn’t hold back from making its characters very small fish in an extremely big and dangerous pond. The risk with this scenario is that our credulity as an audience will be stretched — how likely is it really that someone like Elliot could bring down the entire banking system? we might ask ourselves in a slightly worried way — but agile writing and enough impetus in the flow of events (see above) will wash away those doubts and make us feel we’re living in a story where the outcome really matters.

Don’t think small in your fiction. If you want to tackle big issues, tackle them. The world has enough books about marriage breakdown, unrequited love and lost dogs. The world can never have enough books about untrammeled greed, global destruction and the nature of evil. Write about those instead.

And if anyone is concerned that the second season of Mr. Robot, scheduled for summer 2016, might fail to measure up to the first, here’s what showrunner Sam Esmail has to say about the direction it will take:

“What would happen to society…if the consumer-debt industry were to be erased? What are the economics of that? What would the world look like? Would there be a revolution? Would governments take over? To me, that canvas was something I was interested in exploring, so for me, that’s what that last scene sets up. We’re about to watch Rome burn.”